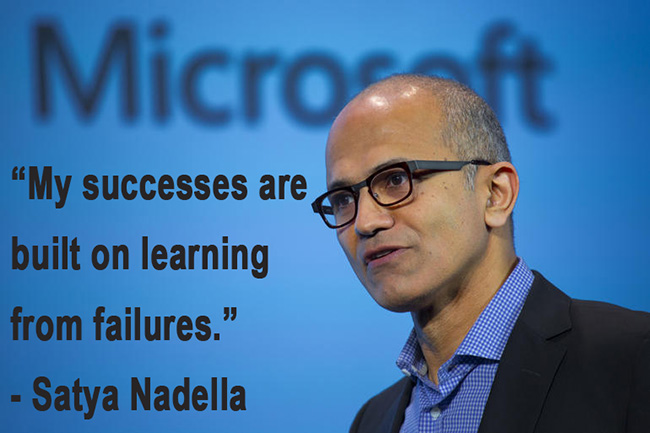 Dec 28 (IANS) Microsoft chief executive officer Satya Nadella on Monday said that his successes are built on what he learnt from failures.

In a brief but frank chat with young entrepreneurs at T-Hub, he shared his thoughts on how Microsoft plans to help startups, importance of last mile connectivity and failures.

“It’s not about the failure, it’s about learning from the failures. Failure itself cannot be celebrated. When I think about my career, my successes are built on learning from failures,” he said when a youngster asked him about how to deal with failure.

The head of the global tech giant delivered a peptalk to a selected gathering of startups at T-Hub, billed as India’s largest technology incubator.

He advised startups to keep three important points in mind – to not lose out on the concept that drives them, capability that you need to build to chase after that concept, have that persistence and to curate the culture they drive in their organisation on a constant basis.

Nadella added that culture can never be faked, especially in a small organisation like startups. “The more you live it, the more sustainable your business approach becomes,” he said.

The Microsoft CEO, who went around the facility, was impressed, and expressed appreciation for the space for entrepreneurs in his own hometown.

“It’s an amazing space for entrepreneurs and it’s also inspiring to see that the government here is trying to build a facility such as this for startups.”

“When I grew up here, there was no T-Hub probably, the closest to T was the Tank bund,” he said when IT Minister K. T. Rama Rao introduced Nadella as the Hyderabadi.

Describing Hyderabad as a vibrant city, Nadella said wherever he goes he feel elated when people refer to the strides it has made.

“We are here to be a part of your success, with our accelerators where we aim to work with T-Hub. But most of all, I’m here to be inspired by your dreams,” he said.

The budding entrepreneurs were excited to see and hear the world’s most influential person in the IT industry.

“Seeing him from that close, hearing him and getting a chance to interact with him itself was fascinating,” said Arshad Azhar, who has a startup at T-Hub.

Indian businesses to the aid of Ethiopian returnees