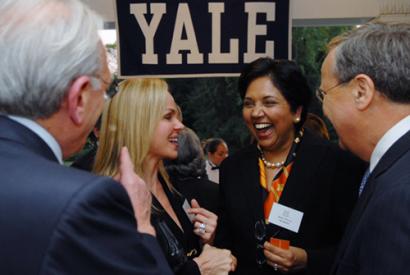 Washington, Jan 13 (IANS) Indra Nooyi, the Indian-born PepsiCo Chairperson & CEO, has become the Yale School of Management’s biggest alumni donor with a ‘landmark gift’ to endow the deanship at her alma mater.

Chennai-born Nooyi, 60, who graduated from the school in 1980, has made the gift to also inaugurate the Fifth Decade Innovation Fund, the school announced.

The fund is an ambitious initiative designed to advance the school’s aim of developing leaders with the broad global mindset and multi-disciplinary approach to business that is needed to succeed in 21st-century capitalism, the school said

With this gift, Nooyi becomes the most generous graduate of Yale School of Management in terms of lifetime giving to the school. She is the first woman to endow the deanship at a top business school.

“My experience at the Yale School of Management forever altered the course of my life,” said Nooyi, who has served as chief executive officer of PepsiCo since 2006, and chairperson since 2007.

“My gift to this wonderful institution pales in comparison with the gift that Yale gave me-the fundamental understanding that leadership requires an expansive worldview and a deep appreciation of the many points of intersection between business and society.

“Business issues are never just business issues, and my most ardent hope is that this endowment will teach future generations of leaders that the most successful companies of tomorrow will do more than make money.”

“They will make a difference and create shareholder value by improving the quality of life in every market in which they operate,” said Nooyi.

Edward A. Snyder, the inaugural Indra K. Nooyi Dean has led the Yale School of Management since 2011 and was recently appointed to a second five-year term as dean.

“Indra Nooyi has become a leading voice among Fortune 500 CEOs in no small part because of her willingness to take a stand on the broader purpose of the corporation, while delivering top-echelon performance,” Snyder said

“Indra Nooyi’s sense of purpose, deep engagement with civic life, and pursuit of excellence exemplify the kind of leadership in service to society that we hope all Yale graduates will achieve,” Yale University president Peter Salovey said.

Before joining PepsiCo in 1994, Nooyi worked in senior roles at Asea Brown Boveri, Motorola, and the Boston Consulting Group.