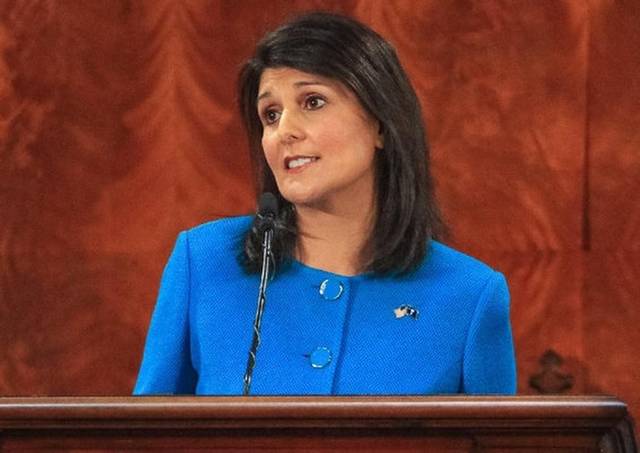 Washington, Jan 13 (IANS) Citing her own success story as a daughter of Indian American immigrants, South Carolina’s Republican governor Nikki Haley took a swipe at her own party’s presidential frontrunner Donald Trump for his anti-immigrant rhetoric.

“No one who is willing to work hard, abide by our laws, and love our traditions should ever feel unwelcome in this country,” she said giving the Republican response to President Barack Obama’s State of the Union address on Tuesday night from the governor’s residence in Columbia, South Carolina.

“During anxious times, it can be tempting to follow the siren call of the angriest voices… We must resist that temptation,” Haley said without naming Trump, as she warned against rhetoric that would threaten “the dream that is America”.

Trump, who has been leading the polls for months, has vowed to deport an estimated 11 million immigrants, build a wall on the border with Mexico and after the Paris and St. Bernardino terror attacks gave a call to temporarily ban the entry of all Muslims into the US.

“The foundation that has made America that last, best hope on Earth hasn’t gone anywhere. It still exists. It is up to us to return to it,” Haley said.

“For me, that starts right where it always has: I am the proud daughter of Indian immigrants who reminded my brothers, my sister and me every day how blessed we were to live in this country.”

“Growing up in the rural south, my family didn’t look like our neighbours, and we didn’t have much,” she said.

“There were times that were tough, but we had each other, and we had the opportunity to do anything, to be anything, as long as we were willing to work for it.”

“My story is really not much different from millions of other Americans,” Haley said.

“Immigrants have been coming to our shores for generations to live the dream that is America. They wanted better for their children than for themselves.”

“That remains the dream of all of us, and in this country we have seen time and again that that dream is achievable.”

“At the same time, that does not mean we just flat out open our borders. We can’t do that. We cannot continue to allow immigrants to come here illegally,” she said.

“And in this age of terrorism, we must not let in refugees whose intentions cannot be determined,” Haley said, giving a call for fixing “our broken immigration system”.

“That means stopping illegal immigration. And it means welcoming properly vetted legal immigrants, regardless of their race or religion,” Haley said. “Just like we have for centuries.”

While the Republican National Committee and many 2016 presidential contenders praised Haley’s response, some conservatives were critical of her apparent references to Trump.

In a series of tweets, radio host Laura Ingraham blasted the party and Haley for the rebuttal, which she said was more of a rebuttal to Donald Trump than Obama.

“The country is lit up w/ a populist fever & the GOP responds by digging in, criticizing the GOP (Republican) candidates dominating polls?! NOT SMART.”‘

“To the glee of our corrupt media, Nikki Haley is attacking our own frontrunner. The GOP Establishment is garbage,” tweeted Breitbart columnist John Nolte.