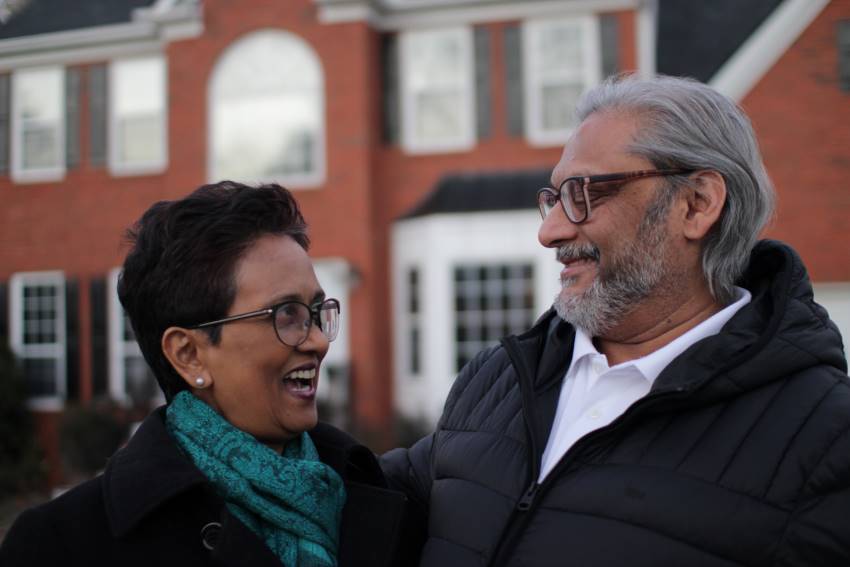 It is very filmy to say: In love I can even give my life (tere liye jaan de doonga). But is it that simple to part with one’s kidney for real?

This story of unconditional love, courage and sacrifice originates in two separate continents. Premila Jang in Mauritius and Vasu Achar in Mysore, India.

Premila, who came to India in pursuit of a Ph.D. in Biological Sciences, met Vasu at the University of Mysore, where he was pursuing his graduate studies. They fell in love, and once married, were seeking a place to begin their lives and careers to build a family. They moved to Durban, South Africa for a while, where their sons Abhishek and Abhijeet were born.

Their journey finally brought them to the US, after a short stint in Toronto, Canada. Premila is currently a professor at the Kennesaw State University (KSU) and continues her research as well as teaching. Vasu has a corporate job.

In late 2018, Vasu was diagnosed with a rare infection, that caused his kidneys to deteriorate at an alarming rate. Top US doctors left him with two choices: either to consider dialysis or find a donor for replacement. Neither of the options were favourable or achievable in the short term. Dialysis becomes a permanent crutch for the kidney function, creating complications in the near future and the lag for the right kidney-match donor is about six to seven years on average.

But love is a powerful force. Premila decided to part with one of her kidneys for Vasu. By divine grace, her kidney matched with Vasu’s.

Vasu’s sons also immediately offered to donate their kidneys, but their father refused their offer. “They were too young and had their whole lives ahead of them,” he told this writer.

Abhishek is a Senior Neurology Resident at North Shore Hospital in New York and Abijeet  is an Emmy award winning actor.

The screening process began, whilst the family was awaiting results. [Out of respect for the doctors, the name of the hospital is intentionally not mentioned here.]  Once at the hospital, doctors discovered that Premila’s kidney was not anatomically compatible with Vasu’s. It was too narrow to fit Vasu’s body.

Confused and upset with the new challenge facing them, the Achars flew to India where Vasu knew a friend, who was now a top surgeon, and requested him to review the gathered data.

In the meantime, Abijeet, unbeknownst to his father, had also undergone the screening process and by sheer divine magic, was also certified as a great match for his father’s kidney replacement. Armed with that certainty and knowing that Vasu had refuted his offer earlier, out of concern for his wellbeing at such a young age, he issued an ultimatum to his parents: either they sort out a solution quickly and to their satisfaction, or he would prepare to donate his kidney.

The group of Indian doctors including his friend, were absolutely confident of Premila’s match regardless of the anatomical misfit. Furthermore, they agreed to do the transplant in India, in case the group in US remained hesitant.

Returning to Atlanta, they shared their findings with the original group of doctors at this highly noted hospital. With change in leadership at the top, the hospital was willing to give it another look and opinion, with the Indian doctor’s input.

Eventually they agreed and a transplant surgery was carried out on 14th February, 2019. Vasu was in surgery for more than six hours, and simultaneously, Premila was also in the operation theatre for a little more than four.

Tensions ran high among family and friends, but prayers soothed the tension. The transplant was successful, but both were weak and needed tender loving care. Although the Indian-American community at KSU is small, they are a caring family and they all took turns bringing food for the family, and following up with the couple very regularly.

At this one-year anniversary, both seem to be recovering well and the love and respect between them has grown beyond bounds.

Albeit monitored quite frequently and regularly, Vasu and Premila’s results are positive and further underscores how truly committed they are to their marriage vows and how lovely the fruits of their love, bear. In frankly discussing the litany of issues they experienced and to demystify such a crucial organ transplant, I learnt of the do’s and dont’s.

Quite candidly both of them explained, having lived through it: it is perfectly “OK” to live with one kidney and if the other can save a life, there couldn’t be a better blessing. And, that taking more than one opinion is always helpful in these matters and although India may not have the requisite medical technology in place, the Indian medical experts are superbly educated and understand the Indian health nuances extremely well to enable your navigation through life impacting decisions.