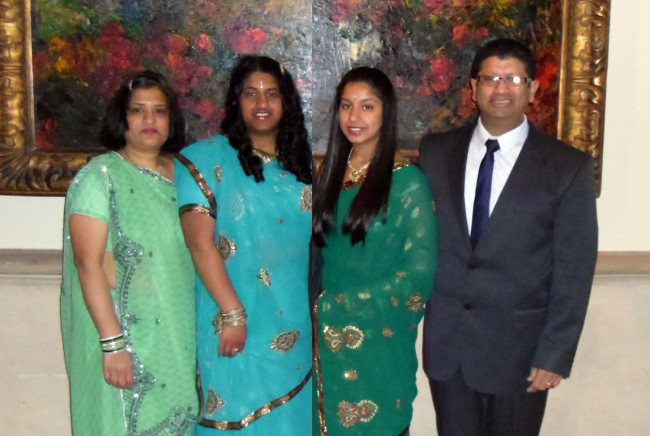 London, June 3 (IANS) An India-born IT professional in Britain stabbed his wife and two daughters to death after researching how to cut someone’s throat — then lived with their bodies for a weekend before hanging himself, an inquest has heard.

Jitendra Lad, 49, his wife Dukshaben Lad, 44, and their daughters Trisha, 19, and Nisha, 16, were discovered at their home in Clayton, Bradford, last October days after celebrating Diwali, the Daily Mail reported on Wednesday.

Lad had researched on depression and how to cut someone’s throat on the internet in the days leading up to the tragedy, an inquest into the deaths was told.

Lad was found hanged and the three other members of the “model” family had all been stabbed in their beds with a knife, in what a coroner described as a “scene of unimaginable horror”.

The Bradford Coroner’s Court heard that Dukshaben, also known as Daksha, and her two daughters were probably killed in the early hours of Saturday, October 25.

But Lad was seen by a number of people later the same weekend and probably killed himself on Monday afternoon, two days later, the court heard.

The hearing was told how Lad had no medical history of mental illness and relatives and friends said they appeared to be a normal, loving family.

The hearing also heard that Lad had been stressed at work as an IT manager, and was concerned he had been over-promoted.

The inquest heard how the bodies were discovered at the house when Daksha’s father became concerned when no one was answering their phones and went round with a neighbor.

She wanted to fly, I let her fly: Kalpana Chawla’s dad