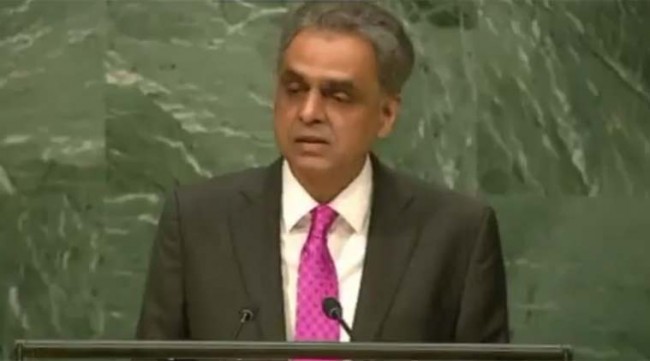 United Nations, July 28 (IANS) India has condemned countries playing the terrorism “card” in international relations and criticised the double standards in dealing with terrorists while warning about the emerging “apocalyptic” threats.

“Terrorism is an international threat that should not be allowed to serve national strategy,” India’s Permanent Representative Syed Akbaruddin said on Friday during a General Assembly debate on the report of Secretary-General Antonio Guterres on Global Counter-Terrorism Strategy.

“We must resist the temptation of buying individual peace for ourselves by striking deals that divert terrorists elsewhere,” he said without naming any country. “We need to intensify our efforts in persuading States to refrain from using terrorism as a card in the games that nations play.”

Calling for a introspection by the members of the UN, he said: “There are important issues today before the international community that beg answers: Where do potential terrorists go for training? How does their financing work? Do we know the answers and yet choose to look away?

“The dangers of discriminating among terrorists — good or bad or yours and mine — are well known.”

The other aspect of the double standards in dealing with terrorism was geographic, he said.

“Our reaction to terrorism in some geographies is different from others. We are currently witnessing the impact of the Middle East on Europe,” he said. “In South Asia, we are witnessing the international community’s efforts of combating terrorism being affected by a fatigue of a long-drawn war in Afghanistan.”

He urged all nations to adopt the Comprehensive Convention on International Terrorism, which has been under futile negotiation for 21 years.

In a world struggling with the traditional weapons used by terrorists, new “apocalyptic threats” are emerging from the potential adoption of nuclear, radiological and cyber weapons by terrorists, he said underlining the urgency of adopting the convention.