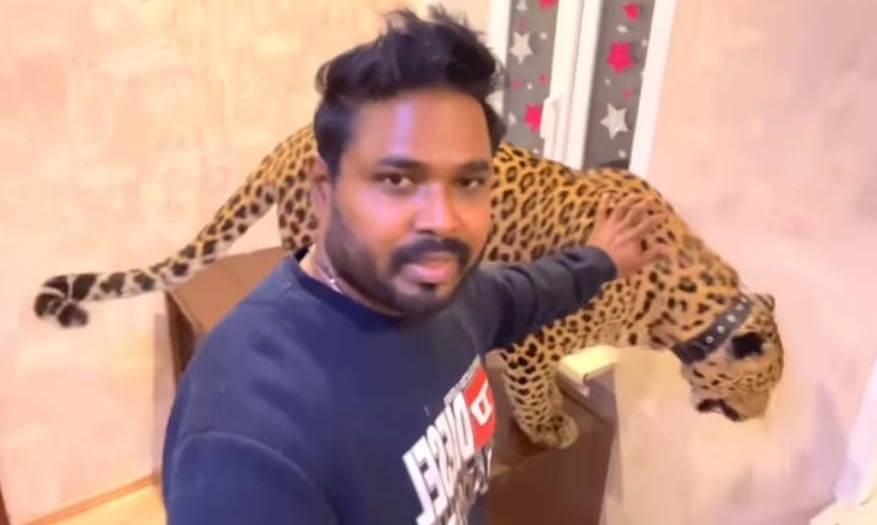 Hyderabad, March 10 (IANS) Though hundreds of Indians have battled all odds to return home from war-torn Ukraine, a doctor is not ready to leave without his pet big cats — a black panther and a jaguar!

Giri Kumar Patil, a physician, has been holed up in a basement at his home in Donbas region with not just ‘Yagwar’ and ‘Sabrina’, but also Italian dogs.

Hailing from Tanuku in West Godavari district of Andhra Pradesh, Kumar has been living in Severodonetsk, a small town located in the Donbas region of eastern Ukraine, for over six years now.

It was in 2020 that he adopted a sick jaguar and christened it ‘Yagwar’, which is now 20-month-old. Only a couple of months ago, he adopted ‘Sabrina’, a female black panther. He bought both the big cats from Kyiv Zoo for $35,000.

According to Kumar, ‘Yagwar’ is a cross breed between a male Amur leopard and a female black jaguar and is a most endangered species.

Caught in the midst of war, Kumar, a practicing orthopedic doctor, is more bothered about the safety of his pets. He has been regularly posting videos on his YouTube channel about the condition of the pets and the efforts he is putting in to take care of them.

Kumar went to Ukraine in 2007 to study medicine, and has been there since 2014. He works with a government hospital in Severodonetsk, which was shut after the war began.

Though his relatives and friends in India are concerned about his safety, for Kumar, the safety of his pets is equally important.

“I treat them as my own kids. I bought them when they were little and orphaned. How can I leave them behind,” asked Kumar, who lives alone at his home.

In one of the videos, Kumar said ever since the war broke out, he has been stepping out to buy food for his pets. However, buying food has also become difficult due to Russian attacks in the region. There is a food shortage and the prices have skyrocketed.

The 40-year-old is worried over the wellbeing of his pets as they are scared due to the continuous bombing in the area and are eating less. He vows to take care of them till his last breath.

Though no official from the Indian Embassy has approached him for evacuation, Kumar made it clear that he will not leave Ukraine without his pets.

He doesn’t believe that Indian authorities will offer to evacuate them along with him.

Kumar was inspired by the role of his favorite actor, Chiranjeevi, in a Telugu film in which he adopts a leopard.

Kumar has a YouTube channel — ‘Jaguar Kumar Telugu’ — with over 95,000 subscribers. For the last two weeks, he has been documenting his experience of taking care of the big cats during the war.

He claims to be the only Indian in the world successfully raising the most endangered and dangerous big cats.

“My all-time dream is to raise endangered big cats like Sumatran tigers and Amur leopards and jaguars,” he wrote and sought sponsors/funding for his dream project.

Meanwhile, superstar Chiranjeevi has written to Kumar praising him for his resolve to stay back in the war-torn country for the sake of his pets.

“I am delighted and touched to learn that your love for jaguars and panthers was inspired by me. It is truly heartening that you are not willing to leave them behind during this unfortunate war time and chose to stay back in Ukraine for the sake of care giving to your pet panther and jaguar. Your compassion and love for these wonderful creatures is highly admirable,” wrote Chiranjeevi.

“I pray for your safety during this challenging period and wish the war ends soon and normalcy is restored at the earliest. Meanwhile, please stay safe and look after your pets. God Bless,” he added.

Two Indians drown in separate incidents in the US