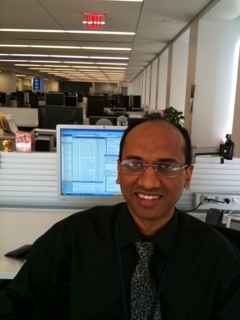 New York, April 22 (IANS) A software engineer of Indian descent shared The Wall Street Journal’s Pulitzer Prize for investigative reporting in growing recognition of the importance of using information technology tools for reporting as well as for presentation.

Palani Kumanan, who is a software architect and technical lead with Dow Jones that publishes the Journal, was a part of the winning project’s graphics team, according to Michael Siconolfi, the newspaper’s investigations editor.

The Journal won the top journalism award announced Monday for its mammoth investigative project, “Medicare Unmasked.” The series mined data obtained from the US government after a prolonged legal fight.

The Journal articles exposed fraud and waste in Medicare, the government health insurance program covering about 43 million senior citizens and about 9 million people with severe disablities. The exposures led to Congressional inquiries and criminal prosecutions.

Kumanan, a graduate of the PSG College of Technology in Coimbatore, Tamil Nadu, developed the interactive database on Medicare billing used to analyse government payments made to over 880,000 medical service providers, including doctors and hospitals. From the this mountain of data, readers were also able to use an interactive database created on the newspaper’s website to find for themselves information about various medical service providers and analyse it.

In the digital age, coding and software applications are becoming essential journalism tools and training institutions have begun incorporating them into journalism curriculum. Columbia University’s Graduate School of Journalism, for example, has been offering a dual-degree program in journalism and computer science.

Journal’s Geeta Anand, who is now based in India, shared a Pulitzer in 2003 for reports on corporate scandals. The next year, a series on rationing in healthcare that she worked on was a Pulitzer finalist.

Last year, Vijay Seshadri won the poetry Pulitzer Prize for his collection, “3 Sections,” and in 2011, Siddhatha Mukherjee, a doctor and medical researcher, received the Pulitzer non-fiction book award for “The Emperor of All Maladies: A Biography of Cancer.”