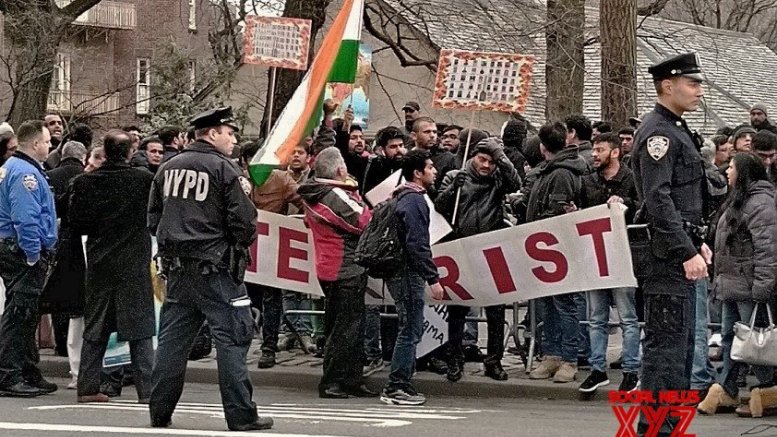 New York, Feb 23 (IANS) Members of the Indian community have held protests outside the Pakistani consulates in New York and Chicago to condemn the February 14 Pulwama attack that claimed the lives of 40 CRPF troopers.

In New York on Friday, the police stopped 400 protesters from approaching the consulate building and cordoned them off next to Central Park, across the avenue.

They protested peacefully for over two hours shouting “Vande Mataram” and “God Bless America” along with slogans denouncing Pakistan’s support for terrorism.

A delegation went to the consulate to handover a memorandum demanding “credible and visible” action against the perpetrators of the Pulwama carnage that was claimed by the Pakistan-based Jaish-e-Muhammad (JeM) and the 2008 Mumbai terror attack that claimed 163 lives.

Overseas Friends of BJP-USA (OFBJP) President Krishna Reddy Anugula said that the diplomats at the consulate refused to accept the memorandum, which also asked for freedom for Kulbhushan Jadav, who has been sentenced by a Pakistani military court as a spy, and for handing over JeM chief Masood Azhar and Dawood Ibrahim, who is wanted for 1993 terrorist bombings in Mumbai, to India.

On Thursday, community members held a demonstration at the Chinese consulate in Chicago against Beijing’s policy of protecting JAzhar from UN sanctions through its veto powers.

Jagdish Sewhani, the president of the American India Public Affairs Committee, and one of the organisers of the New York protest, said that his group was organising a nation-wide outreach campaign to members of Congress to sponsor legislation against Pakistan’s support for terrorism.

Members of his group and other Indians have been asked to call on their legislators or write to them seeking action against Islamabad, he said.

The Federation of Indian Associations organised a candle-light vigil in Woodbridge, Virginia, on Thursday to honour the Pulwama victims.

Earlier in the week, OFBJP organised the screening of Bollywood film “Uri” to raise awareness of terrorism in the sub-continent. .

Across the US, Indian communities have held vigils and prayer services for the victims, including in Atlanta, Georgia; Naperville, Illinois; Sacramento, California’ and Houston, Stafford and Woodlands in Texas.