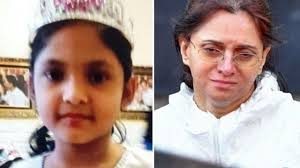 Washington, June 4 (IANS) An Indian-origin woman has been sentenced to 22 years to life in prison for strangling her 9-year-old stepdaughter in a bathtub in 2016, a crime described by a US court as a “disturbing” example of “extreme violence”.

Shamdai Arjun, 55, of Queens, New York, was sentenced on Monday after being convicted in May of second-degree murder for killing Ashdeep Kaur. She will spend 22 years to up to life behind bars for the August 2016 killing.

Queens Supreme Court Justice Kenneth Holder handed down the sentence in a case he described as a “disturbing” example of “extreme violence” and suffering, Queens Daily Eagle reported.

Ashdeep Kaur had moved from India to be in the care of her father Sukhjinder Singh and his wife in 2016. Family members said the girl told them about past abuse at the hands of her stepmother.

“It’s disturbing to consider how you placed your hands around the neck and throat of that child and squeezed without letting up until her body went limp,” Justice Holder said at sentencing.

“The suffering this child endured as she was being killed is unimaginable, and to boot you were the last face she had to look up and see before she died.”

Acting Queens District Attorney John Ryan said: “The defendant in this case goes beyond the tales of evil stepmothers. This defendant committed the unimaginable – she wrapped her hands around her stepdaughter’s little neck and squeezed the life out of her.

“The victim was an innocent child and just nine years old. The court has imposed a sentence that will likely guarantee this woman never sees freedom again. The sentence of the Court is more than warranted in this tragic case,” Ryan said.

According to trial testimony, Arjun left her home in the Richmond Hill section of Queens on August 19, 2016 around 5.30 p.m. with her former husband and two grandchildren, ages 3 and 5.

Asked about the 9-year-old victim’s whereabouts, she told an eyewitness that the child was in the bathroom and was waiting for her father to pick her up.

The eyewitness, who observed that the bathroom light had been on for several hours, called the victim’s father Sukhjinder Singh and was instructed to break through the bathroom door. Ashdeep Kaur’s lifeless and bruised naked body was later found in the bathtub.

The medical examiner’s office determined that the cause of death was strangulation.