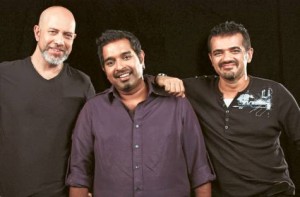 New York, NY: Shankar Ehsaan Loy, the musical trio from India, are all set to take the United States by storm during their Nine City Musical Tour starting on June 8th in Cleveland, Ohio. Organized by the American Association of Physicians of Indian origin (AAPI), the musical tour is being organized across the nation, coinciding with AAPI’s unique Obesity Awareness Program, CME Seminars and Régional Conférences in Nine Cities across the country.
Shankar Mahadevan, Ehsaan Noorani with Loy Mendonsa, who shot to fame with their with their albums, Dil Chahta Hai and most recently, Kal Ho Na Ho, which in addition to winning millions of hearts, won the trio several national awards and international recognition, are on the much anticipated Multi-City Musical Program by AAPI.
Following the highly successful tour by Shreya Ghoshal, benefitting AAPI’s charitable works and local AAPI Chapters, the current tour is being led by the popular Bollywood playback singer Shankar Mahadevan and troupe. Following the inaugral concert in Cleveland, the trio will perform on Sunday, June 9th, in Los Angeles, CA; on Saturday, June 15th, in Dallas, Texas; on Sunday, June 16th, in New York; Saturday, June 22nd, in New Jersey; Sunday, June 23rd, in Atlanta, GA; Friday, June 28th in Washington, DC; Saturday, June 29th, in Tampa, FL. The grand finale of the event will be held on Sunday, June 30th,  in San Jose, CA.
“Many of our industry partners liked this concept where they could get prime time with a few hundred doctors for product promotion/theater, non CME lectures, exhibits, booths,” Dr. Jayesh Shah, President of AAPI, says. “These multi-city mini-seminars and music concerts are a novel concept for education and recreation that will raise funds for the local chapters of AAPI, the national AAPI and the AAPI Charitable Foundation.”
In its efforts, AAPI has been joined by the Indo-American Psychiatric Association in America and the Association of Cardiologists of Indian Origin. The Seminars and workshops are being led by accomplished faculty of leading Cardiologists, Cardiovascular Surgeons and Psychiatrists.  Each of the nine medical-educational-programs is expected to have an audience of 250-400 Physicians, which will be followed by Obesity Awareness Walks, annual gala event and entertainment with over 2,500 audience at each location.
Each member of the trio brings his own talents and experiences to the group, combining the Carnatic and Hindustani vocal tradition (Shankar), Western rock(Ehsaan) and a deep understanding of fusion including a virtual mastery over the electronic synthesizer (Loy). They continue a tradition quite common in Bollywood music, that of partnerships between music composers contributing and pooling their individual strengths, often combining deep knowledge of Hindustani (North Indian) and Carnatic (South Indian) classical music with technical expertise as composers and orchestral arrangers. Shankar–Ehsaan–Loy probably represent the first trio of composers to entertain Bollywood audiences themselves with their chart-topping music.
Record producers, musicians and multi-instrumentalists, the trio have composed music for over fifty soundtracks across four languages. Among the most critically acclaimed Indian musicians, the world renowned artists have won over twenty awards, including National Film Award, Filmfare Awards, and IIFA Awards among several other awards and nominations. They are often referred to as “Amar Akbar Anthony” of Bollywood film music by several, including eminent critic Rajeev Masand.
Shankar Mahadevan, who was born and raised in  Mumbai,  learned Hindustani classical music and Carnatic music in his childhood and started playing the veena at the age of five. He studied under Srinivas Khale, a popular Marathi music composer. After graduating in 1988 with a degree in Computer Science Engineering, he worked as a software engineer on Oracle Version Six. He is the main vocalist of the trio. After working for a while for Leading Edge Systems, Shankar ventured into the field of music. He earned his first award as a playback singer in a Tamil movie, collaborating with A. R. Rahman and winning a National Film Award . A prominent star in Tamil cinema, he gained further recognition upon the release of his first music album, Breathless, in 1998.
Ehsaan Noorani is the middle name of the trio. He is the lead guitarist. Ehsaan has studied music with Bismarck Rodrigues, an experienced guitar teacher from Mumbai. He provides the SEL brand an energetic burst that is often experienced in their on-stage performances. Ehsaan is the first Indian to have endorsed a signature line of Fender guitars, one of the largest and most reputed guitar manufacturers in the world.
Loy Mendonsa is the keyboardist. He played keyboard for famous music composers such as A. R. Rahman. Shankar Ehsaan and Loy came up from the ranks of the non-film music scene, performing rock, blues, jazz and pop before entering the film music industry. Following Dil Chahta Hai, their next big venture was Dharma Productions’ Kal Ho Naa Ho, directed by Karan Johar. The album broke all the previous records as a best-selling album. The music won many awards including the National Film Award for Best Music Direction. Since then, they have frequently collaborated with Dharma Productions and its owner and director Karan Johar, including his next directorial effort Kabhi Alvida Naa Kehna, which broke the audio sales record of Kal Ho Na Ho.
For more details on the Multi-City Tour, please visit: http://www.aapiregionalconference.org
previous post