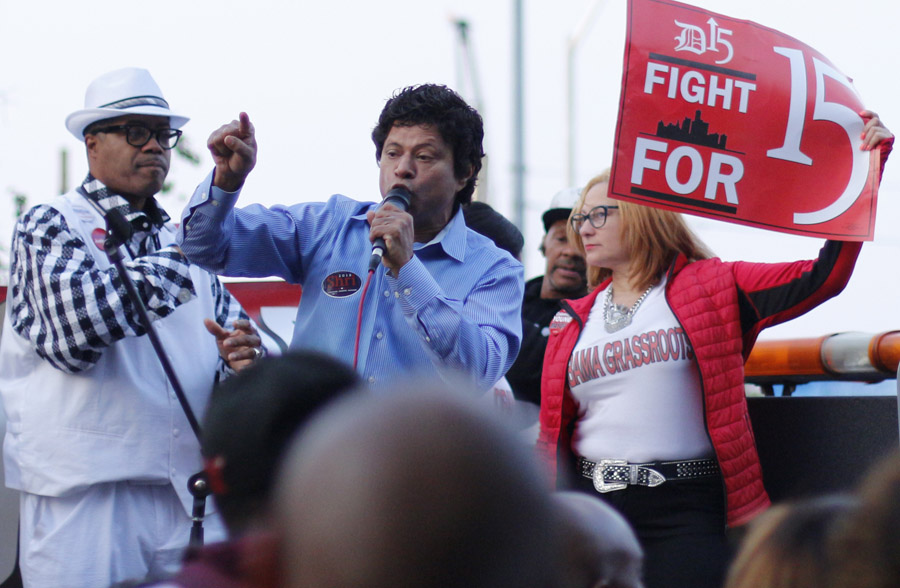 Born in Belgaum, India, Thanedar immigrated to the United States in 1979 and studied Chemistry at the University of Akron, where he soon earned his Ph.D. Living in poverty, he recounted a story of earning $300 a month, 75 of which he gave to his family back in India. This experience gave Thanedar the passion for improving poverty levels across Michigan, which is one of his goals as a politician.

“When I was growing up, I lived in a small home where we slept on the floor and we ate on the floor. Sometimes we didn’t have enough food,” Thanedar explained. “So I understood the stigma and the pain of poverty, and when I saw communities suffer in [such] a rich nation…that bothered me. I want to create opportunities for economic improvement and economic growth for those who have been marginalized, who don’t have that access.”

In 1990, Thanedar purchased a three-employee chemical analysis company named Chemir. The company quickly grew to over 400 employees and 63 million dollars in annual sales, a trend that followed him across multiple companies he founded, earning him several Ernst & Young Entrepreneur of the Year awards.

Although the Great Recession in 2008 brought Thanedar close to bankruptcy, he decided to regrow his career by founding Avomeen, another multi-milllion dollar analytical company. Thanedar attributes a lot of his entrepreneurial success to the American Dream, and this inspired him to become a politician.

“I felt that I owed something back to the people, back to this country,” Thanedar said. “When I traveled, I saw people were hurting. I saw, especially in urban areas, people did not have the opportunity to achieve their American dream. That American dream is fading, especially in urban areas; it’s fading in the black and brown communities,” he added.

One of Thanedar’s platforms as a result of his experiences is countering racism and discrimination. He told a story of wanting to open an account in a bank in the U.S., only to be told that the bank didn’t like “people like [him]” opening accounts there.

Thanedar’s platforms include improving the quality of public education for K-12 schools, creating environments of entrepreneurship in low-income communities, and raising the minimum wage. Thanedar also has a huge focus on environmental health and improving water quality, which he has already taken steps towards accomplishing.

Through his current position in Michigan’s House of Representatives, Thanedar introduced and successfully passed House Bill 5003, which focused on reducing water contamination in Michigan and protecting floodplains among other things. He also co-sponsored a bill centered around improving mental health for children in the public school system.

“I’m a chemist and I’m a scientist, and I have seen the ill effects of chemical contamination, the pollution corporations create, especially happening in more of the poorer areas,” he explained. “It’s important that regardless of where you live, what zip code you live in, you should be entitled to clean air and clean water, lead-free water.”

Thanedar also commented on the importance of mental health availability in the school system, adding, “Good mental health is just as important as good physical health, and I’m working on a bipartisan basis to improve mental health services.”

Thanedar’s biggest inspiration is his mother, who raised him and seven other siblings in extremely adverse conditions. He also looks up to President Obama, Clinton, Lincoln, and Dr. Martin Luther King, Jr., for overcoming adversity and creating opportunities for equality.

“I chose to be here because for the rest of my life, I want to devote myself to public service and making other people’s lives better,” Thanedar concluded.

The midterm elections are set to occur on November 8th, 2022, where Thanedar hopes to secure his seat in the U.S. House of Representatives.

US will work with whoever is India's next prime minister