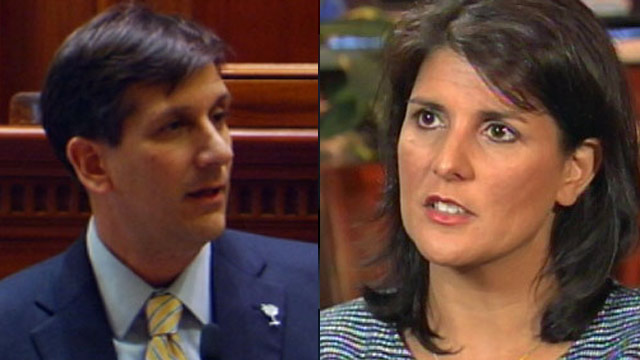 Washington, Nov 1 (IANS) Reflecting the falling standard of US politics, the Democratic opponent of South Carolina’s Indian-origin Governor Nikki Haley called her a “whore”, but more shockingly the mainstream US media largely ignored the story.

Born Nimrata Nikki Randhawa, the daughter of Sikh immigrant parents, herself addressed her opponent’s sexist comments this week saying Vincent Sheheen’s laughter after “accidentally” calling her a “whore” was like “a kick in the gut.”

But the Washington Post blog ‘The Fix’ chose to ignore the larger issue.

It instead focused on the ‘unhappiness’ of Ann Romney, the wife of President Barack Obama’s 2012 Republican opponent and how Sheheen had become a headache for the Democrats.

“Sheheen accidentally said the word ‘whore.’ And Ann Romney is not happy about it,” the Fix wrote suggesting Sheheen “tripped over his words in a stump speech lambasting” Haley.

“You probably haven’t heard much about” Sheheen “for one simple reason:

He has virtually no shot of unseating” Haley, it said.

“But now Sheheen has become a headache for Democrats nationally after calling Haley a ‘whore’ on the stump.”

USA Today cited WIS-TV for Haley’s comments about State Senator “Sheheen’s use of the sexist slur, captured on video last week by the Morning News in Florence, South Carlolina.

The chuckling came when the crowd responded to his remarks with applause.

Sheheen apologized during a radio appearance Monday, saying his words were “garbled” “but the damage was done,” USA Today commented.

Ann Romney blasted Sheheen’s original comment and called it “unacceptable” in an interview with CNN. Republican senator Ted Cruz, denounced what he called a “personal attack” on Haley, his friend, in a Facebook post.

Sheheen’s “gaffe” it said “has since erupted into a major story (and a major problem for Sheheen’s already flagging candidacy).”

“I haven’t spent a lot of time on this and you have not heard me talk about it and it’s because whether it was a gaffe or not, I really don’t care,” Haley was quoted as saying at a news conference.

“I’m a tough girl, I can handle that. The laughing afterwards (though), was a kick in the gut. The comment that sometimes you’ve gotta tell the truth, that was tough. But, having said that, I’m not going to waste my time on that.”

But NewsBusters, which calls itself a “media watchdog in documenting, exposing and neutralizing liberal media bias” lambasted the mainstream media for ignoring the story.

If a Republican candidate “had said anything like that, it would become national news story more important than even Ebola within minutes,” it commented.

“So why is it only news at about a dozen web-based centre-right outlets” it wondered.