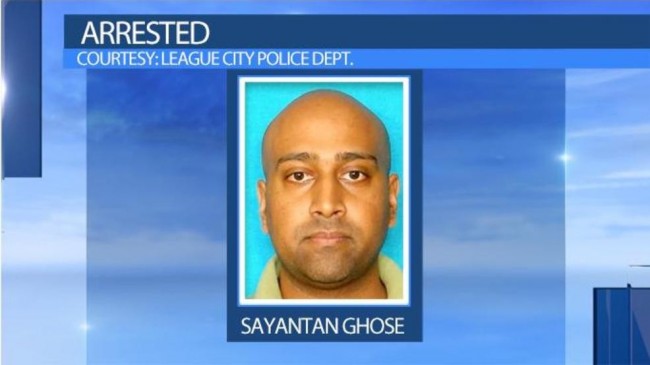 Sayantan Ghose, 41, was arrested at a border checkpoint near Las Cruces, New Mexico, on Thursday and was charged with the murder of Clarence Wayne Harris II and an aggravated assault of Harris’ wife Amanda, police officials said.

The shooting was reported around 9 p.m. on Wednesday at a home in Mayhill Ridge Lane during an argument between Ghose and the two residents, ABC-owned television station KTRK reported.

According to the League City police, officers found the body of Clarence Wayne Harris II, who had been shot seven times, lying in the driveway in front of the house.

Amanda Harris, Ghose’s ex-wife, was also found suffering from two gunshot wounds and was taken to a hospital for treatment.

The police said that there was a party at the house and that at some point the man and woman began arguing with Ghose, which led to the shooting.

In an affidavit, Amanda Harris said she called the police shortly before 9 p.m. She told police that she was going to make a citizen arrest because her ex-husband, Ghose, was at her doorstep.

The woman also told the police that Ghose had been stalking her for years. A bail of $150,000 was set for Ghose.

From the land of baseball, tributes to India's 'cricket God'