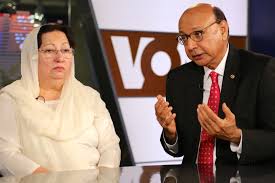 Washington, Oct 26 (IANS) The father of a Muslim-American army captain, has come out in support of Democratic presidential candidate Hillary Clinton and will campaign for her this week, media reports said.

Khizr Muazzam Khan, 66, is father of United States Army Captain Humayun Khan, who died while serving in the 2004 Iraq War.

Khan will campaign for Clinton in Virginia on Wednesday, meeting with community leaders, veterans and military families at a mosque and a local restaurant during three stops in Norfolk, the Los Angeles Times reported.

During the Democratic National Convention held in July, Khan blasted Trump for his divisive remarks and proposal to temporarily ban Muslims from entering the country and implored voters to vote for Hillary Clinton, the Democratic presidential nominee.

Trump responded by implying that Ghazala Khan, who accompanied his husband on stage on the final day of the Democratic National Convention, was forbidden to speak by his husband.

Last week, featuring in an emotional 60-second campaign advertisement for Clinton, he shares the story of his son’s death and asks Donald Trump: “Would my son have a place in your America?”

Colorado teen Gitanjali Rao is TIME ‘Kid of the Year’