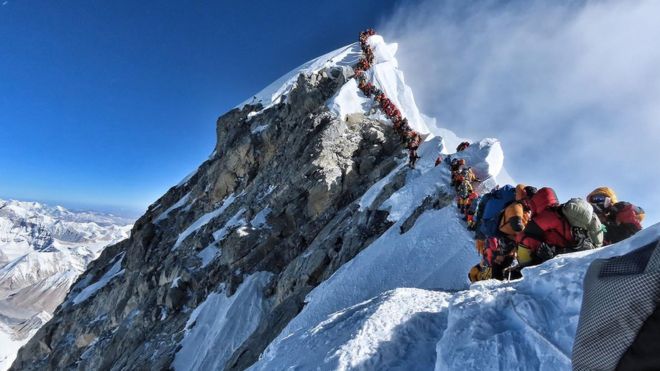 Atlanta, GA, May 31, 2019: Two Indian-American climbers made it safely to the summit of Mount Everest and back, in a climbing season that has seen 11 deaths.

Rakesh ‘Rock’ Patel, MD, a resident of Ann Arbor, Michigan and Gurinder “Ricky” Singh, a businessman from Newark, NJ returned to the States after their challenging climb to the highest peak on the planet and descent back to base camp.

It took Dr. Patel and his group of 22 about ten weeks of climbing to get to the summit of Mount Everest at 29,000 feet.

“I never thought it would be reality. You know when you think about something for so long and the moment actually arrives, I was on the verge of tears when I got to the south summit. I’ve only seen pictures and read about it. It was just so surreal being there,” Dr Patel told MLive.com.

Dr. Patel, an Assistant Professor in the Department of Orthopaedic Surgery, Spine Division, at the University of Michigan, said he passed several dead bodies on the way up the mountain. He said weather and the inexperience of many climbers also were contributing factors, as was overcrowding.

Dr. Patel told MLive his group decided to wait to reach the summit after the long lines subsided, but that also meant they faced tougher weather conditions on the way down, when it got very windy and visibility dropped.

Dr Patel, who grew up in Queens, New York has now climbed the highest mountains in five of seven continents and hopes to join the “7 Summit Club” by conquering Antarctica and Australia in the near future.

The doctor-climber said he is excited to return home to be with his wife and 9-year-old daughter.

Gurinder Singh told Delaware Online he spent three years training to summit Mount Everest. He made trips to Nepal twice a year for six weeks at a time. He climbed smaller mountains in preparation, including Mount Manaslu, the eighth-largest summit in the world.

He said scaling Mount Everest was on his bucket list of things to do before 50. However, once he got there, his focus was to get back to his family safely.

At least 11 mountaineers have died in 2019 while trying to realize their dream of reaching to the summit of Mount Everest.

American lawyer Christopher John Kulish, 62, died in May after reaching the top of Everest on the Nepalese side of the mountain in the morning.

While descending, he was strong and safely reached the South Col (situated at an altitude of 25,918 feet) late Monday evening before he suddenly died.

Also in May, an Austrian family confirmed the death of one of their relatives. Sixty-four-year-old Ernst Landgraf died hours after fulfilling his dream of scaling Everest.

Mountaineers have suggested difficult weather conditions, a lack of experience and the growing commercialization of expeditions as contributing factors to the backlog.

During the week beginning May 20, crowds of climbers became stuck in a queue to the summit, above the mountain’s highest camp at 26,247 feet. The summit of Mount Everest is 29,029 feet high, CNN reported.

Most people can only spend a matter of minutes at the summit without extra oxygen supplies, and the area where mountaineers have been delayed is known to many as the “death zone”.

‘When will I get home?’ wonders Rishi Kapoor