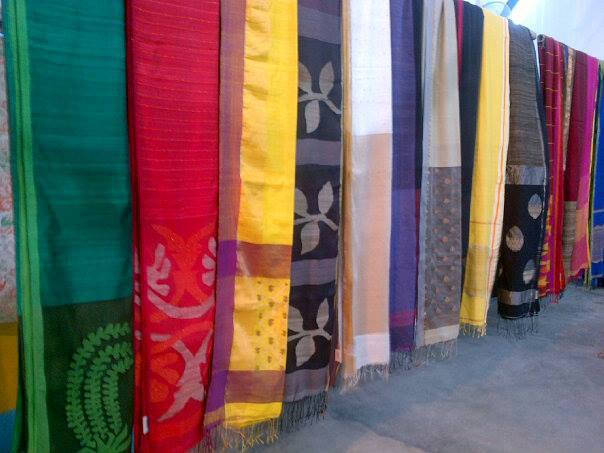 Kolkata, Oct 6 (IANS) Whether it’s the trend-setting palazzo pants for youngsters or the evergreen sari, natural and organic fabrics adorned with prints in vegetable dyes will dominate the fashion scene this Puja, as the going-green mantra increases among shoppers in this eastern metropolis.

Reflecting a paradigm shift, cotton, silk, jute and linen have become conversation pieces among the fashion conscious. Instead of garments crafted out of synthetics, the focus is on comfort, style and a sustenance of indigenous handloom products.

And with design houses across Kolkata reinventing traditional motifs and cuts to suit contemporary tastes, these handcrafted clothes are getting a much-needed revival.

“There has been a shift…people are opting for light, breathable natural fabrics as awareness about them has increased significantly,” said store manager Saarra Imtiaz of Sasha.

Bappaditya Biswas, one of the designers of Byloom, an apparel and lifestyle store, broadly agreed but called for factoring in the preference for exclusivity. Similarly, functional clothes made out of green or organic textiles are slowly finding a firm footing.

“Everyone wants to look different in the festive season and with mass-produced garments this is not achieved. Since each handloom product is a one-of-a kind creation, that speciality remains,” said Biswas, whose store has introduced a puja special range for men.

With stores stocking up on kurtas, tunics, sarees and the season must-have-parallel pants or palazzos, there are options galore. Traditional attire for men like dhotis and kurtas, crafted from these fabrics, are also on the radar.

So, airy palazzos in floral prints, teamed-up with classy embroidered leather sandals, available in major open air markets of the city, are a perfect combo to beat the heat while pandal-hopping this Puja. Embroidered khadi jumpsuits, a special from Sienna boutique, are a great way to project the Indo-Western touch.

“One can also choose to drape up in stoles crafted from organic fabrics,” Imtiaz noted.

Durga Puja, the biggest festival in this part of the world, would be celebrated October 10-14.

According to Hindu mythology, Goddess Durga, accompanied by her four children – Ganesh, Kartik, Lakshmi and Saraswati – descends to earth every year to visit her parents. This is the occasion that the Puja celebrates.

Durga, it is believed, stays for five days to eradicate evil from earth before returning to her husband, Lord Shiva, at Kailash on Dashami (10th day).

Durga, the slayer of the demon Mahishasur, sits astride a lion and wields an array of weapons in her 10 hands.

The religious fervor means ethnic wear is the chosen dress code and for women working during the Puja days, there is good news – light and easy to drape linen saris are up for grabs at some stores, whereas linen sarees with silk borders at Jailakshmi’s heritage saree shop are a steal.

Other seasonal favourites, according to Rajesh of Jailakshmi’s, are the jute-patola silk and the golden-bordered and printed ghicha silk sarees that are a rage among youngsters.

Moreover, one can choose to sport the slowly-dying ‘naksha border’ saris. Naksha basically means artistic pattern and sarees with such borders are hard to find.

For men, less is more this season.

A simple sleeveless jacket or waistcoat in bright colours or raw silk kurtas with minimalistic embroidery around hemlines will do the trick.

Dayaram and Sons at the labyrinthine New Market has stacked up such kurtas.

“The favourite colour theme seems to be bright blue, leaf green, slate and maroon. Most of our customers look for breathability as the weather in the city is mostly humid. Bandhgalas and mandarin collars are popular too for evening wear whereas striped khadi kurtas are easy to wear during the day,” said a salesperson at the shop.

To jazz up the nights, customised digital printed kurtas – they come at a price – can be ordered online as well as at local showrooms.

Not only adults but tiny-tots can also strut their stuff with dhotis, kurtas and saris available in small sizes. The pre-stitched dhotis and sarees for the toddlers ensure they can move around freely.

A joint venture to check heart attacks in India, US