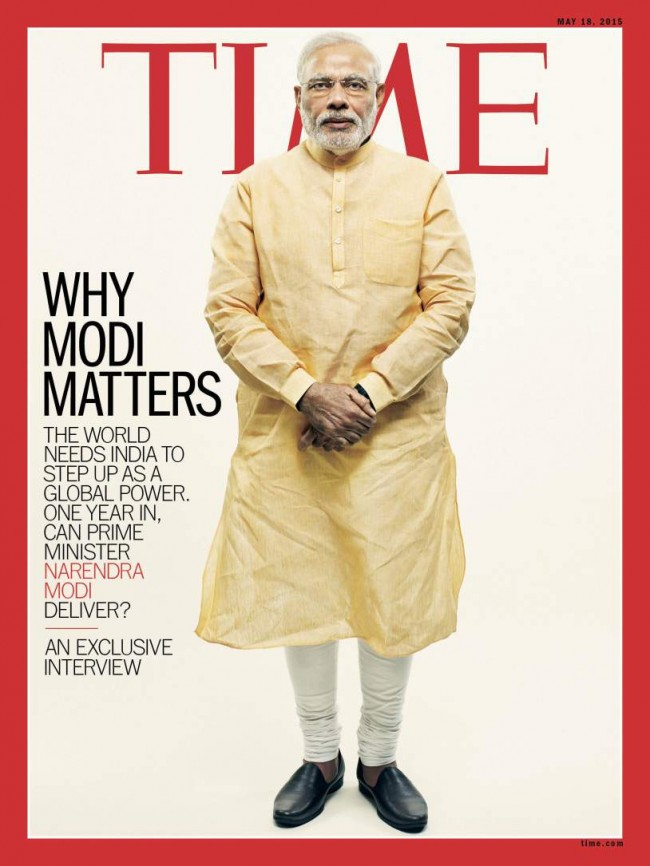 New York, May 7 (IANS) Prime Minister Narendra Modi has declared that his government views all religions at par and won’t tolerate any discrimination.

In an extensive interview to Time magazine, the prime minister said his and the BJP’s philosophy was “Sabka saath, sabka vikas – Together with all, progress for all.

“Wherever a (negative) view might have been expressed (about) a minority religion, we have immediately negated that,” he said in the two-hour interview.

“So far as the government is concerned, there is ­only one holy book, which is the constitution of India. The unity and the integrity of the country are the topmost priorities.

“All religions and all communities have the same rights, and it is my responsibility to ensure their complete and total protection,” the prime minister said.

“My government will not tolerate or accept any discrimination based on caste, creed and religion.”

“Government committed to freedom of speech”

On the BBC documentary “India’s Daughter”, which was banned from being telecast, he said the issue did not concern freedom of speech but was “more a legal issue”.

“It has two or three aspects. One aspect is that the identity of the rape victim should not be revealed which would have happened if this interview was allowed to be telecast.

“Two, the case is still sub judice and the telecast which features the interview of the person who is alleged to have committed the crime could have impacted the judicial process.

“Three, it is also our responsibility to ensure protection of the victim. If we had allowed such a thing to happen, in effect, we would have violated the dignity of the victim,” Modi said.

“So I do not think it is a question of freedom of speech, it is more a question of law and respecting the victim and the judicial processes in this particular case. In so far as freedom of speech is concerned, as I mentioned earlier, there is absolutely no issue. It is something that we greatly respect as an important aspect of our democratic values.”

There can be no good and bad terrorists, says Modi

In an oblique criticism of US policies, Modi has said the world must stop distinguishing terrorists between good and bad terrorists.

“We should not look at terrorism from the nameplates, which group they belong to, what is their geographical location, who are the victims,” Modi said in the interview to Time magazine.

“These individual groups or names will keep changing. Today you are looking at the Taliban or ISIS; tomorrow you might be looking at another name,” said Modi.

Elaborating, the Indian leader, in his interview on the occasion of his completing a year in power in India after a stupendous election win, said it was important not to analyze or look at terrorism from a purely political perspective but also view it from the perspective of the way it attacks human values, as a force against humanity.

“If you view terrorism in categories such as good terrorism and bad terrorism, that too can create its own challenges. Similarly, if you view Taliban as good Taliban or bad Taliban, that creates its own problems.”

Modi went on: “We should not look at these questions individually. We should address this problem in one voice, not in segmented voices something which diffuses the international focus when it comes to the problem of terrorism. I believe that this can be easily done.”

The prime minister also said that the UN’s Comprehensive Convention on International Terrorism should be approved.

“At least it will clearly establish whom you view as a terrorist and whom you don’t. We need to delink terrorism from religion to isolate terrorists who use this interchange of arguments between terrorism and religion.

“Several countries used to see terrorism as a law-and-order situation of individual countries. We should see it as something that is a fight for human values.”

He said what was needed was for countries that believe in human values to come together and fight terrorism.

“We should rather have a comprehensive look at the ideology of terrorism, see it as something that is a fight for human values, as terrorists are fighting against humanity.

Saying the names of terrorist groups will keep changing, he said: “Today you are looking at the Taliban or ISIS; tomorrow you might be looking at another name down the years.

“So it is important for the countries to go beyond the groups, beyond the individual names, beyond the geographical location they come from, beyond even looking at the victims of the terrorism, and fight terrorism as a unified force and as a collective.”

He said the UN Comprehensive Convention on International Terrorism had been with the United Nations for the last several years.

“I think that could be the first step for us to take. At least it will clearly establish who you view as terrorist and who you do not view as terrorist. The definitional aspects of terrorism will get addressed.”

Modi also made it clear that terrorism must be de-linked from religion, adding he had made the request to US President Barack Obama both in September last year and in January this year,

“If we are able to achieve this and if we go down this path, it would at least put an end to the emotional blackmailing which is inherent in this particular concept.

“It would also help us additionally to isolate the terrorists completely who tend to use this interchange of arguments between terrorism and religion.”

“I think it is something that, as I mentioned, the countries that believe in human values need to come together and fight as a collective and not looking at individual groups from the perspective of individual religions.”

“Poverty was my first inspiration”

Modi says poverty was the first inspiration in his life, triggering a commitment “to do something for the poor”.

Asked who had influenced him the most, Modi recalled his poverty-filled younger years in the interview to Time magazine.

“I was born in a very poor family. I used to sell tea in a railway coach as a child. My mother used to wash utensils and do lowly household work in the houses of others to earn a livelihood.

“I have seen poverty very closely. I have lived in poverty. As a child, my entire childhood was steeped in poverty. For me, poverty, in a way, was the first inspiration of my life, a commitment to do something for the poor,” said Modi, who became the prime minister in May last year.

“I decided that I would not live for myself but would live for others and work for them.

“My experience of growing up in poverty deeply impacted my childhood. Then, at the age of 12 or 13, I started reading the works of Swami Vivekananda.

“That gave me courage and a vision, it sharpened and deepened my sensitivities and gave me a new perspective and a direction in life.

“At the age of 15 or 16, I decided to dedicate myself to others and till date I am continuing to follow that decision,” he said.