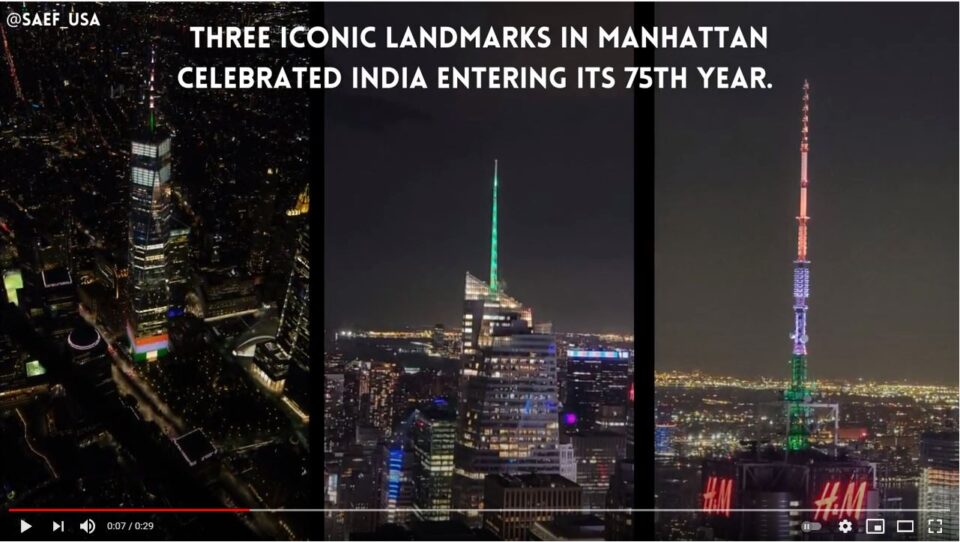 The iconic One World Trade Center, the tallest building in the US standing on the site of the 9/11 terror attacks, was lit up in the Indian flags tri colors to commemorate the 75th Independence Day on August 15.

This initiative commemorates the world’s largest democracy – India entering its 75th year of Independence. As part of the celebrations, other Durst installations at One Bryant Park and One Five One, in mid-town was also lit up in the tricolor.

“We are proud to partner with the South Asian Engagement Foundation as it celebrates India entering its 75th year of Independence,” said Mark Domino of The Durst Organization who oversees Spireworks.

The South Asian Engagement Foundation is responsible for many initiatives and civic engagements for the Indian American community as it assimilates into the fabric of Americana.

“This is an historic moment commemorating India’s Independence and most importantly the expression of love between the US and India,” said Rahul Walia, Founding trustee of SAEF. “We hope to continue the tradition and enhance the experience for everyone with more imagery on the podium,” he added.

The lighting turned on at sunset, New York City time, on August 15th on the spire of the iconic One World Trade Center, One Bryant Park and One Five One in mid-town and remained lit until 2:00 AM. Additionally, the Indian flag tricolor was visible on the podium of the World Trade Center.

“We are so happy to be working with the Durst Organization to help celebrate India and thank them for their help in making this a reality” said Aarti Walia, Director South Asian Engagement Foundation.

SAEF is also in talks to do a lavish Diwali expression in November to bring more awareness and exposure to the rich and diverse culture of the United States. They hope to make this an annual tradition going forward.