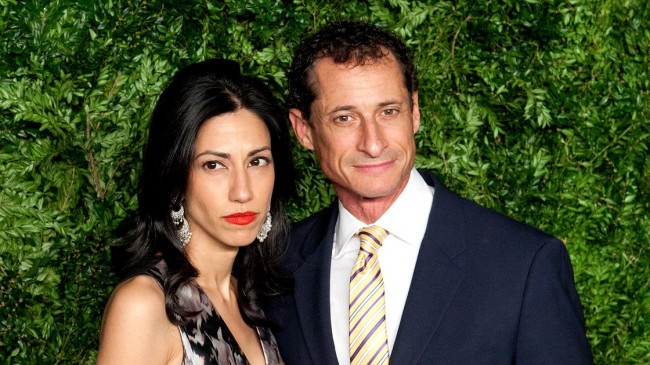 New York, May 20 (IANS) Former Secretary of State Hillary Clinton’s close aide Huma Abedin has filed for divorce from her husband and former Congressman Anthony Weiner after he pleaded guilty to a federal sex crime, the media reported.

The 40-year-old Abedin’s lawyers filed the papers, captioned “Anonymous vs. Anonymous”, in the Manhattan Supreme Court on Friday just hours after Wiener, 52, pleaded guilty in a federal court to a felony charge of transferring obscene material and admitted to sexting with a girl he knew was just 15-years-old, CBS New York News reported.

At the hearing, Weiner accepted responsibility for his conduct.

“I have a sickness, but I do not have an excuse,” CNN quoted Wiener as saying.

“I entered intensive treatment, found the courage to take a moral inventory of my defects, and began a programme of recovery and mental health treatment that I continue to follow every day.”

As part of the plea agreement, Weiner will register as a sex offender and will also have to forfeit his iPhone, surrender his passport and continue mental health treatment.

He is also barred from having any contact with the minor.

Weiner has not been charged but faces up to 10 years in prison,

However, under his plea deal, he is expected to get between 21 and 27 months.

Abedin, whose father is of Indian descent, married Wiener in 2010. A year into their marriage, Wiener admitted tweeting out an underwear selfie, according to the New York Post.

She stood at his side in 2013, at a press conference after Weiner self-scuttled his mayoral candidacy by getting caught continuing to sext with multiple women.

“I love him, I’ve forgiven him, I believe in him,” she said.

Last year, when Weiner got caught sending yet another underwear selfie, with their then-three-year-old Jordan asleep at his hip, Abedin had still refrained from divorce.