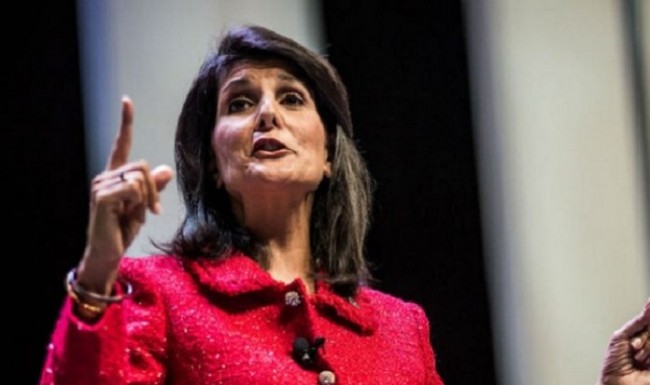 The resolution that was passed by a two-thirds majority on Thursday demanded Washington comply with Security Council decisions against changing the status of Jerusalem and declared US and Israeli action on the city “null and void”.

It, however, only expressed “deep regret at recent decisions concerning the status of Jerusalem”, stopping short of naming the US or condemning it outright.

An unusually large number — 35 countries — abstained, and 21 others were absent, showing that Trump’s threats had some effect.

US Permanent Representative Nikki Haley repeated Trump’s warning on aid before the vote describing support for it an “insult” to her country.

Palestinian Foreign Minister Riad al-Malki said that by voting for the resolution nations would be rejecting attempts at blackmail and intimidation.

He warned that Washington’s action could lead to a religious war that “has no boundaries” and only served the interests of extremists.

The Assembly resolution followed the US veto on Monday of a similar resolution in the Security Council introduced by Egypt. All the other 14 Council members voted for it, isolating the US.

Representing the OIC, Turkey’s Foreign Minister Mevlut Cavusoglu said that Jerusalem was the holy city of three monotheistic religions and its historic status had to be preserved.

Referring to the US’ threats to withhold aid, he said such “bullying” was unethical and votes were not for sale.

While the Assembly resolutions do not have the legal clout of the Council resolutions, they carry political clout, especially when endorsed by a two-thirds majority.

Previous Council resolutions have said that the status of Jerusalem and territories occupied by Israel after the 1967 war should not be altered unilaterally.

While close US allies like Britain, France and Japan, which had voted for the resolution in Council, again broke ranks with it in the Assembly, there were some surprises. Despite Prime Minister Justin Trudeau’s claims to follow a progressive foreign policy, Canada abstained.

Five of the countries that voted with the US and Israel were tiny Pacific island nations like Micronesia, and two were from Latin America. No country of any significance politically or in size voted for the resolution, even if some of them abstained or absented themselves.