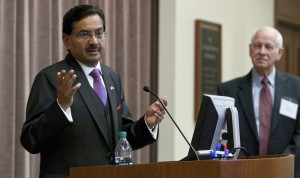 Atlanta, GA: Emory University’s 5th annual India Summit which took place on February 17 and 18 featured panels and keynote addresses by distinguished writers, scientists, scholars and diplomats, as well as representatives from leading industries. This year, the themes of the summit included innovation and entrepreneurship, law, religion and India as a secular state, international retail and business, literature and creativity and India’s growing influence in today’s world. 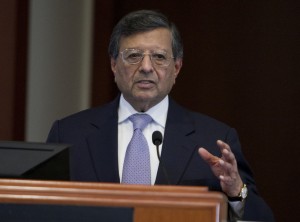 Prof. Jagdish Sheth, Charles H. Kellstadt Professor of Marketing, Goizueta Business School keynoted the first day’s luncheon. In his address on ‘Post-election India’, Dr Sheth said this is the first campaign he has seen where candidates are more visible than the party. He predicted losses for the Congress and said the country could, for the first time in years, have a party that controls both the executive and legislative branches of government.

The second day’s keynote luncheon speaker was Dr. William Foege, a renowned epidemiologist, who has worked on the successful campaign to eradicate smallpox in the 1970s. In an interview with Rollins School of Public Health Dean James Curran, Foege discussed the containment techniques he and his colleagues employed in India, and how the same methods used to eradicate smallpox can be used to combat diseases today. 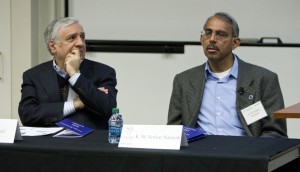 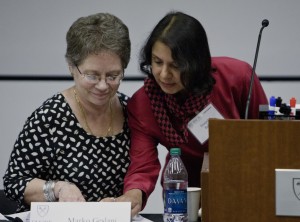 The two-day summit ended with a keynote address by Consul General of India in Atlanta, Ajit Kumar on the topic, ‘India-US Relations’. In his address, the Consul General spoke about the large strides in development that India has taken in the past 65 years.

“One of the major achievements of independent India has been its evolution as the world’s largest democracy. Our democracy is vibrant and sometimes noisy. Today, we are a nation of more than a billion people where principles of democracy and rule of law are firmly rooted.  There is no precedent in the history of governing a democracy of over a billion people.  Moreover, India’s pluralism and its ability to manage it could be a big lesson for others.”

He said the last decade has witnessed the emergence of India as one of the fastest growing economies in the world. “We are today the third largest economy in the world on purchasing power parity basis.  Our GDP growth in the last decade has been around 7.9%.  While impacted by the global slow down, our GDP growth has come down to 5% but according to the World Bank, it will again increase to 6.0 to 7% in the year onwards.”

The Consul General said India’s biggest strengths and enormous source of dynamism for years to come, is its young population, 50% of which, is under the age of 25.

India’s large and expanding middle class of nearly 300 million not only provides the skilled manpower for a wide range of scientific, technological and managerial fields, but also provides a huge consumer market which is emerging as one of the world’s largest, he said.

“We are already a major IT power, thanks to the mathematical and analytical skills of young Indians, who have also made the presence felt in advanced countries especially in America – also in Silicon Valley and also in Georgia,” he added.

The Consul General also touched upon India’s telecom revolution with over 900 million mobile phone users, its major achievements in the health sector including the eradication of polio, and its massive movie industry, which produces the maximum number of movies in the world.

He spoke at length about the upcoming general elections in India, the largest humanity managed exercise –with 800 million voters, who will cast their votes at over 800,000 polling booths using 1.18 million electronic voting machines made in India.

“Regardless of the outcome of the next elections, they will once again demonstrate to the world the strength of our democracy and our institutions, and the enduring nature of these ideals,” he said.

On the India-US bilateral relations, he said, President Obama had characterized the relationship as one of the defining partnerships of the 21st Century. “The bilateral cooperation is now broad-based and multi-sectoral. People to people interaction provide further vitality and strength to a relationship, which enjoys bipartisan support in both our countries,” he said.

He quoted India’s Ambassador to the US, S. Jaishankar  as saying that “Politically, there is no question that our comfort levels are higher than they have ever been before.  From the highest levels of the Government to the legislature and bureaucracy, we see a frequency, intensity and candor of contacts that speak for themselves. We are now talking defense cooperation, counter-terrorism and homeland security with as much ease as we are energy, education or health.”

He said not enough credit has been given to the investments that Indian companies have made here since 2008. A recent study of 68 Indian companies has revealed that their collective investments in the US exceed $ 17 billion. One third of them are actively engaged in R&D here, spending about $ 350 million in that respect (Novelis, Georgia).

The Consul General also spoke warmly about the more than three million strong Indian American community which has been increasing its sphere of influence and gaining in economic and political strength including as governors, in the Congress, in state legislatures, in the federal administration and in the corporate world with CEOs like Indira Nooyi of Pepsi and Satya Nedella of Microsoft.

“The India-US relationship has arrived – as some would say. Therefore, the grand strategy underwriting our ties is fundamentally sound,” he said. “It is essential that we continue to invest in our engagement at all levels because India-US partnership is really in our respective national interests.”