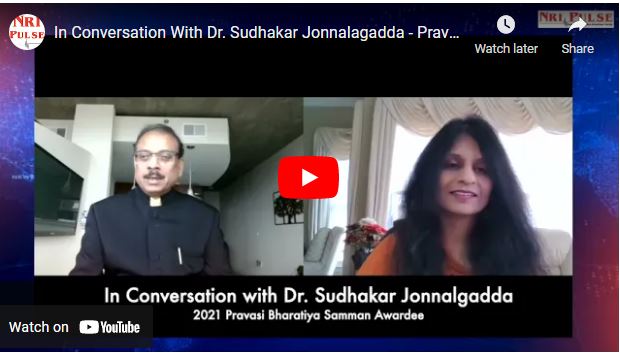 Atlanta, GA, December 15, 2021: “In recognizing me, the government of India has recognized every physician around the globe for their contributions to AAPI and sacrifices during Covid,” Dr. Sudhakar Jonnalagadda said in his exclusive with NRI Pulse. Dr. Sudhakar Jonnalagadda, President of the American Association of Physicians of Indian Origin (AAPI), in 2021 was conferred the Pravasi Bharatiya Samman Award (PBSA) during the 16th edition of the annual Pravasi Bharatiya Divas (PBD) Convention, held virtually on January 9th, 2021. Consul General of India, Atlanta Dr. Swati Kulkarni also felicitated Dr. Jonnalagadda with presentation of his award in a formal ceremony on December 1, 2021.

The Pravasi Bharatiya Samman Awards were conferred by the Hon’ble President at the PBD Convention in the valedictory session of the Pravasi Bharatiya Divas celebrations. Dr. Jonnalagadda was chosen for the prestigious award by the government of India in the field of medicine and for his great leadership of AAPI, the largest Indian medical organization in the US, particularly during the pandemic.

AAPI is the second largest Medical Organization in the United States, representing the interests of the over 100,000 physicians and Fellows of Indian origin in the United States, serving the interests of the Indian American physicians in the US and in many ways contributing to the shaping of the healthcare delivery in the US since its inception in 1982.

A Board-Certified Gastroenterologist/Transplant Hepatologist, working in Douglas, GA, Dr. Jonnalagadda is a former Assistant Professor at the Medical College of Georgia. He was the President of Coffee Regional Medical Staff 2018 and had served as the Director of Medical Association of Georgia Board from 2016 onwards. He had served as the President of Georgia Association of Physicians of Indian Heritage (GAPI) 2007-2008 and was the past chair of the Board of trustees, GAPI. He was the chairman of the Medical Association of Georgia, and was a Graduate, Georgia Physicians Leadership Academy (advocacy training). He assumed office as the 37th President of the AAPI in July of 2020.

When the disastrous second wave hit India and medical systems were overwhelmed, AAPI, under the leadership of Jonnalagadda jumped into action. “I just wrote a simple letter to all our members and supporters and the response and within three months we were able to send significant help to India through various organizations including Sewa International and Red Cross,” he noted. Thus far, AAPI has provided 3,200 concentrators, 100 ventilators and 100 high flow nasal canula machines to 45 hospitals in India as part of the Covid pandemic relief efforts. AAPI planned and collaborated with several agencies and Government of India to ensure that help reached the much-needed care and supplies to areas that needed it most. Jonnalgadda noted. “When I got a call from a physician that 25 patients have died (because the oxygen plant had caught fire ) and they all died because of lack of oxygen, I immediately asked Sewa to deliver the supplies to Goa, and they did,” he noted. “Sewa International did a wonderful and very efficient job,” he said commending their efforts. Dr. Jonnalgadda’s team researched areas of need and shipped supplies. Google, in partnership with India’s Ministry of Health and Family Welfare, launched a search tool to locate testing centers, hospital resources and vaccination sites around the country.

“We created tele consultation, using three platforms which is very significant for both physicians to consult and for patients in rural areas,” Dr. Jonnalgadda noted, adding that Dr. Sreeni Gangasani contributed immensely towards the efforts. With physicians in the east and west coast attending calls around the clock, the idea Dr. Jonnalagadda said was to keep patients with mild symptoms out of the ER and identify those who need to go to the hospital sooner. Owing to various protocols and licensing issues across countries, physicians cannot treat or prescribe medicine internationally, he noted.

Amongst others, he said nurse appreciation initiative across various countries including New Zealand Australia. the Caribbean particularly St Lucia and India, was a huge success that was a small gesture that went a long way in highlighting their contributions. Dr. Jonnalgadda also brought focus to Medical Journal JAPI released through AAPI last year. Speaking of other AAPI initiatives, he added that AAPI has formed a strategic partnership with Community Pure Water Foundation (CPW)  to provide clean drinking water to millions of people in rural India.

How does Dr. Jonnalagadda compare medical systems in the US and India? While he notes that both countries provide care on par with the latest technology and knowledge, nurse training in India he thinks has room for improvement.

Originally from Andhra Pradesh, Dr. Jonnalagadda was born into a family of physicians. His father was a professor at a medical college in India and his mother was a teacher. He and his siblings aspired to be physicians and dedicate their lives for the greater good of humanity. “I am committed to serving the community and help the needy. That gives me the greatest satisfaction in life,” he said.

“To this day, what gives me most satisfaction is when I go home and think about a patient that I was able to help. You must love and care for the patient. If you cannot do that, don’t take up this profession. Don’t get into the medical field just for money. It will come. Be honest to yourself to communicate to the patient, and the family,” is Dr. Jonnalagadda’s advise to aspiring and upcoming medical students.