Atlanta, GA: Spoorthy Bharadwaj won the IACA Miss Georgia title while Aarya Ramprasad was crowned Teen winner at this year’s IACA Beauty Pageant held at the Ferst Center on July 25. The event was a rocking success to say the least. From the breathtaking stage with Egyptian decor to the amazing contestants, beauty was unveiled.

Amartya Chander and Ameya Chander began the event by singing the National Anthem of India and theUnited States. Singer Darshana Menon started the show with classic Bollywood songs. Darshana has been pleased to make an appearance at every IACA beauty pageant for the last three years. As emcees  Anjali Tripathi and Monty Kataria officially kicked off the show. The audience was on the edge of their seats. All 18 contestants took the stage with the opening dance choreographed by Shiv’sInstituteofDance.

As the night progressed through rounds of the pageant, the contestants grew nervous and the audience grew eager to see who was going to take home the crown. There were amazing talents from Spanish ballads that would make you crave Mexican food and a bhangra dance that made you want to move in your seat! The contestants continued to unveil the beauty in their brains with the question answer round. This round tested what each contestant had on the inside and allowed them to express what they could offer in today’s society. All of the contestants had gracious answers. 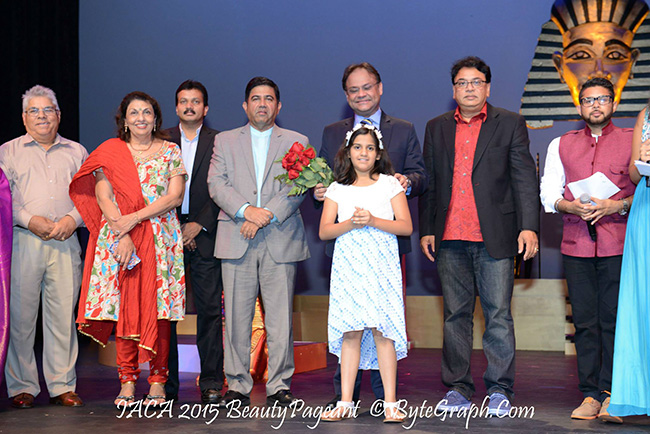 As the judges made their decision, the crowd was amazed and kept asking for more! The panel of judges were in a true predicament as all of the contestants had enough beauty to take the crown.

”IACA was proud to host the Beauty Pageant this year and hopes to see even more contestants and an even bigger audience next year,” the pageant coordinators told NRI Pulse. “We would also like to thank our sponsors and especially the title sponsors: Dr. Pran Sood and Karan Pasham Reddy of EIS Technologies.”