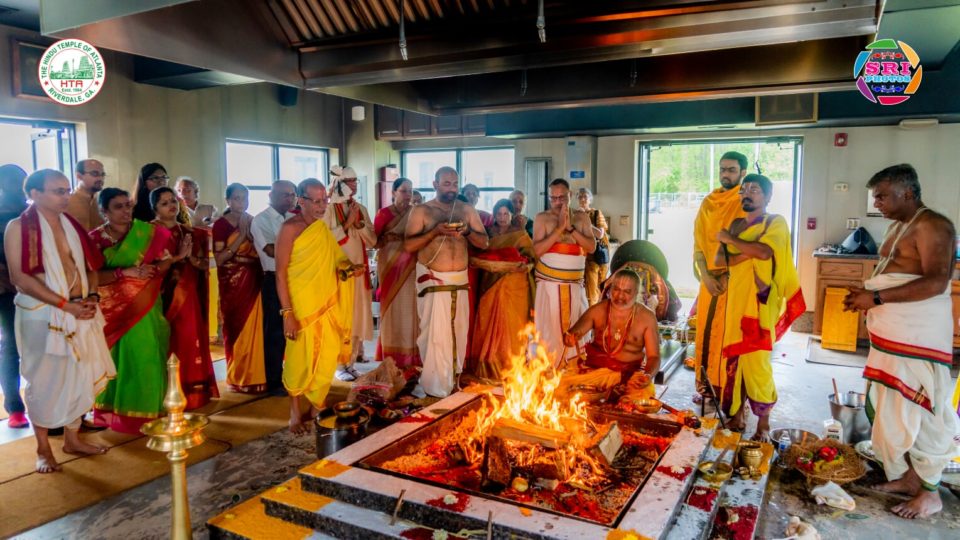 Atlanta, GA, May 10, 2019: No sooner the invitations announcing the Vivah Mahotsavam of Lord Rama and Sita Devi were received by the devotees, they waited in eager anticipation of the auspicious Sri Rama Navami Day on Saturday, April 13, 2019, to participate in the spectacular royal wedding. More than 2000 devotees were in the Hindu Temple of Atlanta, Riverdale to participate in this joyous celebration.

Ramayana and Mahabharata are two of the largest epics in world literature. The Hindu epic of Ramayana depicts the duties of relationships portraying ideal characters like ideal King, father, husband, wife, brother, servant etc. Lord Rama was the legendary prince of the Kosala kingdom.

Lord Ram and Sita Devi are among the most popular deities worshipped in the Hindu religion. They are the ideal husband and wife.

A huge canopy was set up in the forecourt of Shiva Temple and festooned with colored lights and pennants. Under the canopy, many dedicated and enthusiastic volunteers, and temple priests had worked for long hours over many weeks to set up the stage (mandap). On the stage, the centerpiece was an artistically decorated swing which was used for the celebrations later.

In addition to the Hindu Temple’s eleven priests, ten other priests meticulously conducted all the elaborate rituals, chanting shlokas, and mantras and blessing the devotees.Balaji Temple and Siva Temples were overflowing with devotees offering their prayers during Suprabhatam ceremony.

Balaji  and Sita Rama Abhishekam in Balaji Temple was followed with Sri  Rama Taraka homam in the Yagasala.The devotees then recited the Hanuman Chalisa for the first time, under the canopy. The joyous erdukolu (welcome) ritual depicts the relatives of the bride and bridegroom meeting each other and then welcoming the bridegroom for the wedding. Sita Devi’s kumkum mehndi and haldi ceremony under the canopy was a spectacle for all to watch.

After harathi, all relished the Mahaprasadam. Some of the priests and volunteers enthusiastically prepared the three pallakis for Sita Devi, Lord Rama and for Lord Hanumana and Lord Lakshmana respectively. The ladies in colorful saris and other fetching Indian apparel marched in front carrying flower petals and fruit offerings while the air reverberated with the festive strains of nadaswaram and thavil. The volunteers and more energetic ones also joined in the colorful procession, dancing and chanting, as the palanquins reached the canopy. Lord Rama, SitaDevi, Lord Lakshmana and Lord Anjaneya were ceremoniously seated on the swing and gently rocked by the priests during the Sita and Rama’s wedding rituals.Sri Rama Pattabhishekam of Lord Rama as King of Ayodhya, after returning from 14 years of exile, was celebrated with great joy. Devotees lined up to go on stage and offer their prayers and have prasadam while others were regaled with classical keerthanas by Swati Karri group and captivating dance by Jyothi Chintalapudi.

All the devotees relished the sumptuous vindu bhojanam at the conclusion of the celebrations.

HTA President Sheela Lingam was effusive in expressing gratitude to the devotees. “I am deeply thankful to Prashant Kollipara of ByteGraph, Vaisheshi Jalajam, Nanda Chatla more than a hundred volunteers and their families for the compelling stage, swing and palanquins decorations, to food committee chair Tulasi Vanapalli and the kitchen staff for preparing delicious Mahaprasadam for all the devotees,” she said.

“Traffic control as usual was efficiently handled by Madhav Kasam and his friends, Photography by Suresh Volam & Media coverage by Mahadev Desai. The executive committee and management of HTA is deeply appreciative of all volunteers, Pooja committee chair Padma Koganti along with the temple priests who performed all the rituals, poojas and deity’s decorations, all the devotees for their participation, sponsorships and generous donations. I also want to thank all the office staff for ensuring a memorable and joyous celebration.”