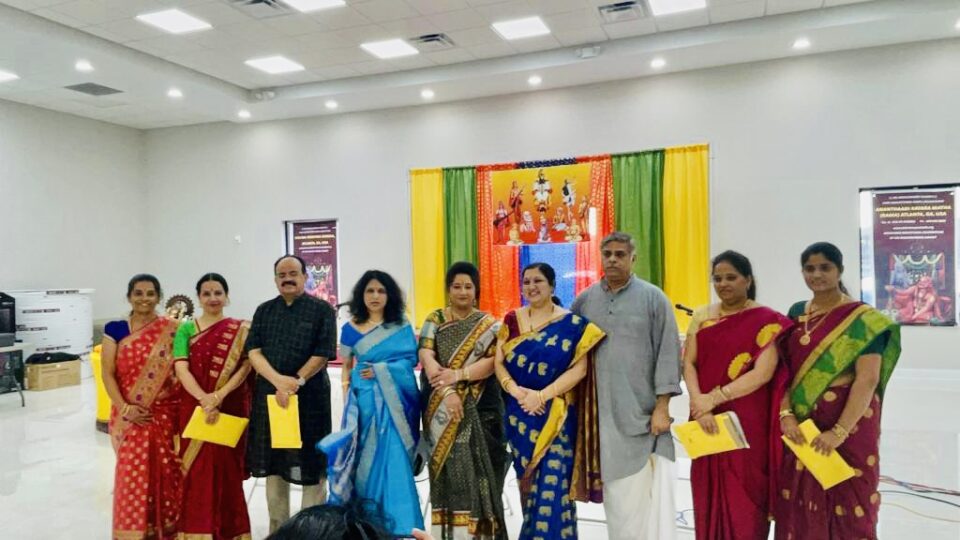 Atlanta, GA, December 2, 2022: “Dasavani is very much relevant to our times. Just as food is required for the body to give strength, Dasavani is essential for nurturing good thoughts which provide great strength for the mind body and soul. It guides people in becoming better human beings, irrespective of religion,” Shri Puttur Narasimha Nayak, a popular Carnatic and Dasa composition singer told NRI Pulse during his Atlanta visit. Shri. Nayak presided as the guest of honor at the Daasara Aaradhane event, hosted by Ananthaadi Rayara Matha, Atlanta (RAMA) on November 6,2022 at the Gadhpurdham Hall in Norcross.

Shri. Nayak, on his ‘Dasavani’ tour across the US, mesmerized the audience with divine renditions of Dasara Padagalu, elaborating on the message and meaning of the lyrics. He also served as a Judge for a singing competition held earlier as part of Vidya Vaaridhi competition held by RAMA to showcase talent in varied areas of arts and literature.

Dedicated to Dasa Sahitya, the literature of bhakti movement composed by devotees in honor of Lord Vishnu or one of his Avatars, the all-day event featured classical dance and singing performances originally composed by the Haridasas, from various local talent with traditional Karnataka food cooked at the venue.

“The best part of Atlanta visit to me is the love and affection showered on us by each and every person we met during this short visit,” Shri. Nayak said. Offering a more profound explanation to the popular ‘Bagyada Lakshmi Baramma, which is generally presumed to invite Lakshmi or money into a home, Shri. Nayak said it also means that we are trying to move toward divinity by invoking Lakshmi we also invoke Vishnu, who follows her.

RAMA Competitions had judges and participants from both the US and India.

Puttur Narasimha Nayak is a Kannada and Konkani singer and vocalist from Karnataka.  He sings devotional songs, chiefly Haridasa compositions, and Carnatic classical music. He has won the award for Best Male Playback Singer at the Karnataka State Film Awards in 1992.  He was awarded the Sri Raghavendra award in 2005. He has sung more than ten thousand devotional, motion picture, and folk songs in 14 Indian languages and toured the US and Bahrain several times and served as a representative in the Kannada conferences abroad.

Haridasas (“servants of Lord Hari”) were preachers of bhakti to Lord Vishnu or one of his avatars. The bhakti literature of these Haridasas is collectively referred to as Dasa Sahitya. It is in the Kannada language. Haridasa movement traces its origin to the Dwaitha philosophy of Madhwacharya (1238-1317). Dasas are Dwaitha scholars and poets. Over a span of nearly six centuries, between the thirteen century and fourteenth century C.E., Haridasa saints and mystics impacted the culture, philosophy, music, and art of Karnataka and the rest of South India. The main compositions of the Haridasas are in the form of kirtanas (padas or devaranamas.), songs, ugabhogas, non-metrical short pieces, and suladis, compositions set to seven different talas, traditional metrical patterns.  These compositions give precedence to sentiment over melody.

Though Madhwacharya wrote several works, all of them were in Sanskrit. Many saints who came after Madhwacharya tried to simplify his teachings and also wrote in the language known to the common man. Naharahi Theertha, one of his direct disciples composed many early devotional hymns in praise of Vishnu. He is also believed to be the pioneer of the Yakshagana system in Karnataka and the Kathakali dance form in Kerala.

While the Srikurmam inscription indicates that Naraharitirtha may have been the originator of the devotional movement, the songs of the Haridasas’ give credit to Sripadaraya as the real founder of the movement in the fifteenth century. This seer was the first to write or compose songs in Kannada. His song Baroo Namma Manege caught the imagination of the people. Soon, Dasas realised the importance of composing songs and singing them in Kannada.

A disciple of Sripadaraja, Vyasa Theertha, was a major influence on the Bhakti movement and Dwaitha tradition in South India. Vyasa Theertha entered Brindavana on 1539 at Nava Brindavana in Hampi. He was a friend and guide to Purandara dasa, Kanaka Dasa and perhaps even to Vaikunta Dasa.

The study of the Haridasa tradition demonstrates ways in which a devotional movement became part and parcel of the daily routine of the common folk. Everyday activities described in the padas such as Mother Yashoda waking up, bathing, adorning, feeding, and playing with the child Krishna, elevate the mundane to the level of the divine. Several passages, proverbs, idioms, and expressions of the Haridasa kirtanas have found their way into the Kannada diction and can be heard in routine conversations of even the illiterate. Without any awareness of literature or its authors, folks recall lines and use them as guidelines to live life by. Its ultimate greatness then, is the fact that this literary tradition appeals to the connoisseurs and the commoners alike.