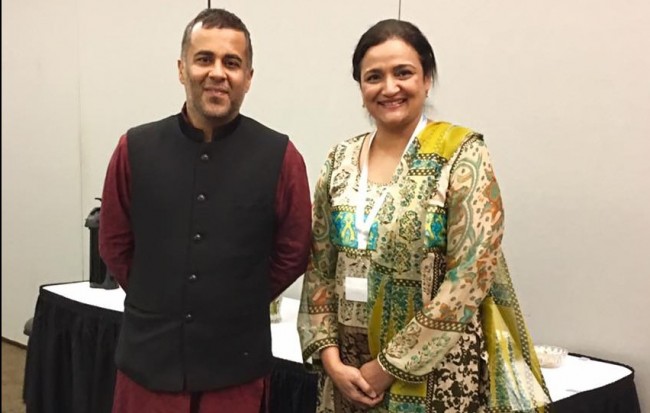 BY VEENA RAO
Chetan Bhagat, the bestselling author of ten blockbuster books that have sold millions of copies across India, says his incredible success is the outcome of exceptional luck, being at the right place at the right time and his innate ability to connect with the masses.
Speaking to NRI Pulse on the sidelines of the Heart Notes event where he was the keynote speaker, Bhagat said his goals to write have evolved over the years.
“Now, I write to create change,” he said.
Change seems to the catchphrase for the writer who recently signed a mega deal with Amazon Publishing for six-books. Rupa has published all of Bhagat’s nine books since his debut with ‘Five Point Something’ in 2004.
The first book with Amazon will be released this October.
“There is not much change in the content of the book,” he insists. “I have changed my publisher, because Amazon is coming to India in a big way. I needed the distribution they have in tier-2 cities as well as in international markets. I want to go deep into the interiors of India.”
And although most of his novels have been about young middle-class aspirations and concerns, and have targeted readers in small town India, he is now open to writing a novel set abroad.
“I am a better writer now,” he says of his 14-year journey in the literary world, and this confidence probably explains why he is working on a thriller, a shift from the romantic novels and movies he is known for.
India is witnessing a boom in English language literature. Indians are reading books like never before. What does he think of the many new authors who are making a name for themselves in the literary scene?
“So many new voices are coming out. Different kinds of books are being published- mythology, thrillers, love stories. I just want books to be out- for people to read and writers to write,” he said.
Even successful authors can have regrets. What are his?
“Who doesn’t have regrets? But not the kind that keep me up at night. I wish I had started writing earlier, listened to more music, learned to dance.”
“If I had known I was going to be a writer, I would have read more growing up,” he added.
previous post

John Masters and his 'Savage' view of Indian history