“The world is headed towards spirituality and compassion,” said host Dr Nandi, setting the mood for the evening. A Heartfulness practitioner, Dr Nandi incorporates compassion, a sense of community, purpose and spirituality into his medical TV show, Ask Dr. Nandi, which is aired over seven networks.

Keynote speaker Bhagat, who began with the disclaimer that he was not a spiritual master, nonetheless connected well with the audience as he shared gleanings- often with wit and humor- from his literary and Bollywood journey.

All over the world, people seek happiness, he said. To him, the elusive state is “when the mind, body and heart are in sync”.

“When I was at Goldman Sachs, people said I must be happy. But I wasn’t as happy until I started writing, which changed the course of my life,” he said. “We all have an inner voice that tells whether we are happy or not.”

That inner voice, he said, could be a positive or negative force. A negative force could be destructive to the self and to others- driving people to suicide or murder. “A positive voice can be acquired through stillness. One way to do that is through theHeartfulness Way.”

“If you have a spiritual component, it is liking having an ocean inside you,” he added, elaborating with the analogy of throwing a stone at the puddle versus the ocean. Earlier, a bad review would leave him feeling horrible for days, but he was now unaffected because he had started cultivating the ocean inside him.

The bestselling author said the stresses of modern day living- anxiety, stress, judgements, expectations, disappointments can kill happiness, despite the comfort of gadgets. “You need to do something to offset all this. That is where Heartfulness comes in.”

“I want to write, make movies, do talk shows, be a great father and husband and son-in-law. But ultimately, it is about having clarity of mind and connecting with myself,” he said, adding that being calm and happy is a job requirement for him, for only then would story ideas blossom.

Elaborating with insights into the worlds of the rich and famous, he talked about celebrities admitting to depression. “They get addicted to celebrityhood. One day, someone says something nasty, or their film doesn’t run, or they gain a bit of weight. They are not in touch with themselves. They are flowing from one paparazzi place to the other. That is dangerous (way to live).”

Bhagat also talked about finding a new challenge, a mission in order to stay excited and motivated in life. “It doesn’t have to be a work-related challenge. It can be a relationship with the family or a more spiritual path.”

“Be so busy improving yourself that you have no time to criticize others,” he concluded.

A pertinent question in the Q&A related to children being taken apart from their parents, and brutal crimes committed against them. “Is there still hope in such a world? Can we still live in a heartful, loving way,” asked Bhagat.

As long as there is a heart, there is hope, Pollock responded, while acknowledging that we now live in a time where people identify themselves not just as their bodies, but as their community, country and beliefs. “So, when somebody insults something I believe in, I take it personally. The problem is the ego.”

The solution, he said, is to find the true, most essential, highest part of ourselves. “If we meditate, we do have a chance of finding that.”

At the end of the Q&A session, Pollock guided the packed audience to a 15-minute meditation session. 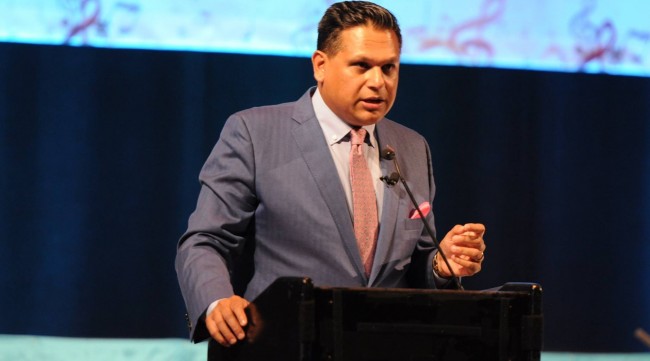 The highlight of the evening was the always deeply moving vocal concert by Padma Vibhushan Pandit Jasraj, who, at 88 years, has the same magnetic voice that has made him the living legend of Hindustani classical music. The audience was blessed as Pandit ji wove magnificence into every note of the Shiv-Stuti, ‘Chidananda roopah Shivoham Shivoham’ and ‘Har Har Har Bhootnath’ in Raag Darbari Kanada.

Subramanyam earlier mesmerized the audience with a solo recital.

By the time the event ended, the Heartfulness Institute’s message of spiritual transformation was almost palpable. “One of the best local events in recent times,” a fellow journalist sighed on her way out. This writer couldn’t agree more.

Heartfulness Institute is a global nonprofit organization with thousands of volunteer trainers who serve more than a million meditators in over 130 countries. Its mission is to help develop peaceful, healthy and holistically educated individuals and children, families and communities, organizations and businesses, and government organizations, with a spirit of human well-being and oneness.

Heartfulness relaxation and meditation techniques are studied and proven to be effective in reducing stress and anxiety, improving sleep, enhancing emotional intelligence and exploring the heights and depths of human consciousness.

[…] to NRI Pulse on the sidelines of the Heart Notes event where he was the keynote speaker, Bhagat said his goals to write have evolved over the […]