BY VEENA RAO
Photos by Vinod Devlia, Photography by Vinod

Atlanta, GA, July 9, 2018: Megastar Salman Khan was back in the city after twelve long years, and his roar superseded his arrival, pulling in frenzied fans from all around the Southeast to a sold-out show at the Infinite Energy Center on June 22.

The true stars, however, were those who worked behind the scenes to put together a glitzy extravaganza with world class production values- technically advanced equipment, audio-visuals and pyrotechnics- and dreamed of bringing the tour to North America.

The five friends who make up Prosperous Entertainment- Anil Damani, Ameen Popatiya, Salmaan Ajani, Faruq Patel and Altaf Popatiya, and A. R. Paracha of Paracha Entertainment deserve applause for their gumption in launching the US tour in Atlanta (The team also presented the concert in Los Angeles and New Jersey) and raising the profile of the city as a top concert venue.

The show was scripted, directed and managed by Sohail Khan Entertainment and JA events, and presented in the US by Sahil Promotions and Zee TV.

Salman had a mega entry to the stage when the mega screen that charted his 30-year Bollywood journey slid open, and he walked in to a raging welcome from the over 11,000 strong audience. The superstar danced to a medley of his chart-busting songs- from Maine Pyar Kiya to Race 3, showing off his quirky ‘jag ghoomeya’ step several times- spinning on the floor, then bringing one foot over the other knee. In the second half of his act- he grooved with his leading ladies to chart-busting songs with them, and delighted his fans when he sang with considerable finesse.

However, he fell short of engaging with his fans, and looked awkward in the brief segment where three ladies picked from the audience by Maniesh Paul were asked to dance with him to his hit from ‘Maine Pyar Kiya’ (the ladies had the time of their lives).

In fact, the engaging bit was left almost entirely to Paul, who shouldered the responsibility with quick wit, bringing the house down with humor that often poked fun at the Gujaratis in the audience.

The leading ladies- Katrina, Jacqueline, Sonakshi and Daisy- had fun putting their best foot forward and looked gorgeous in their elaborate costumes while exuding girl power. Katrina and Jacqueline had the most dramatic entries – Katrina’s was on a platform that moved high above the audience, while Jacqueline arrived on stage on an elevated platform that moved in the middle aisle. Sonakshi had a special surprise for her fans, rapping her own version of Yo Yo Honey Singh’s ‘Love Dose’.

India’s Michael Jackson, Prabhu Deva, did what he is best known for. He showcased his gravity defying moves set to his Tamil, Telugu and Hindi hits from over the years.

Singer Guru Randhawa, who made his Bollywood debut with Hindi Medium, swayed the audience with his Punjabi hits, proving once again that music and talent transcend language barriers.

The glitzy evening ended on a high note well past midnight with all the stars taking the stage to dance to “Allah Duhai Hai” (Race 3).

The Da-Bangg Reloaded stars’ engagements in Atlanta included a national press conference and meet and greet that drew fans from all over the US to the Westin Atlanta Perimeter on Thursday afternoon. Salman was in his element at these events, interacting with humor and warmth, inviting his fans and their children and their children to the concert.

Salman and Daisy also engaged with fans at the Opera nightclub that night. 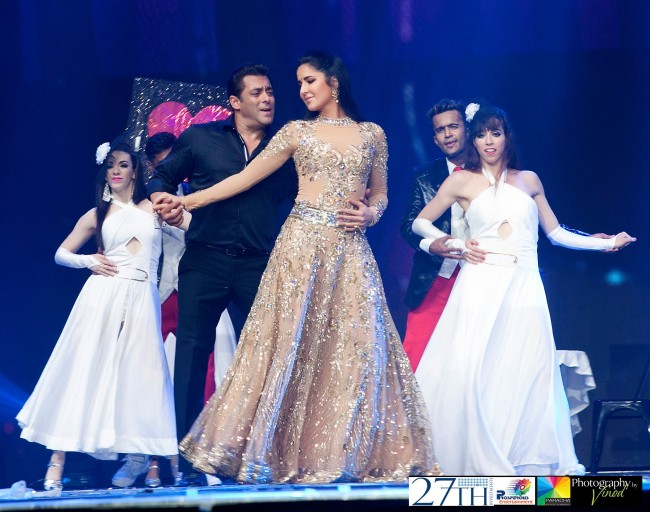