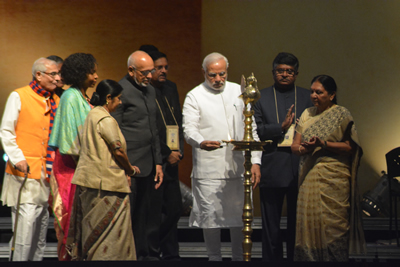 Atlanta, GA: Pravasi Bharatiya Divas (PBD) isIndia’s flagship event, which has been held annually since 2003.It is world’s largest annual gathering of people of Indian origin. It is celebrated on 9th January every year to mark Overseas Indian community’s contribution of knowledge, expertise and skills in the development ofIndia. These conventions are also very useful in networking among the overseas Indian community residing in various parts of the world and enable them to share their experiences in various fields. During the event, individuals of exceptional merit are honored with the prestigious Pravasi Bharatiya Samman Award to appreciate their role inIndia’s growth. The event also provides a forum for discussing key issues concerning the 25 million Indian Diaspora.

The historic and memorable 13th Pravasi Bharatiya Divas this year had an added significance in that it was held in Gujarat for the first time and it marked “100 years of the return of the greatest ‘Pravasi Bharatiya’, Mahatma Gandhi, who arrived back inIndia fromSouth Africa on January 9, 1914.” The 3 days event from January 7 to 9, was held at Mahatma Mandir, Gandhinagar,Gujarat. 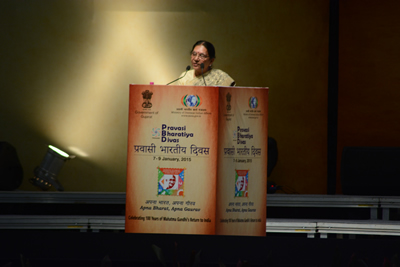 The 13th edition of the PBD was graced by the Chief Guest, Guyanese President Donald Ramotar, the Guest of honor, South African Foreign Minister Maite Nkoana-Mashabane, Mauritius Vice Prime Minister Showkutally Soodhun; national and international dignitaries, and high-ranking officials together with over 4,000 delegates from 58 countries across the globe.

The Indian Prime Minister, Narendra Modi inaugurated the 13th edition of the PBD. The Gujarat Chief Minister, Anandiben Patel also joined in at the inauguration ceremony. In his rousing address Modi informed that PIO and OCI Cards have been merged as per his recent promise; and visa-on-arrival facility extended to a number of countries. He exhorted the diaspora to help in rejuvenation of river Ganga. He also shared with pride that on September 27, 2014, United Nations had declared 21st June as ‘International Day of Yoga’. 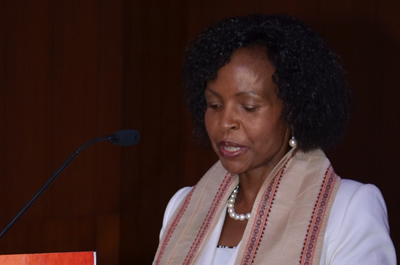 Prior to this, Shri. Modi inaugurated Dandi Kutir Museum, located in a 41 meter salt mound (as a symbol of his famous Dandi March). The museum in Gandhinagar is dedicated to the inspiring life and works of Gandhi ji.

Coins and Stamps to commemorate the centenary year of his return toIndiafromSouth Africawere also released.

On Wednesday, 7th January,Hon.Min.for External Affairs and Overseas Indian Affairs, Government of India, Sushma Swaraj delivered the inauguration address exhorting the Indian youth diaspora to ‘connect, celebrate and contribute’ to the transformational change being witnessed in India in the making of “Ek Bharat,Shreshth Bharat’.” The Indian youth diaspora can become ambassadors of the ‘new’India as “you have retained a bit ofIndia in your heart and each one of you have a bit of ‘Bharat’ in you.” She appealed to the youth to connect with the young generation of Indians-over 50% of the Indian people were under 25 years. The first plenary session was Bharat ko jano.Youth PBD was an occasion to celebrate India’s traditions, art and culture, even as the country strives to empower its youth with technology. The second plenary session was Bharat ko mano. She said the diaspora could contribute significantly to the development of India through programs such as The Jan Dhan Yojana;The Swachh Bharat campaign for cleanliness; ‘Make in India’; ‘Digital India ‘initiative; creation of smart cities and other physical infrastructure programs. 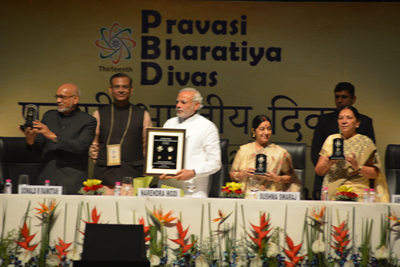 Maite Nkoana-Mashabane, said that Gandhi ji’s return toIndiacemented an unshakable bond between the people of India and South Africa who were fighting against similar problems of gender discrimination, racial disparity and oppression of women.

Referring to youth as the present and the future of any country, she added that young must have a sense of their responsibility. The concept of peaceful protests, also known as ‘passive resistance’ is Gandhi’s real legacy for the youth to follow.

Guyanese President Ramotar said that he would like to see India be the voice of the developing world. To that end,Guyanawould supportIndia’s bid to be a permanent member of the UN Security Council. What Shri Modi has done in progress and development  of  Gujarat needs to be replicated in other States inIndiaalso.

During the plenary session on ‘Investment opportunities in States’ Smt.Anandiben Patel shared her vision of five mantras to makeGujarata smart State. : (i)Smart schemes for welfare;(ii)Smart economy;(III)Smart governance;(iv)Smart energy and (v)Smart human resources .She gave details of various schemes and particulars of investment opportunities, and assured the diaspora of Gujarat’s full support.

The PBD Oration on Relevance of Gandhian Philosophy over the Century was delivered here today by Prof. Arvind Sharma, Birks Professor of Comparative Religion,McGillUniversity, Canada.In his insightful speech,Prof.Sharma noted that Gandhi’s positive secularism teaches tolerance towards other religions

Chief Ministers of as many as 9 States made a strong pitch for investments by overseas Indians as they presented the opportunities and facilities in their respective States.

13th PBD closed with a call to strengthen links between young Pravasis and Indian youth. The Vice President of India Mr.M Hamid Ansari noted,  “What then is the challenge before us in this task of linkingIndiamore closely with its overseas community? In my view it is to maintain and strengthen the linkages between the next generation of Pravasis and their counterparts inIndia. It is essential that the new generations at both ends continue and strengthen this mutually beneficial bond. The Youth Pravasi Bharatiya Divas organized on the 7th of January is a good step in the right direction.”