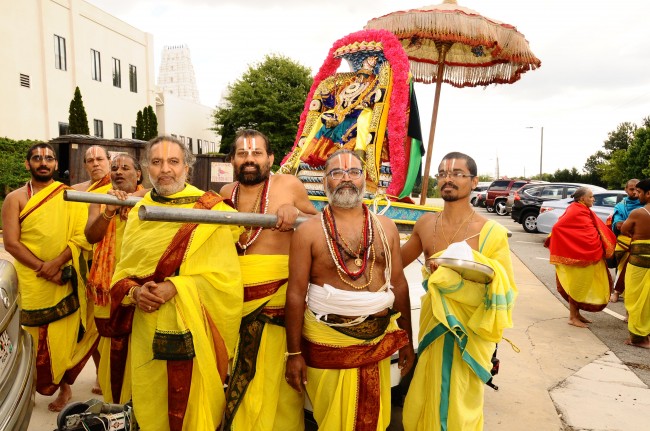 Atlanta, GA: Despite unsettled weather, thousands of devotees from all over the Southeast thronged to the Hindu Temple of Atlanta (HTA) in Riverdale, Georgia to attend and seek blessings at the historic, once-in-a-lifetime, spiritually suffused Rajatotsava Mahotsavam (silver jubilee) for Lord Venkateswara, Sri Padmavathi, Sri Bhudevi Sahitha and Sri Durga Devi Prathishtapana over 11 days, from May 19 to 29, 2017. During the celebrations, Vishwa Shanti Venkateshwara Ashtakshari Mahamantra Yagam & Nava Chandi Yagam were performed to promote universal peace, and happiness, and Ishti Homams for peace and welfare of all devotees, and supporters of the temple. 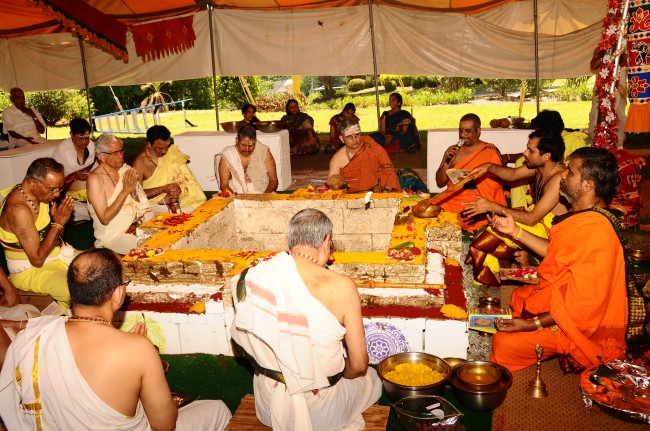 This year, from February 8 to May 20, the Temple also performed Akhanda Vishnu Nama Parayanam and homam. Daily from 19th to 27th May; devotees participated in Chandi Parayanam with Lalitha Trishathi sthotra and Lalitha Sahasranam Kumkum Pooja. Brahmotsavam with all vahansevas to Lord Venkateswara was performed from May 24 to 28. Perhaps the most engaging among the various homams and poojas was Ekottara Sahasra (1001) kalasha abhishekham, Sri Chandi Homam on 28th May, and the ever popular Maha Satyanarayana Pooja. Daily Sri Venkateswara Mulamantra Homam and Ashtakshari Homam were performed in the morning and evening.  The priests carried the kalasas with coconuts on top, followed by Sri Venkateswara carried in a palanquin covered with an ornate umbrella, to the ringing of bells, thavil and nadaswaram. The enthusiastic, and cheerful devotees joined in the circumambulation round the Temple, showering flower petals.

H.H.Sri Siddheswarananda Bharati Swami from Courtallam India, graced the celebrations with his august presence conferred his blessings to all and gave spiritual discourses on Sanathan Dharma and acharas from May 26 to May 29. 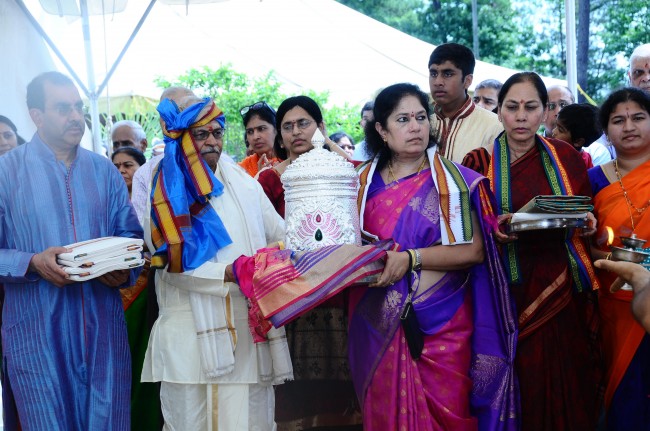 On the final day, in an elegant ceremony, the priests were recognized and felicitated by the HTA for their commendable services.

HTA president Kusuma Kotte effusively commented, “To hold an event at HTA as elaborate as the Balaji and Durga Rajathosavam celebrations, we would generally require over one year of planning. With the blessings of Sri Venkateswara Swami, however, we accomplished our goal with only 4 months for preparation and fundraising. We started Sahasranama Parayana in February, and subsequently we began outreach programs with Srinivasa Kalyanam and Durga Pooja. We had one event in Marietta as well as two events in Cumming and Suwanee. Over the next several weeks, we held an additional over 15 successful outreach programs in individual homes. We made this happen, with the help of the HTA pooja committee, executive committee members, and especially very dedicated, disciplined and indefatigable volunteers.

Apart from the HTA priests and the 10 priests from India, 20 volunteer priests performed the rituals during the event.  The actual celebrations started May 19th and ended on May 29th. On the concluding day, it was heartening to watch the priests graciously offering a silver crown to Lord Venkateswara on the 29th after Sahasra Kalasha Abishekam.”

“I would like to personally thank all the priests, H.H.Sri Sidheswarananda Bharathi Swami, the HTA executive committee, volunteers, devotees, and God for making these celebrations a remarkable and blissful success,” the HTA president added.

The founders/trustees, donors, devotees and all associated with the iconic Hindu Temple can justifiably feel proud of the temple’s sterling and exemplary role in enriching the community with rich Hindu culture, traditions and values. It is a thriving and throbbing temple which celebrates popular Indian festivals, hosts classes in yoga and meditation; performing arts; Sanskrit language classes; spiritual teachings;  spiritual discourses by eminent and erudite scholars from abroad; and performances by noted visiting artistes. It hosts visits by students from schools and colleges, tourists and students of temple history and architecture. It supports outreach causes like national or international disaster relief programs and provides educational scholarships to deserving students. In short, the ornate, glittering architectural masterpiece of a temple is playing an exemplary role of being a popular and much revered focal point for worship and learning for the Indian community. Undoubtedly, HTA will continue providing more and still better services to the community in years to come.