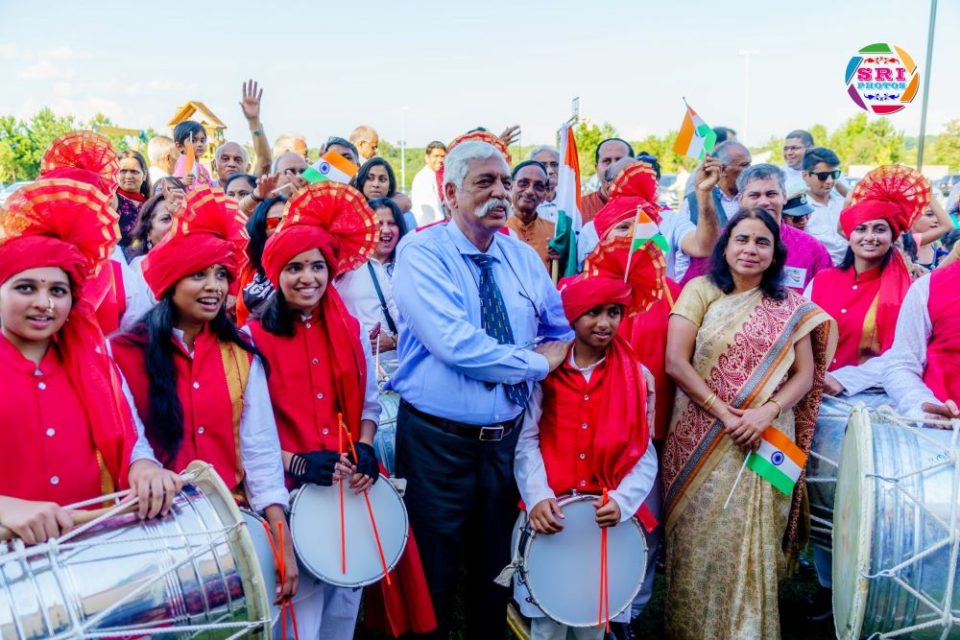 Atlanta, GA, September 11, 2019: “Rituals tie us to our origins. Every time we celebrate Independence Day we go back into history, to re-establish for ourselves who we are. Where we are going depends a lot on where we came from,” quoted Kargil war hero, ex Major-General G.D. Bakshi during his interview with NRI Pulse.

General Bakshi was in Atlanta to kick off the India Day event, a celebration of Indian Independence Day, hosted by FIA (Federation of Indian-American Associations) of Georgia at Gokuldham on August 17, 2019, which had over 5000 attendees gathered to celebrate the occasion.

“The military is an existential requirement for a country like India. And it is a privilege to have a war hero among us to celebrate Indian independence,” said Gokul Kunnath.

“It is an honor to have our war hero presiding the occasion. This is the first time over 65 Indian-American associations from GA and neighboring states of Alabama and North Carolina came together to celebrate the occasion and we are quite excited about it,” said Rajeev Menon.

“It is wonderful to have so many people so excited about the event,” quoted Vasudev Patel.

Excerpts from the interview with NRI Pulse

Maj. Gen. Bakshi has spent much of its post-retirement time researching Indian history, military in particular, based on satellite and carbon imagery, DNA analysis, genealogical studies and such. “We sent our scholars to London where they did their research in the national archives about the transfer of power documents, after identifying the key British decision makers of that era.”

“We have this song, De di hamen azaadi bina khadg bina dhal, implying we got our freedom for free without having to get anyone killed. It sounds very nice, but I’m afraid it is not true,” stated Maj. Gen. Bakshi, adding that he has sufficient evidence to prove that Indian Independence was not completely a result of Ahimsa or Satyagraha. Paying homage to Netaji Subhash Chandra Bose, who led the Indian National Army (INA), Maj. Gen. Bakshi said his contributions played a paramount role in obtaining Indian Independence. “I think we as Indians would be failing if we do not pay homage to and recognize his tremendous contribution in getting freedom to the nation.”

The Quit India movement, launched by Gandhi in 1942, Maj.Gen. Bakshi said, was crushed by the British troops, with every single Congress leader put behind bars. Quoting from a conversation between former British Prime Minister Clement Attlee (between 1945-51), who signed the decision to grant independence to India and the then Governor of West Bengal Justice PB Chakraborthy in 1956, when the former had stayed in Kolkota as a guest of the latter, Maj.Gen. Bakshi said the Chief Justice had prolonged discussion with Attlee regarding the real factors that had led the British to quit India.

During this conversation, Justice Chakraborty has stated in a letter about asking Attlee the reason for a hasty departure by the British in 1947 when the Quit India movement had failed dismally. In his reply, Attlee cited the military activities of Subhash Chandra Bose and INA. Recalling the events back in 1945, Maj.Gen. Bakshi said the British army had just finished fighting the second world war. And in India, officers of Netaji’s INA were put on trial which caused mass uprising among Indians serving in the British army across the country. In February 1946, almost 20,000 sailors of the Royal Indian Navy serving on 78 ships revolted against the Empire. They went around Mumbai with portraits of Netaji. Rebels brought down the Union Jack on their ships. This mutiny was followed by similar rebellions in the Royal Indian Air Force and also in the British Indian Army units in Jabalpur. The British were terrified. After the Second World War, 2.5 million Indian soldiers were being de-commissioned from the British Army. There were only 40,000 British troops in India at the time. Most were restive and in no mood to fight the 2.5 million battle hardened Indian soldiers who were being demobilized. It is under these circumstances that the British decided to grant independence to India, he said.

Maj. Gen. Bakshi quoted from Justice Charaborty’s conversation, “Toward the end of our discussion I asked Attlee what the extent of Gandhi’s influence upon the British decision was to quit India. Hearing this question, Attlee’s lips became twisted in a sarcastic smile as he slowly chewed out the word, m-i-n-i-m-a-l.”

This conversation was first published by the Institute of Historical Review by author Ranjan Borra in 1982, in his piece on Subhas Chandra Bose, the Indian National Army and the war of India’s liberation.

“But the tragedy is, the power was not transferred to Bose, or the INA. And Nehru’s first action after gaining independence was to appoint Lord Mountbatten as the first Governor General,” said Maj. Gen. Bakshi, adding that Lord Mountbatten had refused to take INA soldiers into the Indian army and denied any wartime pension. “They died in poverty. INA had a strength of 60,000. 26,000 among them died fighting the British. Do you call that struggle non-violent? 26,000 laid down their life for India and you will not find one stone in India which bears their name. They died unsung.”

“Nelson Mandela followed the nonviolent movement. When did South Africa get its freedom? In 1994. If you had remained non-violent, your freedom would have come in 1994, if at all,” deliberated Maj. Gen. Bakshi.

Commending Modi on removal of article 370, Maj. Gen. Bakshi, also lauded the PM for unfurling the national flag at the Red Fort on October 21st, the date of establishment of Azad Hind Government, for the second time in a year, along with a 99-year old INA soldier.

Applauding the Indian diaspora, Maj. Gen. Bakshi said, “I find their levels of patriotism, their love of their country much higher than the people of India.”

“India wants to start defense manufacturing in private sector. We need to have transfusion of technology. Who is best qualified to do it?  The Indian diaspora will have a very great role to play in the future.”