Mustafa Ajmeri welcomed the audience and Jaya Row on behalf of IPN.

“Mrs. Jaya Row is an articulate and effective speaker on Vedanta, Indian philosophy and will talk to us about the leadership qualities that are described in the Vedas,” said Ravi Ponangi, in his introduction of Row. Nik Mainthia welcomed Row and invited the audience to join them at Sanathan Mandir for a talk on Pathway to Excellence. 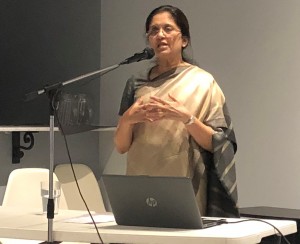 Speaking about “Awakening the leader in you”, Row cited references of Vedanta that provide rare insight into the human mind and can help an ordinary person transform into an extraordinary leader, a leader who inspires people with a higher goal and a common purpose.

“Those with an understanding of Vedanta are able to build effective teams, identify latent talent and help individuals become star performers. It is only when leaders are inspired with a higher ideal that they can inspire team to perform.” she said.

“There are different types of leaders- family heads, corporate honchos, social activists, political leaders and spiritual masters. All these need a strong spiritual base as it is the spirit that lends power,” Row said. She then went on to identify the following traits of great leaders and ways to develop them.

A leader must not want the position. Citing Gandhi, Lincoln and Churchill, Row said they were outstanding leaders because they chose to serve the people and pursue higher goals that were beyond themselves.

Another trait a leader must establish is higher values and be able to communicate their vision to the people.

Row identified impeccable character as another significant trait. “A leader needs to be dedicated to the welfare of the people and never driven by self-interests,” she said.

Following Sva-Dharma or the inner calling is vital leadership trait. Pointing out to the fact that most people simple work to make money and never pursue their passions, Row said, each individual is born with a unique talent and the key is to identify the talent and invest energy in that field.

Clear reasoning of the intellect which is not distracted by the mind is another trait of a good leader, noted Row. “When there is conflict between the two, intellectual judgment must prevail. Disastrous decisions almost always originate in the mind while good decisions are those that are carefully thought out by the intellect.”

Quoting Swami Rama Tirtha, she said “Intense work is rest”. Working hard is an essential trait of the leader. “There are three types of actions – Niyatam or obligatory actions, Kamya or desire-driven actions and Nisiddha or forbidden actions. Vedanta urges you to perform obligatory duties free from attachment.”

To work in a spirit of service and sacrifice for a higher ideal is a necessary trait. To look beyond yourself and live by higher ideals is the essence of a good leader she added.

A leader who feels oneness with people evokes powerful response from them. She described how the job gets well done in a spirit of camaraderie.

Objectivity or Sakshi bhava is an imperative necessity of a leader, said Row. In order to evolve spiritually, the leader needs to take the stand of an actor playing his role and play the role to the best of his ability. It is like an actor performing a role of king or a servant. Each situation calls for a role and once it is played out, the actor goes back to being his self, unaffected by the role he played, she explained.

Identifying the three main qualities of human nature, Row said a good leader must always pick Sattva or purity, over Rajas or passion and Tamas or apathy. Rajas is an agitated state of mind fueled by desire and Tamas is a lethargic mind. A Saathivika state of mind breeds effective, creative and unselfish leaders, the Rajasika blunders through life and the Tamasika is steeped in ignorance she said. 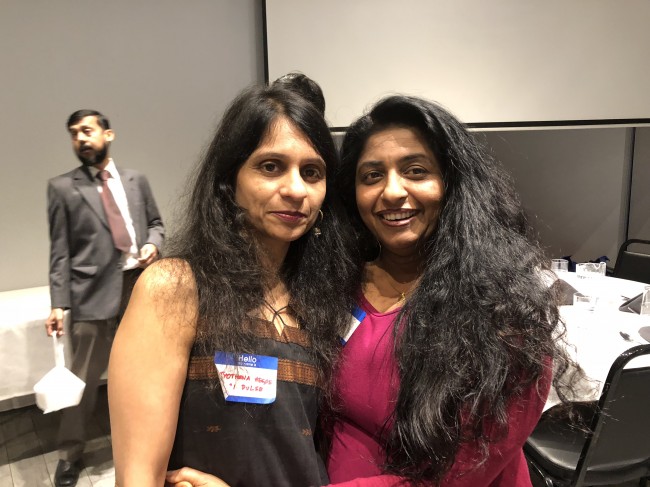 Citing the example of how children learn from what parents do verses what they say, Row said it is important for a leader to walk the talk as he leads the way. It is important to lead by example and simply preach, because people, like kids, follow what you do and not what you say.

Row was in Atlanta for two days. She has been touring the United States, United Kingdom, Europe and other countries for the last several years and has spoken at prestigious organizations including the World Economic Forum, Davos. KPMG, Deutsche Bank and MasterCard in New York, Google, VISA, Genentech & Intel in California, Shell in London and Stockholm School of Economics and many more organizations have invited Row for her seminars on leadership, motivation, stress management and other topics. Her talk for the Consul General in San Francisco last year was very well received.

BBC expose on Bollywood's casting couch has nothing to say