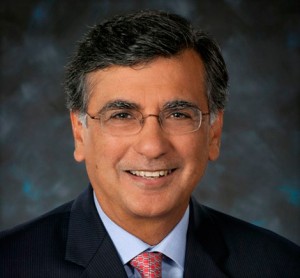 Washington, May 6 (IANS) Mumbai-educated Harish Manwani has been elected to the Board of Directors of Qualcomm Incorporated, the San Diego, California-based global leader in wireless telecommunications products and services.

An honours graduate, Manwani also holds a Master’s degree in Management Studies, both from Mumbai University. He also attended the Advanced Management Programme at the Harvard Business School.

Manwani joined Unilever in India in 1976 as a management trainee and has been with the company ever since in various senior roles across the world.

“We are pleased to welcome Harish as a member of Qualcomm’s Board of Directors,” said Paul Jacobs, chairman of the board of Qualcomm.

“His experience managing Unilever’s global businesses, and particularly his expertise in emerging regions and consumer products, brings insights to Qualcomm’s board as advances in wireless technologies enable new industries and geographies.”

Manwani’s Unilever career has seen him manage businesses across Unilever’s brands and regions.

In his current role, he has global responsibility for all eight Unilever market clusters and is focused on driving future growth and tapping opportunities in emerging regions.

He also is a member of the Unilever Leadership Executive team, which comprises the company’s top management. Prior to this, he served as President, Asia, Africa, Middle East and Turkey since 2005, and the region was later extended to include Central and Eastern Europe.

This was Unilever’s largest and fastest growing region. In 2004, Manwani was appointed President, Home and Personal Care portfolio in North America, where he focused on strengthening Unilever’s competitive position in a key region.

He has also served as President, Home and Personal Care in Latin America, with full P&L responsibility, and was also Chairman of Unilever’s Latin America Advisory Council.

Manwani sits on the board of Whirlpool Corporation, Pearson plc and serves as the Non-executive Chairman of Hindustan Unilever Limited.

He also serves as director of The Economic Development Board, Singapore and member of the Executive Board of the Indian School of Business.

In 2012, Manwani was conferred the Public Service Medal (Friends of Singapore) by the Singapore Government. In 2008, he received the CNBC Asia Business Leader of the Year award.