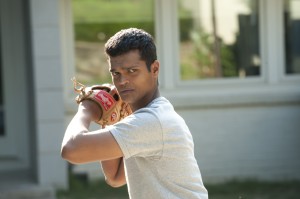 New Delhi, May 7 (IANS) A pivotal role in Danny Boyle’s Oscar-winning “Slumdog Millionaire” was the turning point in Agra-born Madhur Mittal’s life. Now awaiting the release of his new Hollywood movie “Million Dollar Arm”, he says Hindi cinema is going through a great phase, but he’s getting more offers from Hollywood than from Bollywood.

The 27-year-old says “Slumdog Millionaire” opened the “floodgates” for Indian actors in the western world in many ways – for one, “luckily”, he says, foreign filmmakers are looking beyond the “stereotypical” roles for an Indian.

“It’s changing…Luckily, I have been offered the chance to play a South American, Hispanic and even a character from the Middle East in films. There are also a lot of TV series in the US that have a strong presence of actors from India,” Madhur told IANS from Mumbai.

In “Slumdog Millionaire”, Madhur played the older version of the rugged character Salim Malik, brother of protagonist Jamal Malik, a role essayed by Dev Patel. Madhur says the success of Boyle’s rags-to-riches drama generated “a very high awareness” about Indian talent and cinema across the world.

“There are a lot of people who love the grandeur of our cinema and there is a huge audience for that too. It’s a great phase to be an artist in these times,” he said, pointing out the multitude options available nationally and internationally.

On the home turf, it is directors like Imtiaz Ali, Q (Quashiq Mukherjee) and Anurag Kashyap whose style of filmmaking intrigues and attracts Madhur.

“These filmmakers’ movies have some great writing, and their films are not about who stars in them, but about the story,” said Madhur, who began his tryst with acting at a young age.

Before making it big with “Slumdog Millionaire”, Madhur had a brush with Hindi filmdom and film stars like Shah Rukh Khan and Salman Khan as he featured as a child artiste in “Kahin Pyaar Na Ho Jaaye” and “One 2 Ka 4”.

Is he now getting offers from Bollywood at all?

“Not as much…In fact, there are more offers from Hollywood. And a lot of exciting ones,” he said.

For now, he is kicked about the Disney film “Million Dollar Arm”, which is releasing Friday, a week before it hits screens in the US.

It’s a biographical drama about real life baseball pitchers – Indians Rinku Singh and Dinesh Patel, who were discovered by sports agent J.B. Bernstein after they won a reality show. That’s quite an Indian connect in a Hollywood film!

“Yes, in fact, there is a lot of Indian connect in ‘Million Dollar Arm’. It is about two Indian boys, and we even shot quite a bit of the movie in India. Composer A.R. Rahman and sound designer Resul Pookutty (who teamed for ‘Slumdog Millionaire’) have reunited for the film.

“There’s also a bit of Hindi…so yes, the Indian connect is there,” he added.

The film not just gave Madhur a chance to bond with his co-star Suraj Sharma, the young boy who grabbed eyeballs on foreign grounds with “Life Of Pi”, but also “Mad Men” star Jon Hamm, who he says is “a true gentleman”.

“Jon Hamm is such an amazing co-star. He used to set the tune of the scenes so easily and in his free time, he didn’t mind giving us cues. We picked up a lot from him,” said the actor, who reprises Dinesh Patel’s part in “Million Dollar Arm”.

He is glad he got a chance to spend time with the real life Patel, who helped him to get the body language and stance of a baseball player bang on.

Harish Manwani elected to Qualcomm board