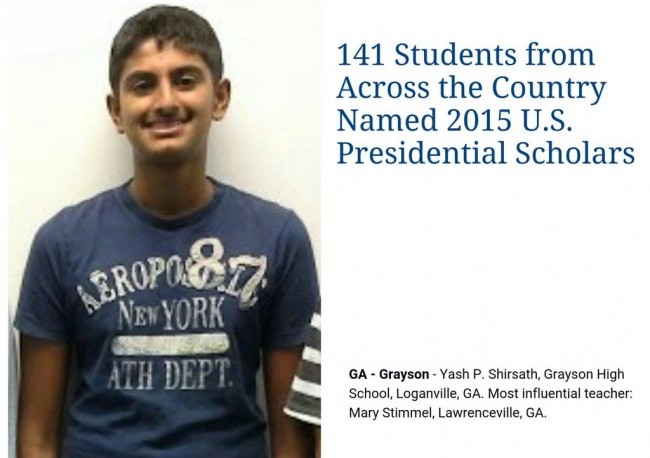 Atlanta, GA: Grayson High School senior Yash Shirsath has earned one of the top academic honors in our country… recognition as a 2015 U.S. Presidential Scholar. Shirsath is one of only 141 students nationwide to receive the honor and one of only three Georgia students selected. Of the three Georgians selected for this honor, he is the only public school student. The Grayson High senior is the school’s 2015 salutatorian and will attend the University of Pennsylvania where he plans to major in computer engineering, management of entrepreneurship, and innovation. Shirsath also has been awarded a National Merit Scholarship.

Since 1983, each Presidential Scholar has been offered the opportunity to name his or her most influential teacher. The teacher chosen for recognition by Yash Shirsath is Mary Stimmel of Grayson High School.

The U.S. Presidential Scholars Program was established in 1964, by executive order of the President, to recognize and honor some of our nation’s most distinguished graduating high school seniors. In 1979, the program was extended to recognize students who demonstrate exceptional talent in the visual, creative, and performing arts. Each year, up to 141 students are named as Presidential Scholars, one of the nation’s highest honors for high school students. Of the three million students expected to graduate from high school this year, more than 4,300 candidates qualified for the 2015 awards determined by outstanding performance on the College Board SAT and ACT exams, and through nominations made by Chief State School Officers or the National YoungArts Foundation’s nationwide YoungArts™ competition.

Yash Shirsath and the other 2015 U.S. Presidential Scholars will be honored for their accomplishments in Washington, D.C., June 21-23.

Hindu population up in the US, becomes fourth-largest faith