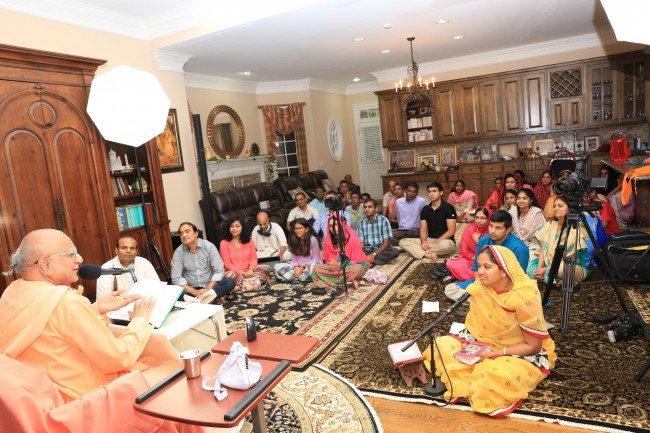 Shrila Maharaj, one of the foremost speakers of Bhakti Yoga and preacher of Vedic scriptures, gave discourses from the 11th Canto of the Shrimad Bhagavatam. This section is also called Shri Uddhava Gita where Lord Shri Krishna instructs Shri Uddhava, a friend and  an ardent devotee of the Lord on the science of Self Realization.  Shrila Maharaj presented this great philosophical treatise with indepth explanations. 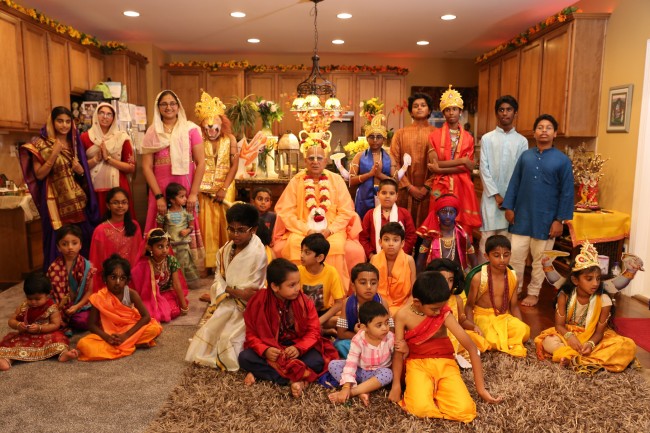 When Brahma and other demigods, after offering prayers to Lord Shri Krishna, requested the Lord to return to His own abode, Uddhava, anticipating separation from the Supreme Personality of Godhead, was very distressed and prayed to Shri Krishna that he might accompany the Lord on His return.  After hearing Uddhava’s prayerful request to be taken back to the spiritual world, Lord Shri Krishna informed him that He was indeed desirous of returning to His own personal abode because the purpose of His descent had been successfully fulfilled and the misfortunes of Kali-yuga would soon beset the earth. The Blessed Lord thus advised Uddhava to take up sannyasa by fixing his mind upon Him.

Explaining the creation and the different species, Shrila Maharaj described how the Lord explains that the human form is most dear to Him :- “In this world there are many kinds of created bodies — some with one leg, others with two, three, four or more legs, and still others with no legs — but of all these, the human form is actually dear to Me.”

The human life is especially meant for the revival of our relationship with the Supreme Lord, and to this end, all kinds of austerities and penances should be accepted. By austere activities, one’s heart can be cleansed of material contamination, and as a result one can be situated on the spiritual platform. To attain this perfection, one has to take shelter of a pure devotee and serve the devotee without hypocrisy.

In order to explain this, Shrila Maharaj said that the Lord cites a historical narration concerning the conversation between the greatly powerful King Yadu and a mendicant. Generally human beings work hard to cultivate religiosity, economic development, sense gratification and also knowledge of the soul, and their usual motive is to increase the duration of their lives, acquire fame and enjoy material opulence. After many, many births and deaths one achieves the rare human form of life, which, although temporary, affords one the opportunity to attain the highest perfection. Thus a sober human being should quickly endeavor for the ultimate perfection of life as long as his body, which is always subject to death, has not fallen down and died. After all, sense gratification is available even in the most abominable species of life, whereas Krishna consciousness is possible only for a human being. 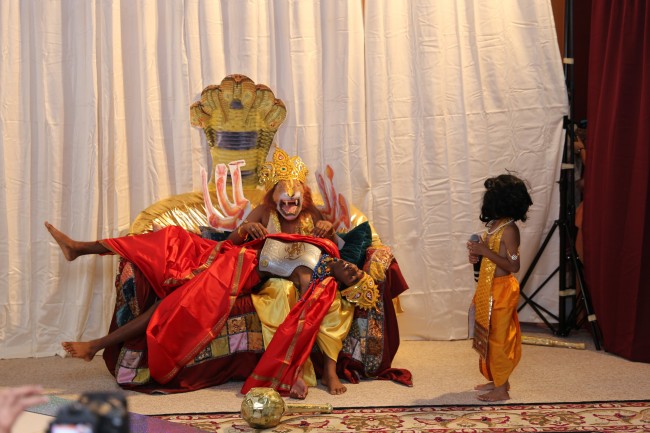 In the chapter where the nature of fruitive activity is described, Shrila Maharaj explained how Lord Shri Krishna refutes the philosophy of the followers of Jaimini and describes to Uddhava how the spirit soul bound within the material body can develop pure transcendental knowledge.  It is also said that the vaisnava, or one who has taken shelter of the Supreme Personality of Godhead, Vishnu, should observe the rules and regulations found in the Pancaratra and other revealed scriptures. The difference between conditioned and liberated living entities, the characteristics of a saintly person and the different aspects of the practice of devotional service are also described to Uddava by the Lord.

Other topics covered by Shrila Maharaj were: (1)The glories of holy association and the superexcellence of the pure love of the residents of Vrindavana, (2)Lord Shri Krishna’s explanation to Uddhava on how human beings, become bound by the three modes of nature, and how to renounce these modes, (3)How He appeared in His form of Hamsa (Swan) before Brahma and the four sages headed by Sanaka revealing to them various confidential truths.

On the final day of the discourse, Shrila Maharaj held a group kirtana session that enthralled the devotees and guests.  Genuine spiritual seekers and devotees from Missouri, Washington DC, Arizona and Texas travelled to Atlanta and attended the sessions.

On September 16, for the pleasure of Shrila Maharaj, Gurukul students from the congregation staged a play depicting the past times of Lord Shri Krishna, one of which is the appearance of Lord Narasimha Deva.  The children wore proper costumes and brought to life, the event that had happened millions of years ago.  The Dasavatara as written by the great vaishnava poet Shri Jayadeva goswami, was nicely portrayed by the young boys and girls. The students had prepared for this event over many months. All the participants were appreciated and awarded with certificates.