Atlanta, GA: Bollywood playback singer Sunidhi Chauhan proved once again that she is one of the most charismatic and energetic live performers in the industry today. For over three hours, the singer energized the nearly full Cobb Energy Center on September 13 with her powerful voice, lithe dance steps and above everything, her ability to engage and stoke the audience. The concert was part of GAPI & AAPI Charitable Foundation’s fundraising mission to promote breast, colon and ovarian cancer awareness.

Dr Naresh Parikh and Dr P.K. Natarajan were the conveners of the concert. Dr Indran Indrakrishnan and Dr S. Jonnalagadda were the co-conveners. Dr. Indrakrishnan was also the editor of the program souvenir. The concert was presented in Atlanta by Paracha Entertainment, and was part of a national tour promoted by Balaji Entertainment. 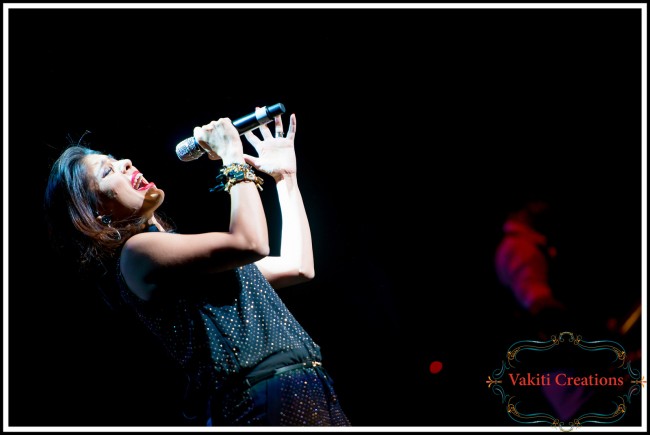 Looking lithe and fit in black and yellow, the power-house performer began the concert with her chart busting, foot tapping dance numbers ‘Dhoom machale dhoom’ (Dhoom 3) and ‘Dance pe chance’ (Rab ne bana di jodi) before progressing to soulful melodies like ‘Tere vaaste mera ishq sufiyana’ (The Dirty Picture), ‘Sajna ve sajna ve’ (Chameli) and ‘Hum cheez hain bade kaam ki yaaram’ (Ek Thi Daayan), which she dedicated to the women in the audience. The second half of the concert began with soft melodies before Sunidhi progressed to a medley of her songs; a compilation of her journey as a playback singer which began when she was only 13. She began with ‘Mehboob mere’ (Fiza) and progressed to ‘Deedar de’ (Dus) to ‘Bumbro bumbro’ (Mission Kashmir) to ‘Bhaage re mann’ (Chameli) to ‘Kamli kamli’ (Dhoom 3) and ended with the recent hit ‘Girls like to swing’ (Dil Dhadakne Do) and ‘Kaisi paheli zindagani’ (Parineeta).

Sunidhi was supported by the very talented Rakesh Maini, first runner-up, Indian Idol, Season 5. Maini regaled the audience with some hit singles, including hits from Ashiqui 2 before joining Sundhi for popular duets. The duo closed with ‘My name is Sheela’(Tees Maar Khan) and ‘Beedi jalaile’ (Omkara).

Nalini Krishnan, a talented singer from Boston and a participant of ‘The Voice India’, opened the concert for Sunidhi.

Sunidhi’s team of Bollywood back-up dancers, a very talented live band and spectacular lighting made the concert a memorable one for those who attended. 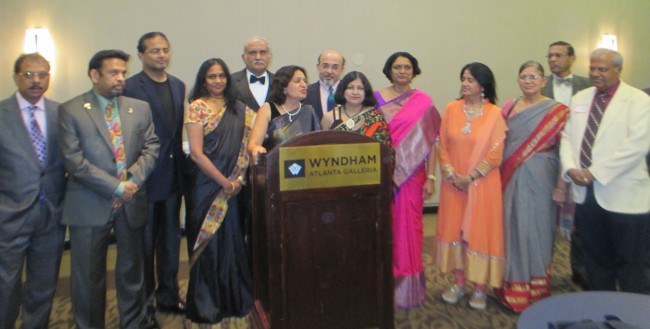 The concert was the culmination of a day-long program that included a medical seminar, including CME, and a banquet at Wyndham Atlanta Galleria.

The funds generated from the concert will be directed towards cancer care related charity, research and educational programs in Georgia.

Dr. Asha Parikh, chair for the fund raising committee announced that this was her pet project and had raised a net profit of close to $80,000. Part of proceeds will go to cancer  research, she added.

Dr. Bhuvana Natrajan, chair for Public Forum spoke about the awareness of breast cancer   in the community at large, and the importance of yearly mammograms. Early detection can save lives. Mammograms can be done for less than $100, she added.

Get Your Wardrobe Ready For Garba