“India is a country that continues to grow and continues to be a vibrant partner of the US,” said Lt. Governor Casey Cagle, in his address. “As we grow together, it is the people-to-people linkage that is exciting.”

He said it was also exciting to witness Georgia’s growth. “We are the 8th largest state in the nation, with the busiest airport, the fastest growing port, and great infrastructure. We are blessed to have Fortune 500 companies along with research institutions present here. All this has made Georgia the No. 1 place to do business for five years in a row.”

“What excites me about tonight is that we can look back at the foundation laid that has given us the opportunity to be where we are today,” he added.

Reflecting on his own childhood- a single mother who worked two jobs to raise him, but never took public assistance; the sacrifices she made and the importance of perseverance she instilled in him- Lt Governor Cagle said each of us is born with a certain work ethic that defines who we become, and India is a great example of that.

“As we go forward as a state, one of our great challenges is to ensure that we do have a work force that is very diverse and committed; that the industries have the workers and the skills that they need.”

He said sadly 25% of Georgia’s kids live in poverty. “We have 40 counties across Georgia that has 40% poverty rate. I don’t believe we have to be trapped in those circumstances.” Education is the great equalizer, he stressed. “No matter what your background, you can always end up successful. We have to constantly do a better job at meeting kids where they are. Designing an education system that meets the needs of the community and the individual skills.”

Lt. Governor Cagle recognized each of the other dignitaries and hosts. “Consul General Nagesh Singh has great passion and love which he brings to work every day, and I appreciate it so much,” he said. “Dr Indran Indrakrishnan is a wonderful friend and Doctor of the Day many times in the State Senate. We have recognized him numerous times not only for his work as physician but also for his service to others. We value that.”

Congressman Rob Woodall talked about folks who have not achieved success, alluding to the fact that Indian-Americans were, through history, severely under-represented in the US Congress. “Up until the 1990s, only one Indian-American, Dalip Singh Saund, had served the Congress. Then came Bobby Jindal (who later became Governor of Louisiana). In the entire history of the country, up until 2008, only two Indian-Americans had ever served in Congress.”

That number has now increased to five today, because of growing partnerships, he said, like the support he had been accorded by Indian-Americans. He cited the example of Dr Indrakrishnan. “When I first decided to run for Congress, Dr Indrakrishnan had opened the doors of his home for me. He calls me often, not to complain, but to talk about ideas that can make a difference in people’s lives.”

Congressman Woodall said he has received the same open heart and outstretched hands from Consul General Singh every day of his service. He hoped Prime Minister Modi would extend the Consul General’s assignment in the Southeast USA.

Mayor Rusty Paul, who celebrated the 40th anniversary of his first election on December 7, talked about his business-promotion visit to India last year. “Your young people are amazing, they are a very impressive group,” he said, adding, “If you are going to invest in the US, there is absolutely no better place to do it than in Sandy Springs, Georgia.”

Earlier in the evening, Consul General Nagesh Singh, in his keynote address, talked about the special bonds between India and the US. “Our Constitution was inspired by the American Constitution. Our preamble also starts with “We the People”. The American Bill of Rights is Fundamental Rights in the Indian Constitution.”

He said, the Constitution of India is a reflection of the ethos of its ancient civilization. Despite its size, a population of over 1.3 billion people and its diversity- eight major religions, 23 national languages, every race calling India home- and seemingly insurmountable challenges that it faced during independence, the country has been steadily moved ahead.

“The Constitution played a great role in India’s growth because it gave a voice to every section of our society. Because of our democratic framework, we have achieved growth in a peaceful manner. In the last few years, India has become the fastest growing economy in the world.”

Consul General Singh admitted that the country still has a long way to go in terms of its socio-economic upliftment, literacy, getting rid of poverty and hunger. “We are confident we will overcome this, but we do need partnerships across the political spectrum, and in civil society. A partnership with the US is essential for our own socio-economic transformation.”

“The India-US relationship is the deepest and the widest of any bilateral relationship we have. From counter-terrorism to defense to healthcare to education and skill development, we have at least 50 bilateral dialogues at the federal level. We also have common challenges– terrorism, climate change, peace and security in the Indo-pacific region.”

Singh said in terms of robust economic partnerships much more needs to be done. “We have targeted $500 billion in India-US trade by 2025. Already, India is one of the fastest growing sources of direct foreign investment in this country. In the state of Georgia alone, we have 60 Indian companies, and not all are in IT.”

The biggest bond between our two countries, however, is the people to people linkage, he said. “Four million Indians have made the US home, and that is the strongest bond which will take our partnership forward.”

“I also pay tribute to the great country that has housed this community. I don’t think this would be possible in any other country. Every day, I hear stories of my countrymen who came with $50 or $100 in their pocket. It is the greatness of this country that it gave them the opportunity, irrespective of their faith or color, to work hard and reach the heights of success,” he said.

Borrowing from Secretary of State Rex Tillerson’s remarks on “Defining Our Relationship With India for the Next Century”, he said India and the United States are “two bookends of stability”. A strong India-US partnership is in the best interest not only of the two countries, but the rest of the world, he concluded.

Sitar master Kakali Bandyopadhyay, who studied with the legendary Ravi Shankar and Ali Akbar Khan, and table maestro Anjaneya Sastry, a disciple of Pandit Prithwiraj Bhattacharjee fascinated the audience with their soulful recital.

John MacDonal added the Bollywood touch to the evening with his melodious rendition of hit Hindi film songs. 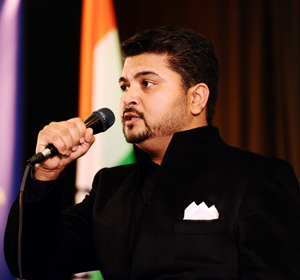 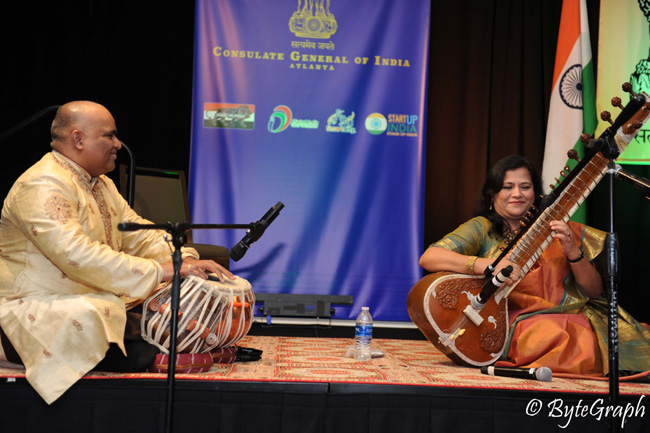