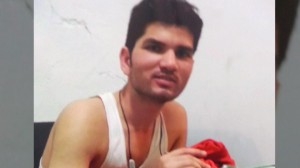 “He was a friend,” said store owner Paltu Roy to CBS46. “He just came to United States not too long ago, like years ago, and he just started a new job for me here.”

The victim was in his early to mid-20s and is from India. He spoke very little English, according to friends, who also said Panday was visiting Atlanta from Iowa and had been in the city for about two months. He volunteered his time at the store helping the general manager out in exchange for a place to sleep in the back of the store.

Capt. Paul Guerrucci, homicide commander of the Atlanta Police Department told CBS46 the shooting may have occurred hours before anybody called the police.  “There’s still a timeline we haven’t established yet,” he said.

The evidence leads detectives to believe that the motive was robbery, he added.

The video shows the victim walking outside to close and lock the security gate on the front door when his attention is drawn away from the building. He freezes in place as the armed robber approaches with his gun raised, and is forced inside, reports CBS46.

Another camera has captured what happened next. Panday is then struck in the face with the gun, and then falls out of frame. A store shelving unit blocks the view of Panday from then on, but the robber is clearly seen pointing the gun in the direction Panday fell. The gunman’s arm jerks as he pulls the trigger. Several more shots were fired with the gunman standing over Panday.

Capt. Guerrucci asked that anyone who was in the area of Norwood Road and Forrest Park Roadin southeast Atlanta Sunday between 9 p.m. and midnight call Crime Stoppers at 404-577-TIPS (8477).