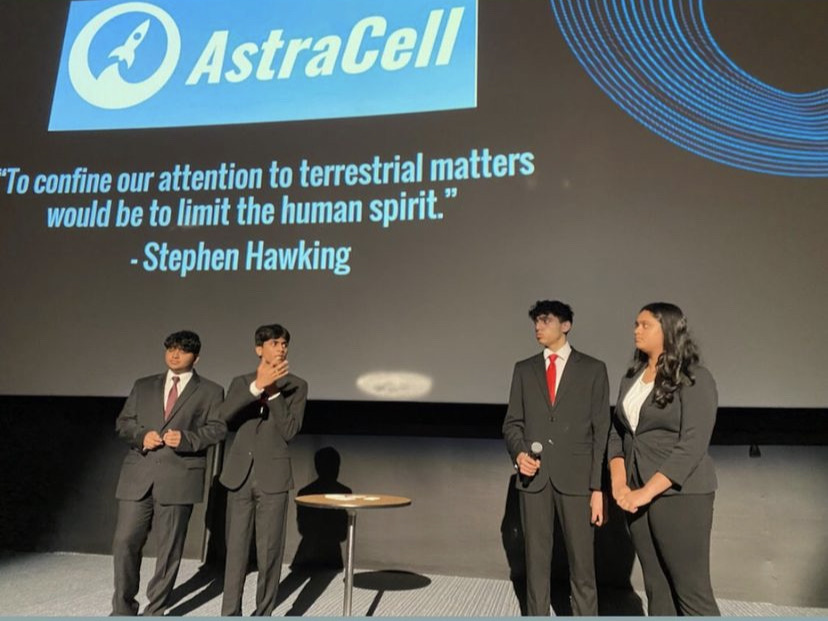 AstraCell uses a patent-pending honeycomb frame inside the fuel cell, relying on an redox reaction powered solely by hydrogen and oxygen gas to produce energy in the form of heat. This is a lot cleaner than the traditional fuel sources for energy cells which often use nonrenewable and polluting fossil fuels.

“We sat down one day and were discussing how NASA had a need for over 10,000 hours for their current fuel cells. While thinking about how to solve this, we had a few conversations about something we learned in biology, and that’s when we came up with the potential for a new biological fuel cell,” Prabhu recalled. “So it was really just our friendship and love for biology that started all this.”

Additionally, perhaps one of the idea’s biggest selling points is that it steers away from the use of platinum, a common catalyst in other fuel cells. Instead, AstraCell uses a platinum-enzyme complex and eventually hopes to completely remove the use of platinum in the future.

“Platinum is not only very scarce, it’s extremely detrimental to extract from the earth,” explained Tatavarti. “With the growing space industry and demand for fuel cells, platinum is only going to be more difficult to use… and that’s why we needed to make the shift to enzymes, which are also often used in energy creation in biological systems.”

The proprietary honeycomb design also allows the cells to be extremely efficient, saving lots of money and space for the aircrafts that employ it. This innovative design is the reason the team has been able to further their research in renowned facilities, such as the Georgia Institute of Technology and the Morehouse School of Medicine. The company also got advice from local leaders in the industry such as Mr. Rahul Saxena from the Create-X program at Tech to help fine tune not only the invention itself, but their presentation and marketing strategies.

All of this allowed the company to win the prestigious Conrad challenge in April after being named finalists in the Space and Aviation category. They also got to attend the Innovation Summit where they were able to participate in workshops, meet other finalists, and present to a panel that gave them immediate feedback, much like the TV show “Shark Tank.”

“It was mind blowing just winning, especially an international-level business competition,” Tatavarti explained. “And the biggest and most important thing we hope everyone takes away from a journey like ours is the connections we’ve made. No matter how well your project does in the competition, the biggest investment comes from meeting all the researchers on the way to developing your project.”

Even outside of AstraCell, all four students have lots of experiences in entrepreneurship and impressive goals and accomplishments under their belt. Mahajan, the CEO, is working on a smart pill to detect cancer in cancer patients and also pursuing research at the Morehouse School of Medicine. Basavaraj, the Chief Business Officer along with Prabhu, is part of the Georgia Honors program and part of Lambert’s iGEM team.

Prabhu is interested in entrepreneurship and is currently working on a quantum computing based crypto mining system, and Tativarti, the Chief Technical Officer, has an internship at Georgia Tech working on electronics and circuitry. Together, the four of them harbor a passion not only for STEM, but entrepreneurship, collaboration, and leadership.

“What’s really important is that through good collaboration, just talking with each other and great communication, we were able to brainstorm certain things and come up with our final solution, which is what we have today,” Mahajan mentioned.

Despite the four rising seniors heading off to college in the coming years, they still have grand plans for AstraCell. By initially introducing the fuel cell technology to smaller industries, they hope to eventually make the big jump to aerospace and use their technology to save hundreds of thousands of dollars in energy spending. Industries such as vaccine transport and submarines can all be benefitted from the invention.

“Our initial idea was to just use it in spacecrafts, but after talking with [advisors], it introduced a new way of thinking,” Mahajan elaborated. “We can introduce our fuel cell technology not just into spacecrafts, but all different types of fuel cell fields such as construction vehicles.”

The entrepreneurs also left useful advice for aspiring inventors. They emphasized the importance of connections and making the most of research opportunities, especially when it came to taking expert advice and changing the lens with which the product was viewed. They also stressed the importance of teamwork and collaboration when starting a company.

“I think what all young entrepreneurs can take and learn is that building a team is actually a lot more important than building a concept because a team can go forever and a concept goes up until you sell it,” Prabhu concluded.

In the future, AstraCell hopes to take its 3-D CAD model and develop a physical prototype, eventually causing a permanent change in the vastly applicable fuel cell industry.