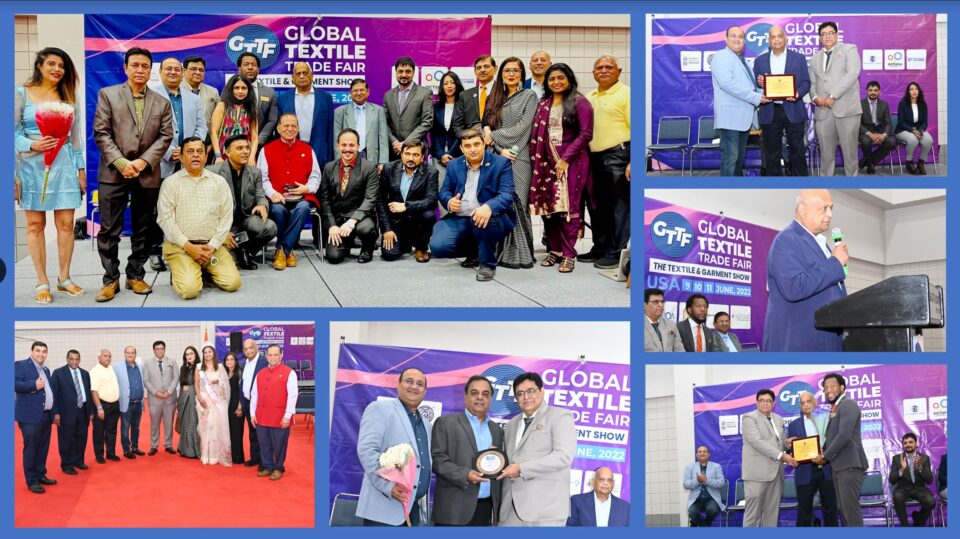 India’s largest MMF textile hub, Surat, produces nearly 60 percent of all India MMF textile production. India ranks second after China in the Textile producing countries in the world. With favorable Indian government policies that allow for 100 percent Foreign Direct Investments (FDI) in textiles, it was only a matter of time before a global initiative was launched strengthen the textile trade relations between India and the USA.

Towards that end, the Southern Gujarat Chamber of Commerce & Industry (SGCCI) launched its first Global Textile Trade Fair (GTTF) at the Gas South Convention Center in Duluth, for textile stakeholders of India & USA to cater to the business possibilities, networking, joint ventures, knowledge sharing, and technology transfers, and to take the textile trade and commerce between both countries to the next level. The first of its kind, the fair is slated to be held in three states of the United States — Atlanta, Georgia, New Jersey, and Los Angeles beginning from June 9. The fair is supported by the Ministry of Textile, Government of India, the Consulate General of India in Atlanta and various American institutions and organizations.

Why Atlanta? “Atlanta has a history of textile. The first textile mills were established in Atlanta in USA, so, there’s a historical connection. Big Importers and wholesalers’ market is here in Atlanta. It’s a business hub of Southeast and also none of kind of a show has been organized till date,” Rohan Patel, Marketing head, GTTF told NRI Pulse. While 70 companies were on board, 45 companies could travel to be at the fair and while most of them hail from Surat, manufacturers from Tiruppur, Mumbai and Noida are also present, Patel added.

The fair was inaugurated by Sebastian Barrow, field representative from the office of the governor. “The Chamber’s performance will go a long way in taking the city of Atlanta forward in the field of textiles. In the future, when the Chamber conducts such demonstrations on a large scale, the Governor’s Office will fully support it,” Barrow said.

The three-day textile show in Atlanta showcased a wide range of products including polyester, nylon viscose, Indoethnic wear, home textile, medical textile, clothing and garments, handicraft and handloom, and khadi, featuring fabrics and styles from Surat and across the country.

“Surat textile industry has recently upgraded their textile manufacturing technology and is now among the world’s best. Its products will surely find relevance in the US market. United States is the largest consumer of textiles in the world. It is also the largest importer of textile goods in the world. Unfortunately, Indians have not been able to capitalize on this huge demand for textile products in the United States,” Ashish D Gujarati, President, SGCCI noted. Gujarati was presented with Congressional commendation for the historic initiative by Dr. Vijay G. Prabhakar, founder chair of US Congressman Danny K Davis’ Multi Ethnic Advisory Task Force.

A delegation under the leadership of exhibition chairman Amish Shah, and co-chairman Harshal Bhagat met the Consul General Dr. Swati V Kulkarni. “The Consul General showed her preparedness for providing all required assistance, organizing meetings for the visiting delegation with the buyers in the US, and involving all the textile associations in Atlanta.” Gujarati said.

The delegation also met Nishant Patel, chairman of the Asian-American Hotel Owners’ Association (AAHOA) in Baltimore, and other hoteliers. Patel is a native of Surat and has recently been appointed as the chairman of the AAHOA. The US Chamber of Commerce has also campaigned for the event.

The Atlanta exhibition will be followed by a B2B and B2C exhibition at Regal Albert Palace, Fords, New Jersey on June 16 and the B2C Table Top Buyer-Seller meeting in Santhom Hall, Norwalk, Los Angeles on June 19. Featuring home textiles, the exhibition will also be attended by hotel owners and associated agents.

Ajit Pant, president, US India chamber of Commerce, Midwest encouraged all to attend and support the first ever exhibition of Indian textile and garment manufacturers. “These initiatives are very good for India and for Georgia,” Anwar Ajmeri, Atlanta resident noted.

“China charges a 25 per cent duty on textile products. So, India has got a huge opportunity to do business through this exhibition. The product of Surat industrialists has been successful in attracting the attention of buyers in USA. Hence, he and some other buyers will visit Surat,” Gault remarked.

Bobby Patel said that the exhibition of the Chamber had received good response from textile traders , industrialists and designers of Indian goods. “Textile manufacturers, which account for 90 per cent of the exhibitors in the exhibition, are directly benefiting from the buyers. Each exhibitor is getting ten to fifteen buyers,” Shah noted. Plenty of buyers visited on the first day of the exhibition. Fabric, Grey, Bleach Fabric, Sofa Fabric, Towel Fabric, Woven Garments and other fabrics were in huge demand. Buyers were interested in buying linen, denim and other fabrics. Dharmesh Desai noted that there is a huge demand for bath robes and bath robes, pillow covers, bedsheets, curtains and bath curtains, home furnishings, table cloths and kitchen cloths in the motel industry and the exhibitors are able to get direct orders to meet the demand of the buyers at this exhibition.

Special recipes to surprise your dad on Father’s Day