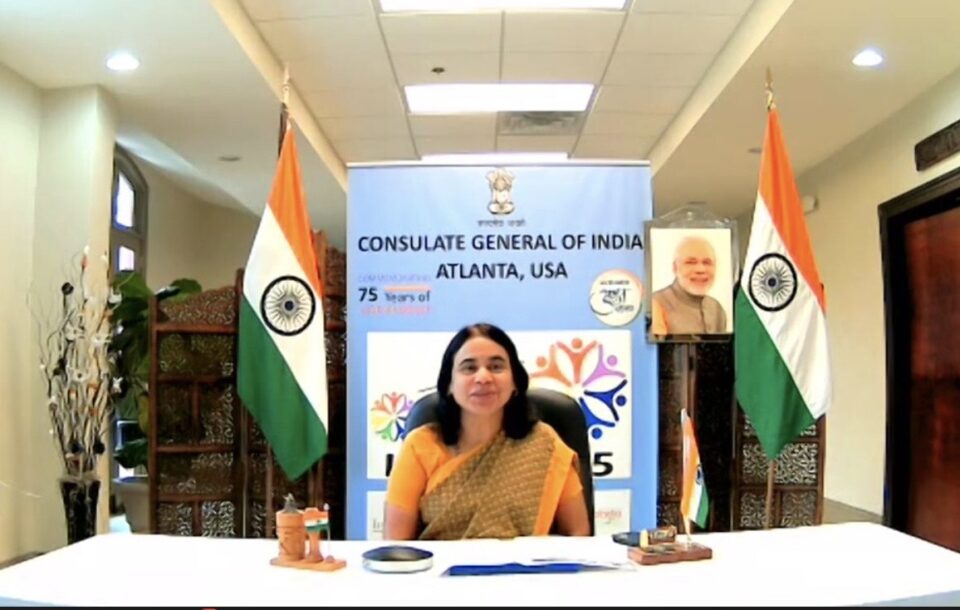 In her inaugural speech, she said, “Government of India will give due encouragement to all efforts made by organized organizations like GIC to spread India’s fame and culture globally. In particular, in the 75th year of Independence Day celebrations of India Azadi Ka Amrit Mahotsav, the organizations should work together to spread and nurture India’s social, cultural, and political visions abroad.” She wished the organization success in all its good endeavors.

The inaugural program of GIC on Saturday, July 30 at 6:30 PM IST was graced by the presence of distinguished dignitaries and prominent personalities from different parts of the world, on a Zoom meeting streaming on various social media platforms simultaneously. Amid silent prayer with national anthems of America and India, GIC’s Chair of Public Relations and MC of the event, Advocate Seema Balasubramanian led the proceedings from Australia.

Sudhir Nambiar, Founder General Secretary, Global Indian Council, welcomed the Chief Guests, Hon’ble Dr. Swati Kulkarni, former Ambassador Pradeep Kapoor, and other distinguished guests, invitees, founding members, office bearers, and brand ambassadors to the inauguration ceremony, which was the first program of the newly formed GIC. And he requested the sincere cooperation of every founding member for the organization’s activities.

The Founder President of GIC, PC Mathew, in his presidential speech, said, “GIC was formed with the right vision and mission because of the necessity of this organization to bring the Indian diaspora from all over the world under one roof. Even so, there is a great need to promote social activities. The general public looks at an organization, on its ideals of the office bearers and members, what the organization delivers to society and the duty and altruism of the office bearers. No movement that is not good for people, will survive. P.C. Mathew said.
Former Ambassador Pradeep Kapoor administered the Oath of Office to the Founding Officers of the GIC, marking its first milestone which will be written in golden letters in the organization’s history, The oaths were taken by raising the right hand.

“It is a pleasure to be a part of celebrating the cultural outlook of our great nation of India today, around the world. India’s yoga, science and technology, medicine, and healing methods inspire today’s world. Efforts should be made to involve the young generation of India in political initiatives wherever they are. An organization like GIC can help coordinate all these and lead progressively”. Former Ambassador Pradeep Kapur, the keynote speaker of the inauguration, added in his inspiring speech.

Prominent social reformer, philanthropist and advocate on women’s empowerment and their higher education, Dr. Ameer Althaf from Tamil Nadu delivered the felicitation speech and promised all cooperation to GIC.
Congressman candidate Sandeep Srivastava, New York Rockland County Legislator Hon. Aney Paul, Kerala State Ex-DGP Rishi Raj Singh IPS, KJ Varghese IFS, TP Narayanan Kutty Ex-Director of Forests, Kamlesh Mehta, Publisher and Businessman New York also delivered felicitation speeches and offered all support.
Dr. Jija Madhavan Harisingh, Karnataka’s former DGP  who plays an essential role in the formation and development activities of GIC and is our Goodwill Ambassador, gave an overview of the future programs planned to be conducted by leading the Art and Cultural Heritage Department of this organization. Along with declaring strong support to the Global Committee officials, Padma Bhushan and Padmasree leaders participated on July 30th and The Goodwill Ambassador said that it would be nurtured through with the support of all leaders.

Renowned dancer and cultural ambassador of India, Kalaimamani Vasantha Vaikunth presented a Classical dance show on the theme of women empowerment which was heartwarming. Since then, video messages sent by many celebrities from different countries of the world were shown.

The founding members, who are the Chairs of GIC’s Centers  of Excellence, spoke briefly about the sectors they represent and what they envisage to make the organization’s projects a success.

Dr. Tara Shajan  GIC’s Treasurer, expressed a vote of thanks remembering all honorable guests of the inaugural programs, organizers, and other founding members who coordinated and made this event a success in a short time, especially MC Adv. Seema Balasubramanian and, thus concluding the grand GIC Global Inauguration.