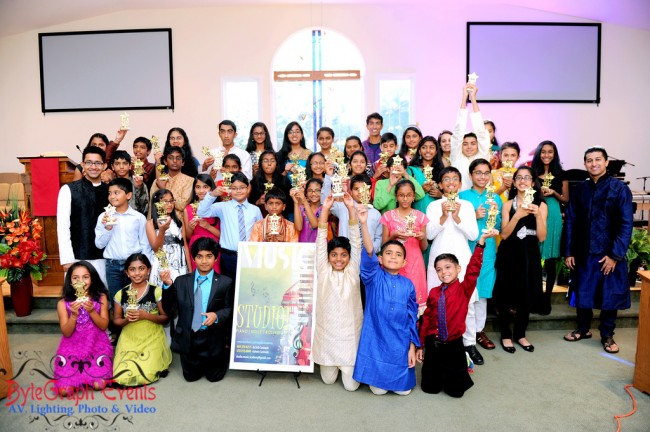 Atlanta, GA: The end of October is usually filled with pumpkins, candy and Halloween decorations. But instead of picking scary costumes, students at Studio! MusicAcademypicked songs to perform for the school’s seven-year-anniversary recital. Students at Studio! learn classical piano, voice and Bollywood piano. This year’s theme, “Musicology”,” showcased three segments: Classical Compositions, Voices and Vibes and Bollywood to Hollywood. Around 150 music enthusiasts graced the Prince of Peace Lutheran Church in Alpharetta on Sunday, October 25th for the piano/voice recital.

Founder/Director of Studio!, Archith Seshadri and Assistant Director/Piano Teacher, Ashwin Seshadri emceed the program that started promptly at 3 p.m. The afternoon began with a group chorus ensemble to “My Favorite Things” from The Sound of Music. This year’s program mixed all genres so that the audience could get a sample of classical pieces as well as the latest Bollywood number. 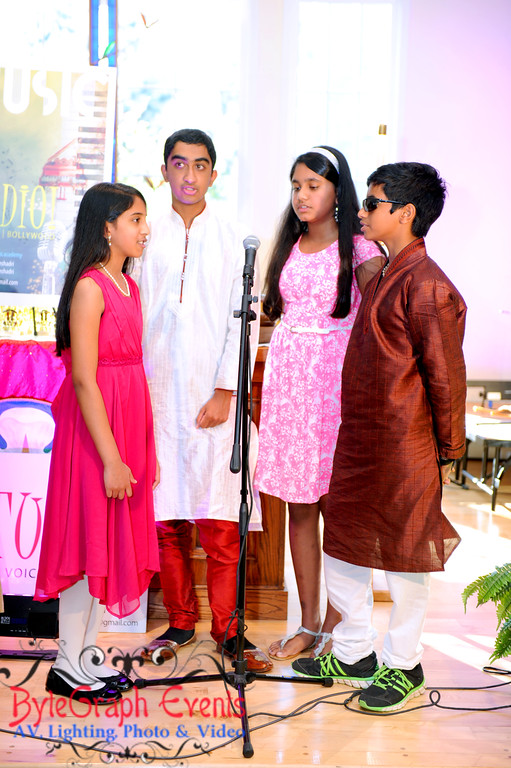 In the classical segment, you had Pachelbel’s Canon in D as well as several Latin inspired pieces including Malaguena and Matador. There were no shortage of popular Bollywood numbers including Balam Pichakari, Titli and Pehla Nasha. The voice students showcased their range with pieces including Puff The Magic Dragon, Let It Go and Colors of the Wind. The recital wrapped up with a group vocal ensemble to Mamma Mia – the popular tune from the band ABBA! 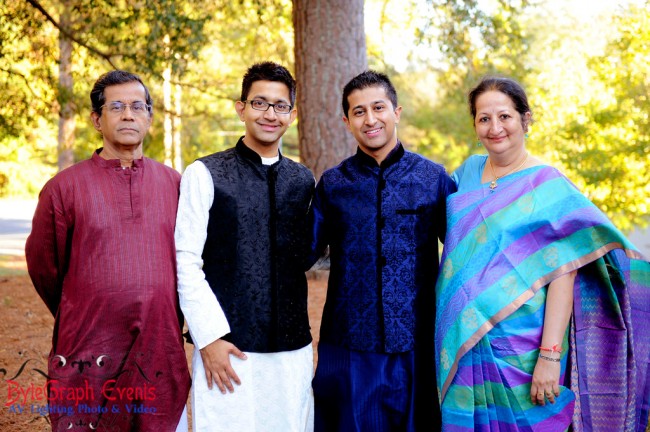 “I’ve always been passionate about teaching and music. We started the school on accident after some parents asked us about teaching their kids. Now that it’s been 7 years, we can truly see the difference in the community. We’ve made so much progress over the past few years and are able to teach so many different styles of music to our students.  When our students’ create their own songs, and win competitions, it’s a gratifying feeling. I think the balance of having young teachers who have grown up with the American way of teaching, but are still embedded with their Indian roots makes Studio! unique. Now that we’ve come to our 7-year mark, we have some exciting ideas for the road ahead,” said Archith Seshadri.

“When the older students played Bollywood songs on the piano, the audience was really able to connect with it. It’s good to pass on what you know to the kids, and you’re teaching them something they’ll remember. It makes a positive impact on them and I feel like we’re role models to the kids,” said Ashwin Seshadri.

“I am extraordinarily lucky to teach so many students at once, and was very proud to hear all of Studio!’s students. I figured that after years of learning piano, I could give back to the music community by teaching it. My favorite moment in teaching is just when my students figure out a concept,” said Prateek Viswanathan.

With an enrollment of 60+ students in 7 years, students at Studio! not only learn different styles of music, but also learn music theory. This helps them read music, and write their songs. Students apply their music knowledge by completing research projects about composers, time periods, and world music. “Teaching students theory is important so that they know what they are playing instead of just memorizing songs. It helps them prepare to become better musicians. It also lays the groundwork for students wishing to qualify for the ABRSM exams. It’s a worldwide certification program where students can earn college credit,” said Archith Seshadri.

Studio! students have also performed at community and cultural programs including the Festival of India and Naach Fusion’s Dance Recital. Studio! is one of the only schools inAtlantathat offers Bollywood piano. “The structured curriculum, flexible schedule and goal-setting methodology really help our students and parents. Students not only learn music but they learn test taking skills, how to be organized, and how to develop stage presence. Parents are given periodic surveys for feedback and students are given exams and report cards to evaluate their progress,” said Archith Seshadri.

Here’s a look at Studio! by the numbers:

Here’s a look at what Studio! students have achieved:

If you’re interested in learning piano or voice lessons at Studio!,you can check out our Facebook page (www.facebook.com/studio.academy) or email us (studio.music.academy@gmail.com) or call us (404.374.4251).