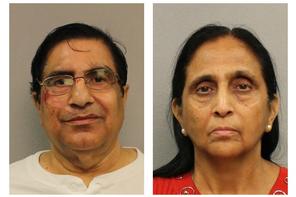 Washington, DC: A biostatistician and his wife were convicted of first-degree murder in Montgomery County on Thursday in the shooting death of the man’s ex-wife on a quiet street last October, reports Washington Post.

During the seven-day trial, prosecutors said the current wife, Raminder Kaur, used a snubnose revolver to fire three rounds from close range into Preeta Gabba, 49. Prosecutors also showed that Kaur’s husband, Baldeo Taneja, was with her that weekend, implying that he was at the scene as well.

Jurors deliberated for seven hours Thursday before announcing their verdict at 5:38 p.m.

Baldeo Taneja, 62, and his wife Raminder Kaur, were arrested last October in Nashville, Tennessee, in connection with the slaying of Preeta Paul Gabba, 49, who was fatally shot on a Saturday morning on a Germantown street, in Maryland state neighboring the capital.

Gabba was found with a gunshot wound Saturday at 7.46 a.m. after people reported hearing gunshots in the area, local TV station WUSA reported citing police. She was transported to a hospital where she was later pronounced dead.

Several witnesses reported that a woman was seen walking near Gabba at the time of the shooting, but she left before police arrived at the scene, police said.

Their plan was deliberate and left behind clues — so many clues, in fact, that Taneja’s attorney, Andy Jezic, argued to jurors that someone as smart as Taneja would not have made such moves.

Taneja enrolled in a gun shooting and safety class. He took notes throughout, according to a teacher who testified, and wrote a phrase about semiautomatic handguns and how they discharge shell casings onto the ground. “Evidence (brass) on the ground,” Taneja wrote, according to his notes, which were found by police and given to jurors.

On Sept. 28, 2013, Taneja and Kaur went to a gun shop in Nashville and bought the snubnose and a longer revolver.“A his-and-hers set,” prosecutor Jessica Hall called them.

In early October, detectives would later establish, the couple spent a Friday night near Gabba’s apartment. Prosecutors asserted they had come to the Washington area to scout out her Saturday morning routine. They returned to Nashville, reports Washington Post.

On Oct. 11, according to data later taken from a GPS device in the couple’s car, Taneja and Kaur drove to Montgomery, checking into a Red Roof Inn in the Gaithersburg/Rockville area. They spent time in Maryland the next morning, and were back on the road, headed for Tennessee by 12:12 p.m.

Just before the two left town, they checked into an Amway conference in the District, something that on its face wasn’t unusual because they also were involved with the company. But the couple stayed so briefly at the conference that prosecutors were able to depict the stop as a cover story to explain what they had been doing in the area.

The detectives started calling gun shops in Nashville — and found out about the Sept. 28 purchases.

The detectives flew to Nashville, catching up with Taneja and Kaur in their car near their home and pulling them over. Inside, they found the murder weapon, the second revolver, a wig, hair dye and about $3,000 in cash.