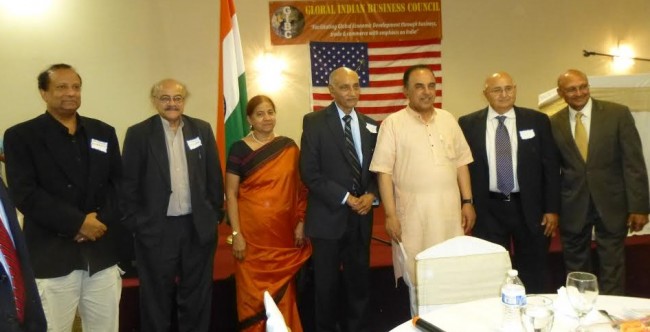 Dressed in his traditional kurta (loose shirt), Dr. Swamy enumerated the opportunities opened by the 18-month-old government under Prime Minister Narendra Modi. Speaking with his usual wit and candor, Dr. Swamy used deep historical knowledge and current economic figures to elaborate his own vision of economic growth of India. He explained the importance and the need for ensuring a level playing field to balance an unfair advantage to MNCs due to cheap and easily accessible Capital in USA and relatively cheap labor and logistics in India. He observed the US multi-national companies could borrow capital at 3% in USA for investment in India and take advantage of cheap Indian labor. On the other hand,India’s own small retail traders face a staggering 12% interest rates within India rendering them incapable of competition with the MNCs from overseas. Yet when it comes to allowing the Indian construction companies to compete/borrow capital in the US market by bringing with them their own lower-paid workforce fromIndia, theUSimmigration offices balk at the thought of cheap labor entering from India. 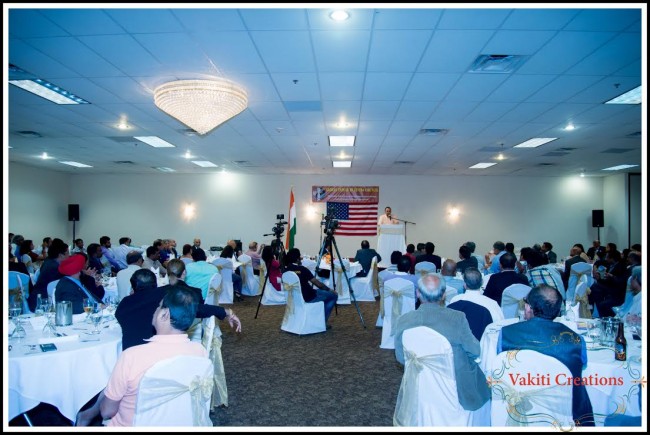 He added, “The foreign direct investment lately has brought unique technologies and fostered innovation in India, primarily due to open heart welcome by the Indian government.” Swamy pointed out that 65% of the growth in the European Industrial Revolution as well as in the more recent American electronics and communications-based industrial revolutions came from innovation, versus less than 35% of India’s Soviet-style development until 1990. Swamy emphasized that India enjoys a huge Demographic Dividend presently with an average age of only 26 years compared to over 40 in Europe and Japan and 37 in the USA. The challenge for India thus is to educate this young population and inculcate risk-taking innovations and entrepreneurship in them. Using the Purchasing Power Parity (PPP) logic, a US dollar is an equivalent to Rs. 24, which hitherto puts, India among the top 5 economies in the world. With China possibly encountering problems similar to those faced by Japan for several decades in the past, India could even rise to become the #2 economy, second only to the United States projected Swamy. Both the US and Indian democracies share the open, transparent structures that are vital to innovation and advancement.

Dr. Swami argued for abolishing the income tax in India, which mostly burdens only the working middle classes and particularly the young professionals.. The annual loss in revenue to the exchequer from the income tax cuts could be easily made up by fairly auctioning communication spectrum and coal rights at market rates. He reiterated that additionally far more investment resources could be freed by bringing back illegally accumulated holdings in offshore accounts in some 70 nations if the Government of India showed the resolve without corruption. 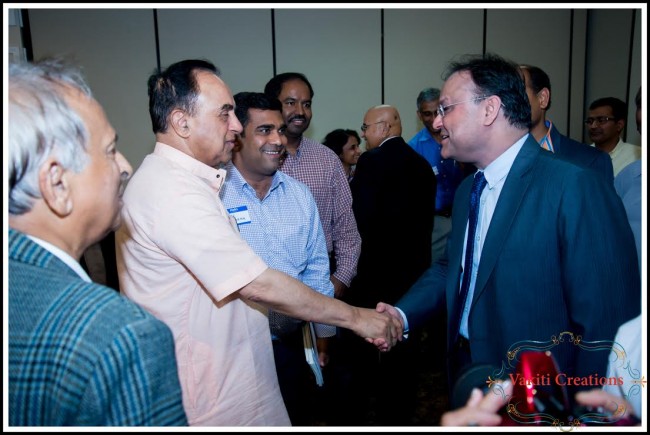 Earlier, welcoming Dr. Swamy, GIBC President-elect Dhiru Shah, praised him for his relentless challenges against corruption in India and for his advocacy in support for economic reforms to liberate the Indian economy from its socialist dogmas and needless bureaucratic shackles. Shah also thanked Nagesh Singh, Consul General of India for his leadership and for making the Consulate General of India (CGI) Atlanta inclusively accessible in its outreach to the entire Indian American community in the Southeast USA.

Outlining the mission of GIBC, Shah stated that GIBC was launched in 2014 in Atlanta with a clear objective of facilitating global economic development with emphasis on India through business, trade and commerce. GIBC has already organized three successful economic seminars in Atlanta and one full day seminar in Ahmedabad in January 2015. To help the US and foreign companies to navigate the Indian rules and regulations, GIBC opened its first full-fledged office in Ahmedabad, India earlier in January 2015.  A second office in New Delhi is to be opened in the immediate future. Collaborations with business chambers in Australia have also been setup, while other similar ventures are in the works.

Introducing CG Nagesh Singh, GIBC VP Ashwin Patel remarked that CG has inspired and won hearts of the Atlanta community with initiatives within two months of his arrival. In his remarks, CG Nagesh Singh welcomed Dr. Swamy adding “Since the time I was in university, I have admired you for all the qualities mentioned by my predecessors but I admired you most was for is that you give it as good as you get.”

Another guest speaker, Sahil Jaggi, International Marketing manager of Atlanta-based United Parcel Service, spoke of the global shipping company’s large and fast-growing presence in India. He praised the initiatives that have made huge improvements in customs clearance and logistics in India, and was optimistic about strides in streamlining the processes and logistics.

GIBC’s Subash Razdan, with his characteristic humor, introduced Dr. Swamy as the charismatic and dashing American-trained professor who had inspired his generation at the Indian Institute of Technology (IIT) inDelhiduring his stint at IIT as the Head of the Humanities Department in the early 1970s.

During the Q&A session, CG Nagesh Singh pointed to the growing India-USA initiatives to boost education in India, including an exchange program with US-based experts. He pointed to Prime Minister Modi’s visit to Silicon Valley and his summit with President Obama as moves in the right direction to facilitate these endeavors. In response to the plight of the farmers, Dr. Swamy pointed to the need to empower Indian farmers with aggressive use of technology to open up global markets for them.

Sushumna Chander acknowledged with thanks all the Sponsors of the GIBC event including Ravi Chander, CEO of Softpath-Systems Atlanta, Dr. Ravi Sarma Medical Doctor of the Suburban Hematology-Oncology Associates and one of the pioneers of the Hindu Temple of Atlanta in Riverdale, Nagesh Kassam, an IT engineer, who coordinates the Patanjali Yog Peeth/Ayurveda store at Global Mall, Vinay Bopana, software engineer/volunteer for the Global Hindu Heritage Foundation and many others

Raman Gandhi was the emcee for the evening.