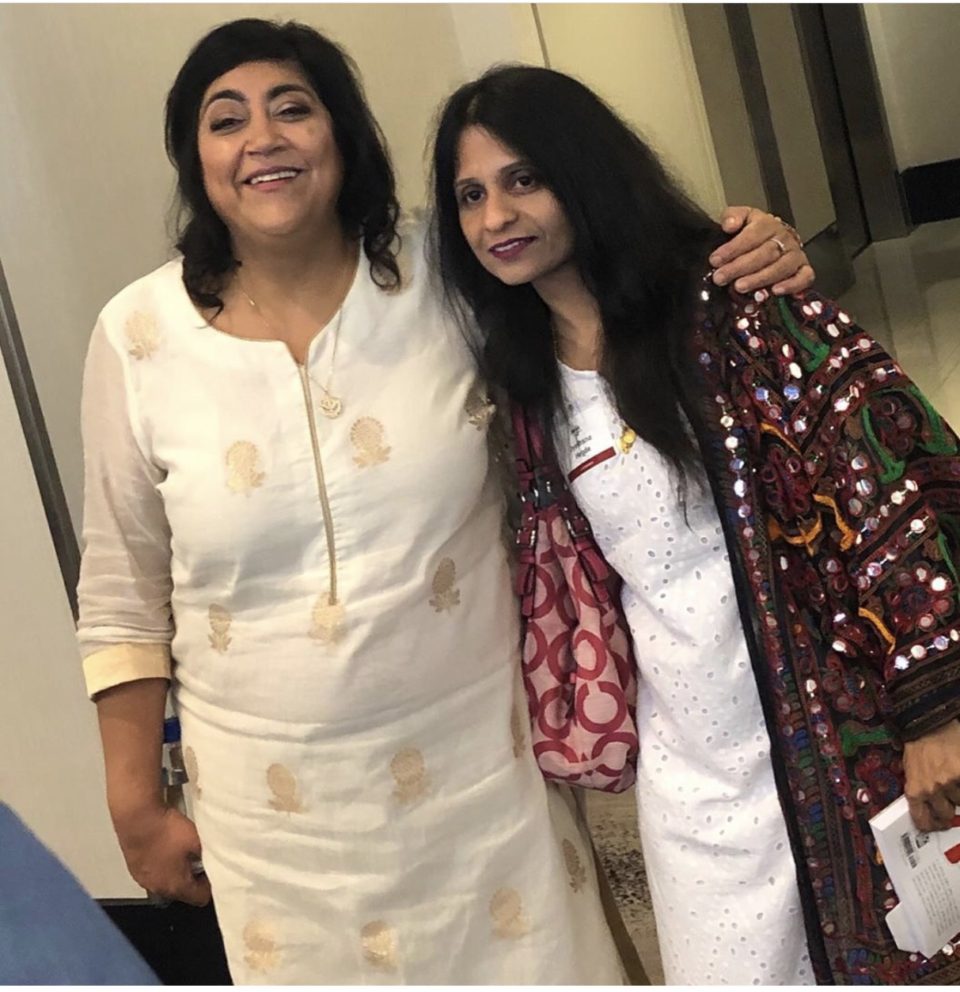 Atlanta, GA: “Being a journalist is not an easy thing right now, especially here, and I realize that the more you are discredited, the more you are put into boxes, and the more you are marginalized, the more powerful you are. And you’ve got to own that power and own that voice,” said internationally acclaimed filmmaker Gurinder Chadha during her recent visit to Atlanta.

Chadha was the keynote speaker at “Represent!” an event celebrating diversity, inclusion and emerging stories and storytellers, on the concluding day of the 38th Annual three-day Asian American Journalists Association (AAJA) convention held between July 31 – Aug. 3 at the Loews Atlanta Hotel.

Chadha’s latest, Blinded by the Light illuminated theatres on August 16th, having received glowing reviews when it debuted at the Sundance Film Festival and certified “Fresh” by rotten tomatoes. Blinded.. is a coming-of-age tale based on journalist and co-screenwriter Sarfraz Manzoor’s book Greetings From Bury Park: A Memoir, depicting Manzoor’s transformative discovery of Springsteen’s music as a 16-year-old Pakistani Muslim living in the London suburb of Luton in the late-’80s.

Chadha, who started her career as a journalist at BBC and went on make breakout hits including Bend It Like Beckham was the perfect choice to address creators and journalists of color represented in the media at the convention.

In a conversation with Lavanya Ramanathan, Chadha held back nothing as she narrated her journey to the top, noting that even with a history of hit films, big corporations still did not back her for Blinded.

Not being able to express herself as a reporter ignited the idea to create her own movies and narrate stories that appealed to Chadha. So, what kind of movies did she want to make? “I wanted to make movies that featured people that look like me, people like me can understand and relate to. Most of all, I wanted people like me to see themselves in the center of frame, as opposed to either in the margins or not at all. But I also wanted it to be appealing for a universal audience and commercially viable, too. Our lives are about struggle, but there is also lot of love and joy. For me it’s about combining both.”

Tracing her path from debutant I’m British But.., Nice Arrangement, Bhaji on the Beach, Chadha was candid about their shortcomings but was quick to state that she had learnt much from them. Recalling how no one ever thought of the idea of a girl of color being the protagonist, especially in a sports setting, football the most popular British sport in particular, Chadha said she had to struggle to gain financing. “You still have to keep fighting. It is about communication.”

Highlighting the key approach to her craft, Chadha said that it was important to underline the similarities between cultures. “What I have learnt is that it is not just about saying this is us and we want to represent ourselves in this way, what I do is say yes, this is us, this is how we are representing ourselves, and look how much we are like you.”

When NRI Pulse asked Chadha what it was about the music of Springsteen, or her own movies that have such universal appeal, Chadha pointed out that it was because both highlight the similarities and struggles that people experience in everyday life.

“Springsteen’s lyrics speak to people directly. Blinded had received acceptance across the board, at all its screenings, with people relating to it on a generic level, about the conflicts between teenagers and parents, rather than talking about the color/culture the boy belongs to.”

“Which ever country I go to, people have the same reaction and the same emotional experience. No one talks about the 16-year-old Muslim boy, but rather about how my dad is this way or that, even in Texas. That is how we move forward,” she said.

“You have to accept and be confident in your own identity,” was Chadha’s message to Indian-American kids struggling with their identities.

“Represent!” included a daylong training and networking with a special screening of AMC’s “The Terror: Infamy” and a panel discussion about how Hollywood is telling one of the darkest stories in our nation’s history, with lead actor Derek Mio, actor/consultant George Takei and showrunner Alexander Woo. More interesting sessions included  discussions about staying true to your creative vision while strategizing and finding the right supporters, how to successfully pitch and find financial support for an idea, ways to conceptualize, launch and fund a must-listen podcast with limited resources, ways to turn passion into a thriving career and a must-follow Instagram account, and women of color in leadership positions in media, arts and entertainment discussed the challenges and opportunities of being a non-white, non-male media boss.

Founded in 1981, AAJA is a professional nonprofit dedicated to increasing diversity in the news and media industry and ensuring fair and accurate representation of diverse communities, particularly Asian Americans and Pacific Islanders, in the media.