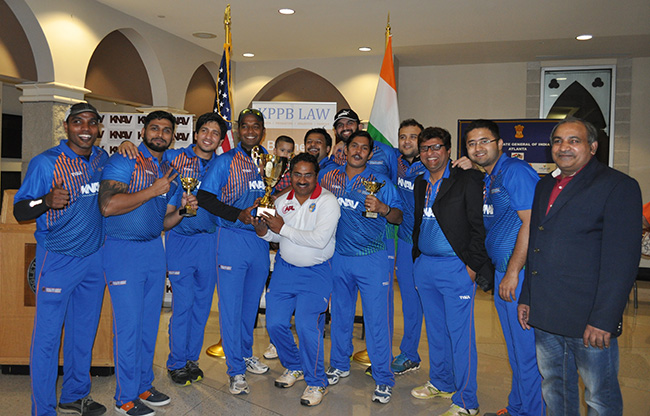 The two teams’ players donning official uniforms (BABC in orange color and GIACC in blue), flanked by two West Indian Umpires Ashan Plummer and Conrad Rogers posed for group photographs and introductions by respective captains.India’s captain Atul Deshmukh opted to bat first after winning the toss-up. The match began promptly at 12.30 p.m. whenIndia’s opening pair of Tanmay and Ketan walked to the crease. West Indian cricket commentator Rula Brown engaged the spectators with his fluent, crisp and oftentimes amusing ball by ball commentary. GIACC made a slow start but later increased the pace with a flurry of shots by Ashish who scored 22, Navneet 26, Nimir 29, Jigar 29 and Rohan 31. BABC Captain Enslin, Wilson, Bedford, Bhatia, Shah, McArthur bowled well but could not prevent the GIACC players from piling up 189 runs for the loss of six wickets in the allotted 20 overs.

BABC opened their batting turn with Wilson and McArthur. The start was even slower than GIACC’s .Rohan got an early wicket. None of the batsmen could last long and wickets fell quickly. Only Newton and Bhatia offered some resistance. Bhatia was playing well but got out to a splendid catch after scoring a breezy 12. And Newton got out after scoring 16. BABC could score only 89 runs. For GIACC, Bikash Kumar took six wickets, Ketan got two, and Rohan, Tanmay and Nimir one wicket each.

After the match, all headed for the Conant Performing Arts Center for Reception and Awards Ceremony. GIACC President Mark Pierson welcomed all and said it was a fantastic match to watch, and commented that weather also warmed up in the afternoon and made it more enjoyable. He then thanked and recognized the sponsors: India Consulate inAtlantafor the food; KPPB Law Firm and GIACC Chairperson Sonjui Kumar for the beverages; Public Accounting firm KNAV in Atlanta’s lead partner Atul Deshmukh for the uniforms for the GIACC Team and Future Tech in Norcross,GA’s Chairman and CEO, Sravan Vellanki for uniforms for the BABC team. He conveyed greetings and good wishes on behalf of British Consul-General in Atlanta Jeremy Pilford-Bedford who was unable to attend due to poor health.

The Consul General of India Nagesh Singh who was in a jovial mood said he felt very happy to attend the reception. While congratulating both teams, he also appreciated GIACC’s efforts at institutionalizing cricket. “It adds value to the friendships we make,” he said, adding that the match reminded him of his days inParisin the late nineties. “There was a big Cricket League. We had Commonwealth XI inWestern France. The then British Ambassador was our Captain. It was a multi-national XI. with players fromPakistan,New Zealand, etc. We played all overFrance. Some of the best memories and best friendships I made was during these cricket matches. We would like to participate more and more (in such sport) in the coming years.”

Pierson presented Nagesh Singh with a blue uniform to wear during next cricket match, and a commemorative plaque. “I have a secret weapon for next year,” Singh quipped.

Pierson then thanked two people he had worked closely with for the event. Atul Deshmukh who is actively involved in the Atlanta Cricket League and Duncan Sandys who is the BABC’s alliances chair and who is responsible for forging relationships with Georgia’s bi-national chambers such as GIACC.

President Pierson and Duncan Sandys have already discussed some ideas for further cooperative events between GIACC and BABC.

Pierson then recognized and thanked the two Umpires Ashan Plummer and Conrad Rogers, Commentator Rula Brown, and Score-keeper Asheen for their commendable services. (Asheen did the score-keeping for the first time!

While Rula announced the names of the Awardees, Nagesh Singh presented the trophies, as under:

James Anthony received a commemorative plaque on behalf of Jeremy Pilmore-Bedford from Pierson.

In his brief remarks, BABC President James Anthony gave his appreciation for the organizers of the match and vowed that the British team would be more competitive next year.

“Let’s make it bigger and better next year. Spread the word” he said. “We wanted to have this match not only to build camaraderie between the GIACC and BABC members but to also raise the profile of our two organizations in Atlanta and Georgia.”