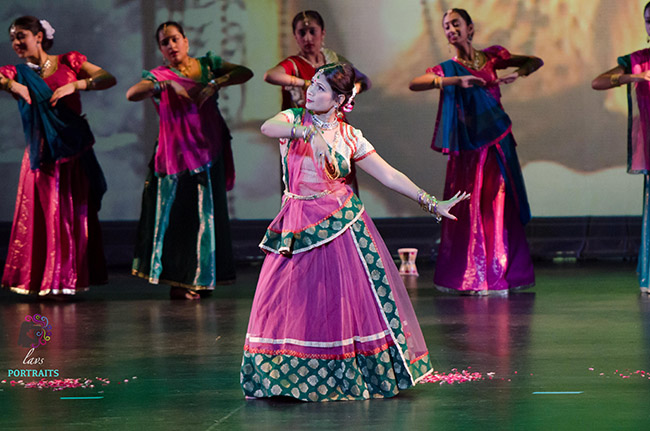 Atlanta, GA: Each year Atlanta’s premier dance and music academy Geet-Rung School of Dance and Music showcases its annual program that coincides with Mother’s Day. Following the trend Geet-Rung presented another spectacular dance show ‘Naari’- A tribute to woman on May 10th at Gwinnett Performing Arts center. As always the event was dedicated to the worthy cause of St. Jude Children’s Research Hospital, all proceeds to be donated to St. Jude to help find cures for childhood cancer, and where no child is denied treatment.

The evening started with the invocation song ‘Omnamah Shivayh’ gracefully danced by Divya herself accompanied by advanced level students. Then followed a series of other dances by students of various age and levels that portrayed the love of Radha and all ‘brijbalas’ for Krishna, longing and a never ending wait of Meera for Krishna, Laxmi as Goddess of wealth or ‘Grahlaxmi’ as Goddess of the home and how uncontrolled passion for either can lead to destruction. Next few choreographies in this segment portrayed the modern woman. With changing time the woman has taken on countless other roles in the fast paced, ever challenging technical world. Further explaining that ‘Naari’ completes a full circle from ‘creation’ to ‘creator’, to be loved, respected, and cherished for her gentleness, compassion, strength and motherhood.  Much appreciated were ‘Tarana’, ‘Liquid dance’ and the fusion piece with the mesmerizing incorporation of Ballet along with Kathak in the first half of ‘Naari’ segment. Narration by Rachna Gupta very well linked the entire presentation. Stunning backdrops by Lavanya Palaparthy further enhanced it. 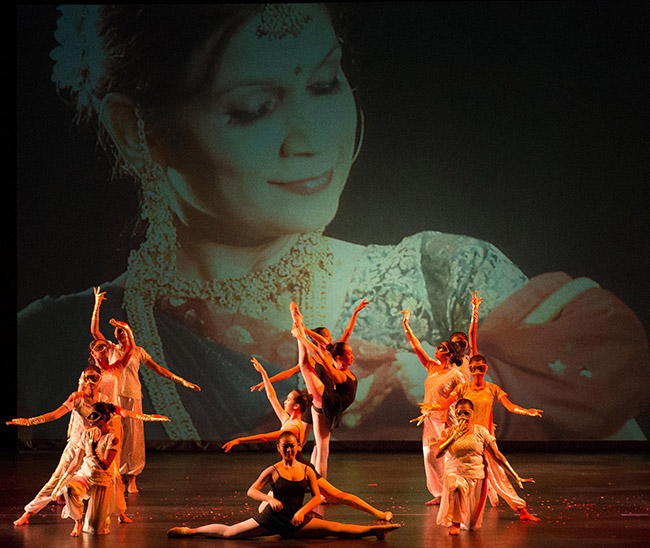 Then was the time for several other students of all ages starting from four year olds and up to come up on stage and show their talent and what they have achieved year long. The diverse age student groups successfully captured the cheerfulness and exuberance of the Indian culture through the kaleidoscope of hit Bollywood dances. Audience were left spellbound with back to back outstanding performances by students on the medley of the songs paying tribute to Bollywood divas. Then the stage got vibrant, students in varying formations, in masks, full of energy, bought the house down with the finale ‘hoton me aisi baat’. The sequences in this dance were challenging, as they needed to reflect the gamut of moods, and finesse and express the mystery and tensed expression of the song.

Very well executed by Divya and her skilled students, and numerous spins in the end, characteristic feature of Kathak dance, left the audience cheering, excited and full of applause.

The Ekal representative Ajay Upadhyaya presented a slide presentation explaining the mission and aim of ‘Ekal’. He thanked Divya and Pankaj for their continued support to Ekal Vidyalaya and sharing their talent to help raise funds for such non profit organizations.  According to Divya Srivastava ‘I want all my students to understand the importance of the community service and how they can use their talent to help others in need’. This not only teaches them great values of life but also gives them self-confidence, motivation and leadership skills’. 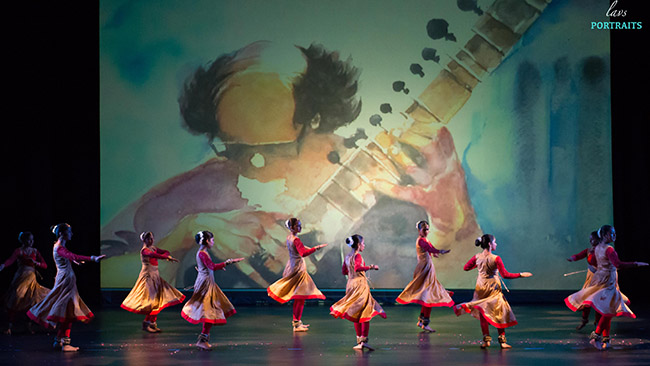 The glimpses of past Geet-Rung events were also shown during the program to keep the new audience informed on the past perforances.

After the grand finale, Divya extended her thanks to student’s parents for their cooperation and support and countless volunteers who had put in hard work behind stage to make the program a huge success. According to her with each year’s recital the student’s caliber is pushed to next level as she challenges them to perfect more complex choreographies and achieve the set goal by the time of the stage performance. She also wished happy Mother’s Day to all the women. Trophies were awarded to all the students, other participants and Volunteers. Student of the year medals were awarded to Pooja Sharma (Madhyama Purna), Kareena Kumar ( Praveshika Purna)  Samiksha Gaherwar (Praveshika Pratham) and Shivangi Panda (Prarambhik) for highest scores earned in the Kathak exams. Certificates were awarded to the top 5 Fundraising students namely Devika Sharma, Manika Bhatia, Aafreen Anjum, Milee Patel and Aria Upadhyaya. Divya was very proud of them and named them ‘five little Angels’ who can bring light in the dark life of children fighting for their lives.

She acknowledged the Manager at Geet-Rung, Shweta Dubey for her constant help round the year and outstanding support during the recital. Stage Light was creatively taken care by Shweta Shetty. Backstage management by Anar Sharma, Varsha Ariyakula and Shreya Dubey. Photography by Lavanya Palaparthy. Sound and Visual by Pankaj Bhargava, Divya’s equally talented husband and Atlanta’s well known singer. 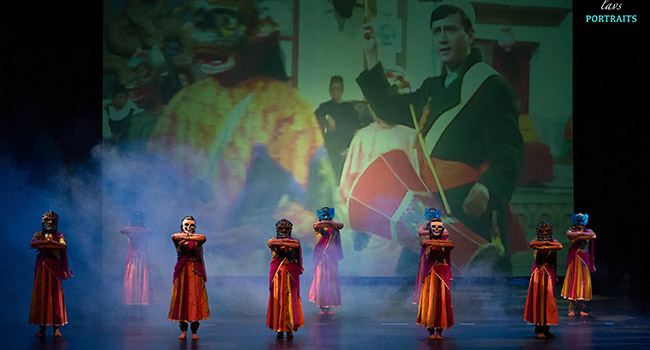 This year’s show boasts to be one of the best in the past. According to one of the student’s parent, Divya’s creativity knows no bound. Slow or fast, Kathak or fusion, Divya can bring life to any kind of composition. According to other, there was no time to blink and every moment of it was immensely enjoyable. Overall, a magnificent show for a noble cause!

Geet-Rung had also hosted a musical evening ‘Shaam-E- Sangeet’ on December 7th, 2014 to support Ekal Vidyalaya of Atlanta and set the record by raising hundred Ekal schools to support education for children in rural parts of India.