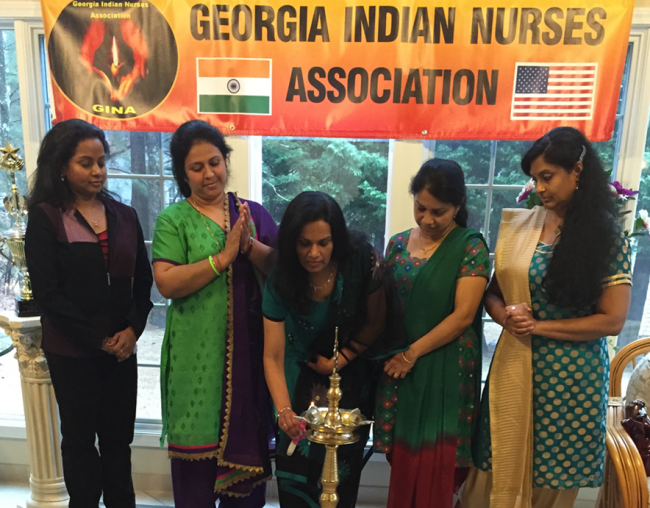 New executive members take the oath and light the lamp.

Atlanta,GA: Georgia Indian nurses Association (GINA) conducted its first general body meeting of 2015 on 2/22/2015 at 5690 Grove Place Crossing,Lilburn GA 30047. The meeting was attended by about 30 nurses.

After a silent prayer, Mini Jacob welcomed the members. The founder and former president of GINA, Mary Jose welcomed all, addressed the general body and thanked each member for its support. She shared GINA’s history and growth and thanked the outgoing executive and general body members for all their support and cooperation.  It was really a heartwarming moment, when she spoke about the achievements of GINA,citing  winning of the Naina’s Ever Rolling Trophy, Naina’s Nightingale Award for Achamma Kokoth and the Nurse Excellence Award for Lilly Anickat. She proudly stated that GINA has currently 135 active members and thanked them for their active participation in the community through various services. 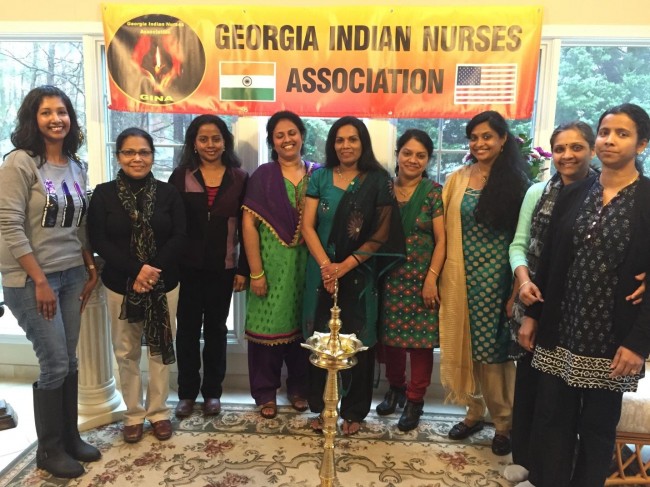 She introduced and welcomed the new executive members and wished them success. Inauguration of the new term of GINA was conducted with oath taking and lamp lighting by the new executive board. The Board consists of President Lilly Anickat, Vice-President Meena Joseph, Executive Vice-President Janet James Kasinathan, Secretary Jecy Mathew, and Treasurer Betsy Augusty.  The new President of GINA addressed the group briefly and requested each member’s whole hearted support. Ms. Shirley Parayil gave a  report of all activities of GINA so far and handed over the secretary’s documents to the oncoming secretary Jecy Mathew. Ms. Betsy Augusty presented the financial report of GINA for the past years. Ms. Cicily Kanjira thanked Ms. Mary Jose for her extraordinary leadership. As the president she was able to empower the members and was able to take GINA to great heights.

Lilly Anickat gave a power point presentation about GINA, its vision, mission and goals. She also talked about the upcoming activities and encouraged everyone to support GINA by renewing their membership and bringing new members to the organization. GINA’s vice president Ms. Meena Joseph gave a vote of thanks for the support and generosity of those who had participated in the meeting.

The meeting concluded with games and snacks.